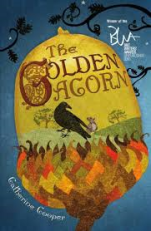 This is the first of a series which turns out to be a charmingly old-fashioned tale of a boy, who, when moving in with his granddad, discovers he is the chosen one to fulfil a prophecy. This involves him being turned into a raven and going back in time to allow the re-opening of a portal into another world. Sounds complicated but it’s not really and Cooper injects a nice feel of myth into the story. I liked the characters, which bodes well for a series. We meet Nora, the kindly old neighbour who is a Seanchi, (a Druid given the task of looking after a sacred grove); Elen the girl who lives with her and befriends Jack; Camelin the raven who is to teach Jack how to fly and Charkle, the green dragonette who has lost his family. This is a likeable supporting cast for a worthy main character and I would like to read more about all of them. There are now five books in this series and it’s certainly worth having a look at.