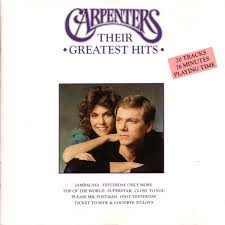 Sometimes it’s just about the voice. I can’t say that I listen to a lot of music like the Carpenters with that blend of easy listening and touches of country but I do listen to the Carpenters and the reason for that is the voice of Karen Carpenter. Rich, velvety and hard to impersonate with phrasing that radiates warmth and reassurance. True, it is often accompanied by the excellent productions and arrangements (and song-writing skills) of brother Richard but there can be no doubt in anyone’s minds who is the real star here. I do have to be in that kind of relaxed mood almost bordering on the melancholy to get the best out of this music. There are tracks which I find painfully sad, perhaps because of the fate of Karen but also because they are sad songs sung with pure sensitivity and knowing, but on this CD you are never that far away from an uplifting sing-along. This CD was released to mark the 25th Anniversary (1969-94) and provides an excellent overview and is really the place to start. Their “The Singles 1969-74” (released in 1974) is their biggest selling album but it has largely been superseded by this 20 track whole career retrospective.  This is the first of my 100 Essential CDs to be a British Number 1 album .

The Carpenters exploded onto the music scene in 1970. Supported by Herb Alpert and signed to his A&M record label for the duration of their career, their version of a not too well known Burt Bacharach/ Hal David track “(They Long To Be) Close To You” topped the American charts and sounded very different from what was around at the time. In a year marked also by the arrival of Jackson Five and with the Beatles and Sly & The Family Stone scoring chart-toppers this track managed to sound old fashioned and yet strangely new. The song itself is a little too sugary for my taste but is rescued from complete middle of the road Ray Conniff territory by Karen’s vocals, complimented by a lovely arrangement and the first introduction of those multi-layered backing vocals used to particularly good effect in the closing bars. We Brits did take a bit longer to warm to all this. In the UK the single reached number 6 and they wouldn’t have another Top 10 single for another two years by which time they had notched up 7 US Top 10’s.

Over the next couple of years the singles released made their first hit seem quite perky. This included their classics “We’ve Only Just Begun”, the lovely “For All We Know” and the Leon Russell & Bonnie Bramlett song “Superstar”. They also scored a number 2 US hit with one of the saddest songs known to man “Rainy Days And Mondays”. Never a British hit, a mournful introduction sets the scene until Karen opens the song with the melancholy; “ Talking to myself and feeling old/Sometimes I’d like to quit/ Nothing ever seems to fit/Hanging around, nothing to do but frown/ Rainy days and Mondays always gets me down”. Such introspection was quite rare in a pop song and although this tale of hovering depression is not autobiographical, by what you know about Karen you suspect it is. It’s a relief when the backing vocalists make their multi-layered appearance and the sax plays its solo to lighten the mood a little. There’s a pain and a rawness in those vocals despite the warmth of the phrasing and the smoothness of the overall sound and that dichotomy is part of what makes The Carpenters great.

In case the feeling drops too low the next track of the CD lifts the mood entirely, “Top Of The World” is a real guilty pleasure. The opening slide guitar introduction should tell me that this is not going to be the type of track I like, but the positivity from the first two lines lifts all of the sadness we’ve experienced in the previous track: “Such a feeling’s coming over me/ (with that lovely hold on the me)/ There is wonder in ‘most everything I see/Not a cloud in the sky/Got the sun in my eyes and/ I won’t be surprised if it’s a dream. A complete about turn from the previous track and it’s impossible not to sing along. Have someone do this as a karaoke turn in a bar and the whole place sings along even in versions that lack any of the warmth of Karen’s vocal. If looking for my favourite Carpenters song this probably has the edge, even if it is because it feels good sharing the good times. I’m probably not going too far out on a limb by championing this track as when released as a single in 1973 it gave them a UK Top 5 and the second of their three US number 1’s. The third of those number 1’s is also quite perky. The update of the Marvelettes “Please Mr Postman” stalled at number 2 in the UK (their highest chart placing tied with their nostalgic “Yesterday Once More” which had also just missed out on the top spot two years earlier). This is a slightly cheesy 1970’s doo-wop version with all the rougher edges of the Marvelettes US chart-topper of 14 years earlier smoothed out and yet it works so well and huge Motown fan that I am may just be the better version. Maybe I’ll leave the jury out on that on. A similar level of infectiousness was also employed in their version of the Hank Wiliams song “Jamabalaya (On The Bayou)” which is another song I shouldn’t like, with its flute intro, definite country twang, bayou animal calls and inauthentic sounding patois, but I do. Growing up this was the only Carpenters single I bought, which is a bit of a confession considering the gems they put out and in my defence a lot of the previous singles were catered for when I purchased, along with most of the rest of the population, their “Singles 1969-73” album with its plain cover in that burgundy-brownish shade which passed for style in the 70’s. Their version of Leon Russell’s “This Masquerade” marks this song’s second appearance on one of my essential CDs (cf: George Benson- “Very Best Of”). Once again the quality of this song shines through although I do think George has the edge here.

So as Karen does not get all the praise, it’s worth considering the song-writing skills of Richard Carpenter. On this CD he has written, alongside John Bettis five of the tracks including two which are close runners for the best Carpenters track – “Only Yesterday” and “Goodbye To Love” which has that extraordinary fuzz guitar solo the quality of which had hard rock fans grudgingly appreciating this track. All these years on it’s still a little bit of a shock when that guitar kicks in and yet it turns this track into something special.

The final song on the album is also something which turned heads when it appeared in 1977. Their career had been very much side-lined by Disco and the two years since their previous Top 10 hit “Only Yesterday” (US-2, UK-7) was beginning to seem like eons and they  were looking somewhat irrelevant. Their decision was not to go along the disco route as so many artists were doing but tap into the other obsession of that time – the space agey-ness of “Star Wars” and “Close Encounters”. The decision was a little strange and the track they produced distinctly so. “Calling Occupants (Of Interplanetary Craft)” is a seven minute opus beginning with a radio being tuned, a radio station phone -in with a Disc Jockey encountering an alien.  Subtitled “The Recognised Anthem Of World Contact Day”, it’s almost a minute before Karen eases in and attempts to calm things down with the assurance that we humans are a friendly bunch. There’s a lot of influences here – John Williams movie themes, Electric Light Orchestra, there’s that fuzzy guitar back again. The whole thing is distinctly odd and it was too much so for the American market where it stalled at number 32. It’s bombastic and grandiose and yet not too far from what Jeff Wayne would turn into a career changing moment with his “War Of The Worlds” opus released the following year. It’s one of those glorious odd moments of Pop, perhaps not topped until Tammy Wynette started singing about ice cream vans on KLF’s “Justified And Ancient”. We Brits have always held this closing track in quite high regard and it gave them their last significant UK hit (number 9).

Everyone needs a Carpenters compilation in their collection and this 20 tracker is an excellent choice. The 2006 “Gold” CD starts and finishes in exactly the same way but exchanges two of the less essential tracks with “It’s Going To Take Some Time” and “I Need To Be In Love”, the two Disc “Ultimate Collection” might be a little too much for the casual fan and I am sure there are lots of gems to be discovered via their studio albums. The “Gold” album seems to be more available (especially in the USA) but this would be the one I would opt for.

At time of writing this CD can be purchased used from Amazon.co.uk for £5.79 and used from £0.93. American listeners can buy used from $4.51. Other Carpenters compilations are available to download from the usual outlets or to stream from from Spotify.