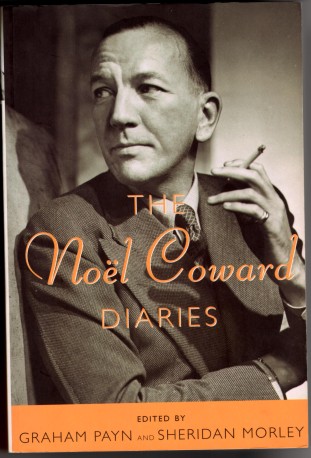 For many years the work of Noel Coward passed me by. I remember being impressed by the film version of “Calvacade” and I went to see a sparkling theatrical revamp of “Design For Living” starring Rupert Graves and Marcus D’Amico without really taking on board how much Coward had been left in the revamp. I had a vague awareness of some of his songs but I probably knew him best for cameo roles in films made at the end of his career such as “The Italian Job” and “Bunny Lake Is Missing” (which scared the living daylights out of me when I saw it on television when I was young). This all changed when I read his diaries and after that I found myself reading his autobiography, his plays and works about some of the myriad of characters I read about in his diaries in rapid succession. I had the book sitting on my shelves for some time and it wasn’t with a huge amount of enthusiasm that I began to read it. I am sure that I had read somewhere that his diaries were largely more of a record of engagements than anything else. To an extent, this was the case, but I was soon drawn in to Coward’s social whirl of places visited, plays seen, films watched and dinners, parties and soirees experienced from 1945 to a few years before his death in 1973. This is not a mere list, you do get some sense of Coward the artist, dashing off plays at a rate knots, confident in them becoming a “smash hit”.

Here is a man whose confidence as a National Treasure shines through.   He is an inveterate name dropper (well, if you can’t drop names in your own diaries where can you?). It is some life and if we don’t get to see the real person as clearly as we do in other great showbiz diaries, for example, Kenneth Williams and Joe Orton, there are more than a few glimpses in his incredibily detailed accounts. He had the knack of being able to fit so much and so many people into a short space of time it can be quite an exhausting read.

“Stayed in bed feeling pretty exhausted. Rewrote the lyrics of ‘Old Records’ for Mary and me to do at the Café on 13th January. Boy Browning came for a drink.

Dined at Clarence House with the Edinburghs. Sat on Queen Mary’s right and she was perfectly enchanting- in more than full possession of all her faculties and did not miss a trick. She is a very great old lady. The rest of the party were Dickie, Edwina and Pamela (the Mountbattens); Princess Alice and Lord Athlone; Lady Constance Milne-Gaskell, who is a dear; and two gents whose names elude me. After dinner in the private cinema we saw “High Treason”. I did not let on I had seen it before because Princess Elizabeth seemed to think it was a new picture.

The Duchess of Kent was at the Café and has promised to come on the thirteenth. Had a drink with her, then with the Dockers and lastly with Mary Spears.”

It was a hard life!! And this was on a day that Coward felt exhausted! If, like me, you could cope with years worth of entries like this then this is a book for you.

The Noel Coward Diaries was published by Weidenfield and Nicholson in 1982. I read the 1998 paperback edition published by Phoenix.