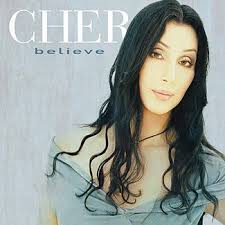 So far in my alphabetical rundown of my 100 Essential CDs we have had 7 albums- 4 compilations and 3 studio albums. With the studio albums a pattern is emerging – we had Dina Carroll’s and Madeline Bell’s first albums and Oleta Adams’ 2nd . I think this pattern will continue in that I tend to favour artists in the early part of their career. This, however, is the CD which bucks the trend, and then some. This was Cher’s 22nd studio album and was released some thirty-three years after her first solo hit. It was a career-changing album, not a comeback as such as she hadn’t really been away but it became her biggest selling album of all time and contained her biggest selling single.

Earlier on in 1998 Cher’s ex-husband Sonny Bono had been killed in a ski-ing accident and this album is dedicated to him. It saw Cher recording predominantly in London with producers Mark Taylor & Brian Rawling with tracks also produced by hot club producers Junior Vasquez and Todd Terry (both had scored chart single hits as artists in their own right). It was an attempt to make Cher, who had been slightly drifting career-wise and was in danger of becoming passé with her rock-chick shtick a relevant artist for the end of the 90’s.

From the title track, which kicks off the album Cher had been transformed. It introduced most of us to Auto-Tune, or more particularly on this track the Digitech Talker FX Pedal. This was a vocal effect employed in the studio which allowed the vocal to jump from pitch to pitch without its natural modulation. This created an almost robotic other-wordly effect. We had been used to vocal effects, particularly the vocoder for some time (used in 70’s hits by Peter Frampton and Herbie Hancock for example) which gave a kind of bubbly, helium-filled robotic tone but most of us had never heard anything like this. “What’s Cher done now?” people were asking, as if it was linked with her visual transformations and cosmetic surgery. Auto-Tune itself became prevalent for quite some time, especially in the hip-hop R&B markets but also a number of pop artists who criticised it as a way of hiding less than perfect vocals were found to have been using it. In recent years it had become a fixture of “X Factor” but Simon Cowell had a change of heart and banned it. In Cher’s case, it was hardly hiding inferior vocals. We had heard her singing for thirty plus years by this time -we knew she could sing. The method of using Auto-Tune in this way has become known as “The Cher Effect.” And what of the song itself? It’s an arm-waving anthem which is enhanced by that altered vocal. It became a number 1 hit single on both sides of the Atlantic and practically all around the world. In the UK it was Cher’s third solo number 1 (1991’s “The Shoop Shoop Song (It’s In His Kiss)” and “Love Can Build A Bridge” from 1995 which had seen her team with Chrissie Hynde, Neneh Cherry and Eric Clapton with inevitable chart-topping results). In the US it was her fourth (her first since 1974’s “Dark Lady – one of her best tracks). It won her a Grammy, she became the oldest female artist to top the American chart and extraordinarily it is the biggest selling single ever by a female artist in the UK- and currently the 16th biggest single of all time- Whitney’s “I Will Always Love You” which seemed to be number 1 forever is 26th on the same list). It doesn’t sound as fresh now as it did then. That’s probably because of over-exposure and also because I knew someone who sang “Rubber glove, Rubber glove” over the vocals in the intro and now whenever I hear it that’s what I hear. I don’t know that I should tell you that in case the same thing happens to you! Nowadays, it is not my favourite track on this album but it sure was a game-changer.

My favourite track is the second single “Strong Enough” (UK number 5, although only reached number 57 stateside). This seems to be a conscious attempt to recreate Gloria Gaynor’s tale of female empowerment from the late 70’s to something along similar lines for Cher in the late 90’s as the spirit of “I Will Survive” looms large. From its piano intro and slow build to its busy string work and Cher’s vocal on a song in which she assures us she will do just fine, even though she has been cheated on. (Who would dare cheat on Cher?)

This is our last goodbye. It’s true

What cruel person said that the reason you’ll never see her cry is because her tear ducts no longer work?! The accompanying video showed a young man creating his perfect woman on computer screen, much to the consternation of his girlfriend- and who was that perfect creation? Cher, ever so slightly sending herself up.

In the UK Cher scored four top 30 singles with this album and these are the four best tracks on the album. “All Or Nothing” (number 12) had the big “Believe” sound and a touch of the Giorgio Moroders in the bridge with “I Feel Love” rhythms and Cher whispering over the top in a nod to the ultimate Disco Queen, Donna Summer. It had that singalong anthemic quality which made its predecessors so successful. “Dove L’Amore” has Latin influences aplenty, an intro which sounds like “Love Theme From The Godfather”, flamenco handclaps and a track which sounds slightly like a slowed down version of the Gipsy Kings’ “Bamboléo” and despite all that it manages to sound authentic and not derivative.

The best of the non-singles is “Runaway”, an edgy dance track with a slow build into a track that resembles superior Eurovision (there is such a thing). This still sounds particularly fresh with its changes of tempo and slipping rhythms, something still used in dance music today.

The last of the Taylor and Rawlings produced tracks is “Takin’ Back My Heart”, a cooler, funkier track which does lack the drive and excitement of the other tracks. What these two producers have done is produced a cohesive sound and one which became very identifiable as the new Cher. In fact, this Europop sound was prevalent on her next two albums –2001’s “Living Proof” and 2013’s “Closer To The Truth”. Of the other producers on the album, Junior Vasquez does a good job on the more relaxed “The Power” with its effective blend of Spanish and rock guitars. Todd Terry’s tracks are not up to the standard as to what has gone before, which explains why up to now I have raved about this album yet only rated it as 92nd on my list. “Taxi Taxi” with its odd lyrics about Pavarotti and the places Cher wishes to be taken to is my least favourite song on the album and “Love Is In The Groove” is not strong. Terry fares better with a remake of her 1988 hit “We All Sleep Alone, turned into a Club song. I’m not a great fan of artists remaking their back catalogue but the song has been transformed and of all the guest productions fits in the best with the overall concept of the album.

Also in this year Cher’s film “Tea With Mussolini” was released. This Zefferelli ensemble piece saw Cher starring with Judi Dench, Maggie Smith and Joan Plowright. I saw it in a weekday matinee showing at a cinema. There had been a lot of rustling of sweet papers throughout from the predominantly elderly audience. In a scene featuring the main actresses about three quarters of the way through the film a lady sitting behind me piped up in a loud voice to her friend – “So which one is Cher?” We did have the giggles for some time. It’s hard to believe that after fifty-plus years in the business someone wouldn’t recognise Cher in a group consisting of her, Dench, Smith and Plowright but that lady in the Brighton cinema that afternoon didn’t have a clue. She obviously wasn’t one of the 20 million worldwide who bought this CD. I think that was the last time I went to a weekday matinee.

The 2013 studio album “Closer To The Truth” saw Cher back in the Top 5 albums in both the UK and US suggesting that she is still a relevant artist some fifteen years after this career boost. Cher has put out some great singles over her 5o years of solo recordings so this album together with a Greatest Hits package would certainly look good in your CD collection or on your I-Pod. In recognition of those fifty years  here are my five favourite Cher tracks