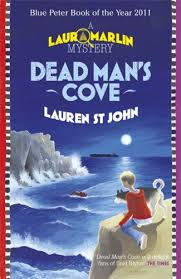 I have mentioned on this blog that I volunteer at my local library and this time last year we were given some money by a local charity to buy some children’s books. We sat down and went through what was available. I had heard about this series by Lauren St John, hadn’t read any of them but knew they had been critically well received and that this book had won the Blue Peter Book Of The Year 2011. The thing that had stuck in my mind was that it was Enid Blytonesque in that it was about a mystery solving child along the lines of the Secret Seven/Famous Five novels. As Enid Blyton books still go out of the library and requests for them still come in I thought a set of the Lauren St John Laura Marlin mysteries would be a good bet. One year on I was looking through the children’s bookshelves and was reminded that I had not read this. I took it off the shelves and discovered, to my dismay, that the book had not been out once since we bought it. I checked it out just so it could have its first date stamp.

Why this book hasn’t gone out is a real mystery and when I return it I think we will need to make a feature of these books as I found it thoroughly enjoyable. Laura Marlin, a fan of detective stories, is rescued from her children’s home when a not previously known-about uncle is discovered living in St Ives and keen for Laura to live with him. St John has given the book a really good sense of location. Reading it made me feel nostalgic for the Cornish holidays I had when I was a child, almost envious of Laura of going to St Ives to live. The uncle, Calvin Redfern, is a recent arrival in St Ives himself and turned up in mysterious circumstances. For the first half of this book I had no real idea as to where it was going plot-wise, St John does a very good job at keeping us guessing and once the plot strands begin to come together it makes for a very satisfying read. Laura is a very appealing heroine and although there are faint echoes of Blyton it all feels very contemporary and without giving the plot-lines away deals with contemporary issues and crime.

For me this seems to be an ideal children’s book. A spooky-sounding title, good front cover, recommendation from Blue Peter, a good lead character and a well-told story so why the children of the Isle Of Wight are shunning it I really don’t know. Hopefully it is because they all have copies at home. It does appeal most to the age group we see the least in the library – the post picture books and easy readers but pre- teenage reader. It was because we thought there might be a shortage in the confident young readers books that we chose this series. I do acknowledge that it’s not immediately exciting and has quite a slow build but there is much pleasure to be had with Laura exploring her new surroundings before the real elements of mystery kick in.   I’m very pleased to have this series on our shelves. We’ll just have to start pushing them……….

Dead Man’s Cove was published in 2010 by Orion