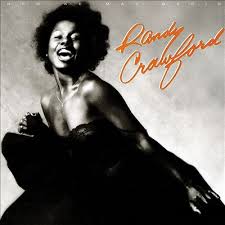 Here is the album which occupies the exact half-way position in my countdown.  It is a ten tracker which features a couple of sublime tracks (two of my all time favourites), has a number of strong tracks, a couple of so-so ones and one which I have never really warmed to.  A bit of a mixed bag but taken as a whole this is an album of some quality.

For most of us our first introduction to the unique voice of Randy Crawford came in 1979 via her lead vocal on “Street Life” by The Crusaders.  It was really one of the sounds of that summer, it tapped into the cool jazz-funk scene which was building in the UK at that time and gave the veteran jazz group a Top 5 hit.  (In the US it reached 36).  Randy is one of a long line of American female performers who have fared better in the UK than in their homeland.  Britain fell in love with Randy’s voice and it was a good move to use The Crusaders (Wilton Felder, Stix Hooper and Joe Sample) to produce her 1980 album.  This was, however, no debut.  It was her fourth album since 1976.  All had been critically acclaimed but sales were not vast.  She had made headway in the US R& B and Jazz album charts with 1979’s “Raw Silk”.  As back catalogue albums the three (all issued by Warner Bros) have been steady sellers.  “Miss Randy Crawford – her second album is particularly worth a listen for stellar versions of “At Last” and “Desperado” and the very nice mid-tempo “I Can’t Get You Off My Mind”.  It was this album, however, which marked her commercial breakout, helped by the success of the second single taken from the album . It paved the way for a bigger chart album next time out- an album which is very strong rather than essential.

The Summer of 1980 saw me in that in-between time of having left school and awaiting my A Level Results.  It was a time of change for me and musically it was about three albums I played all the time which seemed to reflect my new-found independence from school and sophistication that I believed I possessed!  George Benson’s “Give Me The Night” and Randy’s album both had a very coherent sound which stretched across the album.  They were cool as well as adult.  They felt like serious music but were a lot of fun.  The other, Grace Jones’ “Warm Leatherette” felt like it might be the future of music.  Of these three it is Randy’s that has best stood the test of time.

The album opens with a track which is decidedly uptempo for Randy, but Disco still had a major presence in the charts, even if as a musical genre it was getting past its creative prime.  “Last Night In Danceland” is such a classy track, not quite disco, not quite jazz, but very obviously helmed by The Crusaders as it has a “Street Life” feel.  It is, however, a better song and is sung with such charm and control.  It was no surprise that Warner Bros chose it for the first single.  More surprising is its lowly chart position of 61, but it would have been jostling with Abba, Boney M and Olivia Newton-John for radio airplay.  The song is both joyous and very sad and so is perfect for the voice of Crawford which is able to convey the same mixture of emotions – vulnerability with a smile.  The guitar intro sets the groove for this track, even before her voice eases in.  It’s a tale of “love songs and loneliness” with sterling instrumental work from The Crusaders.  If this had been released after the big hit it would certainly have made it two in a row for Crawford, but coming before it had a hasty demise as everyone began to clamour for a certain other track to be lifted as a single, but this is a super opening to the album.

“Tender Is The Rain” feels like an earlier Crawford, with the almost country feel that was present on her earlier albums.  It’s a gentle, slow ballad which is  also slightly reminiscent of her later hit single “Rainy Night In Georgia” and whose country feel is emphasised through the guitar solo.  This is a very pretty but not sensational track. “My Heart Is Not As Young As It Used To Be” is a pretty crass title, but lifts the mood again as it’s a solid uptempo track.  It’s also unusual in that it has a trumpet solo, where we might expect sax, courtesy of Oscar Brashear.

The title track calms things down again with a vocal performance that can only be described as delicious.  On listening to this album a couple of times for the review this is the song that has stuck in my head.  It’s a very well structured song that builds and calms down and sets a solid groove throughout.

The track which has never worked for me is “Blue Flame”.  Lyrically, it’s boastful – “They love me at the record store/I get my records for free/ They love me on the disco floor/because there’s no-one like me” and it just doesn’t suit the vulnerability of Randy’s voice.  It has a stop-start rhythm that never allows it to get going and macho backing vocals.  There is a sudden ending, however, that is quite effective.

Any concerns about that track is instantly removed by the first notes of what comes afterwards, the superb “One Day I’ll Fly Away”.  This song captivated the nation in the summer of 1980, reached number 2 to become her biggest British hit but did not make the charts in her homeland.  This is one hell of a performance and not one that can be covered.  I can’t find much positive to say about the version that was released not too long ago by Kimberley Walsh of Girls Aloud – even though I quite like Kimberley,  it was a misjudged attempt to cover an all-time classic.  This song is all about hope and it’s performed so convincingly that it almost hurts to listen. The orchestra builds and builds and the whole thing threatens to soar into another stratosphere and is that an oboe or bassoon which calms the whole thing down ? Whichever it is it is very unusual to hear on a pop track and very effective.  The song that kept it off number 1?  Kelly Marie’s “Feels Like I’m In Love!  (Boop Boop!).  Sometimes there’s no accounting for taste!

Any track following that is going to struggle and “Same Old Story (Same Old Song)” does have the hint of filler about it.  But  Fly Away” is not actually the best track on this album.  For me it is always the final track “When Your Life is Low”.

The world will change again

And you may have to come back

Through everywhere you’ve been.”

The lyrics of this song speaks to me like few others.  It has the feel of a hymn and stirs up the spiritual in me in its tale of helping someone along their way.  Perhaps it reminds me of the times in my life when things were not so good and people helped out and I’ve fallen out of contact with those people, or even the opposite when I’ve helped someone out;

from stories I hear tell,

you own the world again

and though i never hear from you

you used to love me so

when your life was low

This is human nature we are dealing with here and there is no hint of bitterness in Randy’s voice just a real sense of pride that “you left me shining”.  One listen to this and my faith in human nature is restored just a little.

The follow-up album “Secret Combination” saw a departure from The Crusaders as producers and lacked the unifying sound of its predecessor.  It does have a good range of songs with the odd gem (“You Bring The Sun Out”).  It also became Randy’s biggest album in the UK getting to number 2 and hanging around in the charts for 60 weeks.  Her only return to the Singles Top 5 came 6 years later with the lovely “Almaz”, but the album from whence it came was a distinctly patchy affair.  “Now We May Begin” is a highly successful union of production team and vocalist achieving an outstanding result.  It is an album I revisit regularly.