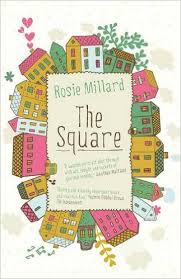 When railings around the park in a salubrious Square in North London are deemed to need replacing with “forged Historic Finials”, some of the residents decide to have an alfresco talent show as a fundraiser. This is the starting point for Rosie Millard’s debut comic novel. Millard is a renowned journalist and broadcaster and has been receiving considerable media attention for this book.  Picture below shows Radio Times interview.

The houses are identical and the residents strive to be as well heeled as their neighbours but recession is creeping into their lives in various ways. For example, one of the families headed by Tracey obtained their house by a Lottery win and have adopted the social markers of private education, au pairs and piano lessons. Their win is being eroded and Tracey is in need of a financial makeover. Behind the identical windows there are affairs to be hidden, supper parties to be endured and some talent to be found for the forthcoming fundraiser.

Millard pokes fun into the social set she inhabits and I hope her neighbours get the jokes. All in all it’s a well paced romp with a good build-up but she doesn’t quite pull out all the comedic stops for the talent show as I was expecting and from this point on I felt a loss of momentum. Most of the women are ghastly and the men not worthy of any of the female lustful intentions. I’m not too sure where the market for this book lies but I found it an enjoyable experience and anyone wanting to experience a North London comedy of (bad) manners should certainly consider this.

I read a proof copy of this book which was published by Legend Press on 1st August.

This review also appears on the nudge books site in their Book Diva Section.  Here you can find a couple of  my other reviews which have not yet appeared on reviewsrevues.com