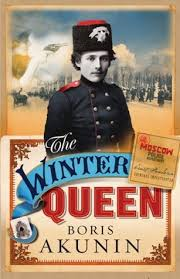 This was my first introduction to Boris Akunin – a big seller in his native Russia. This book appeared in 1998 in his homeland and I read the 2003 translation by Andrew Bromfield.

Akunin introduces us to Erast Fandorin, a young recruit to the Criminal Investigations Department.  He features in fifteen novels to date which take the lead character from his youth in 1876 to 1914. I do like a series that moves on and as those dates encompass hugely significant dates in the history of Russia this seems like a good discovery for me. “The Winter Queen” was shortlisted by the British Crime Writer’s Assocation in 2003 for the Silver Dagger Award (won by “Half-Broken Things” by Morag Joss)

Fandorin is a likeable hero and in this he becomes involved in a Russian (or American) Roulette suicide and uncovers a plot which takes him to London, threatens his life on a number of occasions, gets him promotion and finds him love. Maybe it’s the translation, maybe it’s because I’m not used to reading Russian novels but I did find my opinion of this as I was reading it inconsistent. At times it read very well, at times I found it heavy going. The blurb calls it a blend of Fleming, Conan Doyle and Tolstoy but I’m not convinced that this is ever going to be a smooth mix. Of these three elements it was probably the Conan Doyle I favoured the most and it was entertaining enough to get me to read the next in the series. I’m not going into plot-spoiler mode but the twist would have caused more of a stir if I hadn’t read something along similar lines in the last book I reviewed – Scott Mariani’s “The Mozart Conspiracy”. For me, that was the bit of Ian Fleming in the mix.

I’m not putting the second book “The Turkish Gambit” at the very top of my To Be Read list but I am sure I will get round to it. As this is a chronological series, there is no way I will just be picking Akunin books in random order (I don’t like doing this at the best of times). My need to read books in the “proper order” will over-ride what is available on my local library shelves.  Do you need to read series books in their correct order or is it just me?

The Winter Queen was published in the UK in 2003 by Weidenfeld and Nicholson. I read the Phoenix paperback.