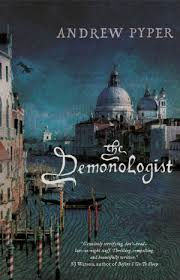 Okay, I’ve let this one go a couple of years now I can get it out of my system.  When this book was released I was lucky to be sent a post a review copy.  Whoever was responsible for sending the books out was a genius because it really was the most sumptuous parcel I have ever received.  The book arrived in a tied brown paper parcel, purporting to come from Venice, with an authentic looking seal and a letter from the Demonologist, the main character.  The whole thing looked delicious, was exciting and just a little bit creepy, which was exactly what I hoped the publishers were trying to achieve.    Top marks for the creative department who thought this up.  I couldn’t wait to read it.  Yes, you’ve guessed it, the book was a let-down……….

My copy was sent on the understanding that if I enjoyed it I would review it favourably on Amazon (I didn’t have the blog site then).  I never posted that review.  I have recently been thinking about books that didn’t live up to the hype so I thought it was about time I put into print what it was that didn’t work for me.  It was a book I should have loved – a blend of horror and action/adventure, a Venetian setting and a very attractive front cover.

Because I am such a sensitive soul I didn’t post on Amazon because I didn’t want the author and publishers to find out I couldn’t rave over the book after all the trouble they had gone to.  The last nine months of reviewing has toughened me up.  I have had a sneaky look at Amazon to see if I’m wide off the mark, opinion-wise and there is the usual mixed views, but with a fascinating spread.  34 reviews are currently listed – ten 5 stars (did they receive the free copy I wonder?) seven 4 stars,  ten 3 stars and seven 2 stars.  Such perfect symmetry needs commenting on……

The whole thing reminded me of another book I should have liked but didn’t, “The Historian” by  Elizabeth Kostova which aimed to take the Dracula story to a new level (only for me it didn’t – nor for the 201/427 Amazon reviewers who rated it 3* or below.  What am I doing looking at these Amazon statistics?  I hardly ever do this!).  The “Demonologist” attempts to give a new sheen to the work of John Milton and his “Paradise Lost”.

Demons make contact with David Ullman, an American Milton specialist and steal his daughter.  This is his quest to get her back in what is truly a race against the Devil.  The main reason it doesn’t work is because it is written in present tense, which is not in itself a bad thing, but leads to a sense of disappointment if you are trying to build suspense.  It means that some of the scary things that happen when the main character is not around have to be reported rather than allowing us as readers to experience them.  I feel instantly cheated and I’m surprised that this wasn’t pointed out before publication as it seems to me to be a considerable flaw.

This, however, might mean that the plot would work better as a film and I noted that Pyper’s previous novels are in development as films.  Visually, with its Venice setting, it could be stunning and the chills could be more effective.

The Professor’s battles with the Devil are largely cerebral and involve Milton’s words from which the Professor can inexplicably gather clue as to his daughter’s whereabouts (some of my mature UK readers might remember the TV show “3-2-1” and this certainly comes to mind here!).

Characterwise, it was one of the supporting characters who attracted my attention rather than the Professor.  Elaine O’Brien, his colleague who is suffering from terminal cancer seems a more rounded character and I wanted to read more about her.  Also, and perhaps, importantly, given the nature of the book, I couldn’t believe in the father/daughter relationship which is so central to the plot.  It didn’t scare me and I didn’t think it was particularly thrilling but it did pass the time well so wasn’t a complete disaster.  I haven’t written Canadian author Pyper off.  His novel “The Damned” was published in the UK in March 2015 and the Daily Mail reviewer certainly liked it – but this for me is one clear case where the promise didn’t deliver.

The Demonologist was published by Orion (who certainly did a good job in the marketing) in 2013.

(I feel better for that- I’ve been suffering from reviewer’s guilt because I never posted that original review!)