I’d like to introduce to you a Greatest Hits compilation from one of the most under-rated groups of the 1960’s – The Exciters.  In the USA they are lumped together with acts both sublime and ridiculous as “One Hit Wonders” with their hit, the girl-group classic “Tell Him” reaching number 4 in early 1963.  In the UK, this track failed to even make the Top 40 in this original version.  Their chart credentials here rest with a number 31 track some 12 years later when the four piece group had slimmed to a duo and met up with British Northern Soul fanatic and would-be record producer Ian Levine and recorded with him a track “tailor-made” for the Northern Soul market and getting a small pop hit in the process.  Chartwise, that is it and yet this CD seems chock-full of potential hit singles ( a couple went on to become hits for artists who covered them) which should have seen this group at the forefront of 60’s Pop – they seem to have been another casualty of the British Invasion which saw charts worldwide dominated by The Beatles et al. Although lengthy chart careers are commonplace today, the Exciters were one of the select acts from the early 60’s who managed chart placings with new material in the mid 70’s

The Exciters of the 60’s were New Yorkers Brenda Reid, her husband Herb Rooney with Carol Johnson and Lillian Walker but Reid’s vocals are the lifeblood of this group.  By the 70’s it was Herb and Brenda (now both known as Rooney) who scored in the UK with “Reaching For The Best”.  There are a generous twenty-nine tracks on this album.  I’m not sure if it is currently available as a CD, but it is as a download and can also be streamed from Spotify.  I have seen versions of it with different running orders.

Opening track, the hit “Tell Him” is a song which has a good story behind it.  It goes (reputedly) like this.  Dusty Springfield, then a member of folk group The Springfields, whilst walking through New York heard this song blasting out of a record shop.  This was a life-changing moment for her as on hearing Brenda’s gutsy vocals she knew that she wanted to be a solo recording artist and perform on tracks like this.  As far as I am aware Dusty never actually recorded a version of this song- although I would imagine it would have appeared on one of her TV shows or in concert.  In the UK the song has been a hit four times, but the original has been the lowest placed of the four, with other versions by Billie Davis (who stole the Exciters thunder by reaching number 10 in 1963), a glam-rock version by 70’s group Hello (#6 in 1974) and “Men Behaving Badly” actresses Caroline Quentin and Leslie Ash (#25 in 1996) but the original is the best.  In fact, the Exciters join the long line of other usually Black American acts whose career plan was thwarted by the cover version – other casualties such as Dionne Warwick, The Drifters and Sam Cooke immediately spring to mind from around the same era.  The Exciters were not just to suffer from this once.  Their track “Do- Wah- Diddy”, an unsuccessful 1964 single written by Jeff Barry and Ellie Greenwich got another “Diddy” added and became the first UK number 1 on both sides of the Atlantic for British group Manfred Mann.  The rawness of the Exciters version has always appealed to me more.  In an attempt to perhaps get their own back in 1965.  They recorded a song which they call “There They Go”, a slightly differently structured song with different lyrics of “Here Comes The Night” which had been a small UK hit for Lulu, but was at much the same time covered by the group Them, featuring Van Morrison, who scored a UK #2, US# 24 hit in 1965. 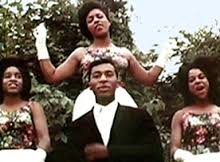 For me it is inexplicable that the follow-up single to “Tell Him” did not chart.  “He’s Got The Power”, another Ellie Greenwich composition (this time with Tony Powers) is another great track, driven by Brenda’s hugely energetic vocal performance, with everything being thrown into it, unpolished and quite brilliant, with a feel more of the Coasters than the more sophisticated girl group sound around in the early 60’s.  “Get Him” is a deliberate attempt to get people remembering “Tell Him” and yet very much exists as its own song with lovely string bursts which is reminiscent of Drifters tracks such as “Please Stay” but at a much faster tempo.

The tempo of a number of these tracks is what appealed to the UK Northern Soul Scene from the late 60’s onwards who took a number of Exciters tracks to their hearts.  The most celebrated of these is “Blowing Up My Mind” which Kev Roberts rated at number 167 in his publication “Northern Soul Top 500” (Goldmine 2000).  This is a track which first appeared on their 1969 RCA album “Caviar and Chitlins”and has a great opening line;

“Dynamite and Nitro-Glycerine is like a firecracker compared to you.”

This man Brenda is singing about here is one explosive guy! By this time there was a move away from girl group concerns and it is actually quite a funky track with drums and organ very much to the fore.  This however, is not their highest ranked track on this Top 500.  At 121 there is the choice that the author would have known would have been controversial, their biggest British hit “Reaching For The Best”.  Controversial, because in a scene that was scouring around for neglected and forgotten tracks from the mid to late 60’s this one was tailor-made in an attempt to make Northern Soul fans thinking they were dancing to some rediscovered track. 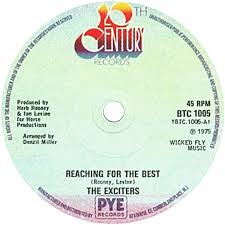 The man behind this was Ian Levine, one of the unsung heroes of British Music, whose unconventional strategies has upset many and  likewise endeared him to many It was 1974 and The Exciters, now down to the duo, were looking for a record deal.  Levine got them to record this track,written and produced alongside Herb, the title of which he had heard being touted by a rival producer for a song that did not yet exist.  Levine got his version out there and it gave the duo their biggest British hit.  I bought this when it came out as a single and it was probably one of the fastest songs I had heard, as it rattles along at a fair old pace.  It is stopped by being an all-time classic by being just a little bit too repetitive towards the end, just another verse would have really done the business I have always thought.

This was Levine’s first foray into the recording industry and began a long association with dance music.  He continued to irritate Northern Soul purists by charting with more tailor made tracks by Evelyn Thomas and L J Johnson, famously DJ’d at Blackpool Mecca Ballroom and later became first resient DJ of London’s top gay night club Heaven, where he promoted High Energy dance music and scored a massive worldwide hit with a track called “High Energy” by Evelyn Thomas once again.  Over the years he has written and produced hundreds of tracks for artists such as Take That, Bad Boys Inc, Miquel Brown (Sinitta’s mum), Barbara Pennington and at one time brought over a whole fleet of ex-Motown artists and began recording with them.  I’m not sure that this venture made any money for anyone and many of these artists had already felt exploited by their first foray into the music business.  There was chart success for Frances Nero with “Footsteps Following Me” (UK#17 in 1991).  I’m a great supporter of Levine’s work and certainly his work-ethic…but back to his first productions, The Exciters.  Kev Roberts in his afore-mentioned book believes that the group had the potential in the mid-70’s to have had a more prolonged attack on the charts but were held back by what he describes as the “volatile” relationship which now existed between Brenda and Herb, leading to the breakdown of their marriage in the 80’s.

But, despite Herb’s presence it is the girl group sound which is executed so brilliantly.  How can anyone not warm to a track called “Run Mascara”, a perkily paced track yet still filled with teenage angst to rival the best of the Shangri-Las and the Ronettes.  “It’s So Exciting” sees the group matching their name beautifully with with Brenda dealing with the prospect of a date with thrilling enthusiasm;

You’ll only order one hot dog for two but oh,

All carried out with an almost operatic feel, yet with honking saxes and the exuberance of youth.  Also, on the way there is a cover of the Jarmels hit “A Little Bit Of Soap” of five years before, which was a minor hit for the Exciters when released as a single in 1966 (a song best known in the UK by the 1978 Top 5 hit for Showaddywaddy).  There’s the lovely Ruby and the Romantics-esque “It’s Love That Really Counts”.  On the slower tracks Brenda’s voice can resemble Sandie Shaw and that’s no bad thing.  With twenty-nine tracks to choose from there is a whole wealth of tracks begging to be rediscovered making this an excellent value for money choice.  There may not be a better example of early-mid 60’s pop soul.

“Tell Him- The Best Of The Exciters” is currently available from Amazon in the UK to download for £5.49.  There is a twenty track version available on CD at the “collectable” price of £31.09.  In the US only a 12 track version seems to be available for $28.16 or a $11.49 download.  The full twenty-nine tracks are available to stream from Spotify.