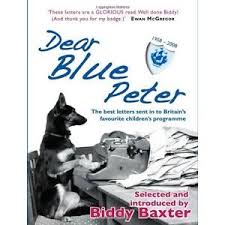 This was a great idea for a book.  To tie in with children’s TV show “Blue Peter’s” 50th anniversary Short Books published a selection of viewers letters from over the years, selected and introduced by legendary producer Biddy Baxter with proceeds going to the John Hosier Music Fund for impoverished young musicians.

Practically everyone who has grown up in Britain during the last 50 years    ( 57 as of 2015) will have their own special memories of Blue Peter and this book is marvelous at recreating them.  For me it succeeds on many levels, as a blast of nostalgia, as a record of the time and as great examples of  letters inspired by the blast of impetus resulting from watching some item on the programme.

In her introduction Biddy Baxter sets the scene on what most have been a phenomenal amount of work and one which explains the relationship this programme has with its viewers.  She writes than when she was a child she penned a letter to Enid Blyton and was thrilled by getting a response.  So much so, that she wrote another one and got another one back- only this one was identical to the first. “She doesn’t remember me,” I sobbed as I ran to my mother. From the very beginnings of Blue Peter Biddy was determined that this should not happen to her viewers and set up a Correspondence Unit and an intricate card index and stored the letters so that each correspondent could feel that they were having their own dialogue with the programme.  Badges were awarded for the best letters- these badges became coveted items.  By the late 80’s the programme was receiving an average of 7,000 letters a week and this selection spans the years.

Some patterns emerge- the children’s love for the presenters and heartbreak when any change is introduced, the complaining of adults who hark back to the golden days of “Blue Peter” (usually when Val, John & Pete were the presenters), the enthusiasm of the children for the “makes” and for collecting for the famous Blue Peter appeals.  These letters are heart-warming and often laugh out loud funny.  Biddy doesn’t try to hide criticisms.  Over the last 50 years the programme has had to deal with a fair number of “scandals” and these are mentioned.  It really is delightfully nostalgic and as a Blue Peter viewer myself for quite a number of these years it was amazing how clearly I remembered something being referred to in one of the letters.  I read it quickly and with much enjoyment.  I’m delighted that these letters were kept- as they are more of a record of the programme and its times than the “time capsules” that were planted in the Blue Peter garden a couple of times over the decades so people in the future would know all about us.  You also cannot help but be amazed by Biddy Baxter’s work ethic as letters were answered by her personally to become treasured possessions for the recipients.

The section that made me laugh out loud the most was about or written to the Presenters.  Here is just a small selection;

I liked it when you tried to ride a killer whale.  I would like to see you try to skin dive and kill a shark.  I have liked everything that Blue Peter had done especially that fort that Val made from lollypop sticks.

Having watched Blue Peter on Monday night and observed Peter’s attempts at making pancakes, I would be most grateful if you would in future keep him far away from a cooking stove.  His travesty of trying to make pancakes was a disgrace and has set my daughter’s cooking back at least six months.

1987- From a grandmother watching Caron Keating with her grandchildren;

“….Also, I don’t wish to appear a miserable old lady, but my darlings and I cannot understand the Irish girl on Blue Peter and therefore we miss quite a lot of dialogue.  Is there any chance of replacing her with an English girl who speaks the same as we do.  I’m sure you could easily fix her up in an Irish programme.  I would certainly not like do to her out of a job.

We look forward to hearing from you.

And to finish a lovely letter and its follow-up from Philip Danielson of Huddersfield.  Those of my generation will remember Valerie Singleton leaving the programme with her replacement Leslie Judd initially presenting alongside her.  This clearly sums up the suspicion of youth and the belief in the power that their letter-writing should give them!

What’s the big idea.  Whats matter with Val why was she not on the programme on Monday 5th of June and that Leslie was and you never said eny thing about it.  I think I know your little game nothing is the same without Val there will be nobody to make good things.

Well I no what your going to do your going to get rid of Val arnt you well if you do you have lost a high grade in children’s television.

PS: Leslie must not here about the letter

And then a couple of days later

I am sorry about the mean things I said about leslie you see I dident now that Val had gone of on a holiday whiteh the camera team because just after I posted that rude letter I rembered that I had not seen the last two programs and my friends told me.  So please forget the letter with the mean things in I am very sorry for what I said please don’t say anything on the programme don’t even mention my name.  I am realy one of your great fans.  But I was angry because thort val was going off.

For countless gems like these, this book is a great read!  I never had a Blue Peter badge – how about you?  What are your childhood memories of Blue Peter ?  Maybe someone’s written a letter about it……….I’ll let you know.

Dear Blue Peter was published in 2008 by Short Books