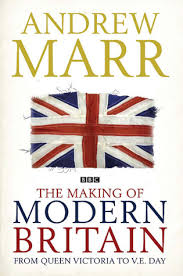 After the great success of Marr’s 2007 publication “A History Of Modern Britain” (my third favourite book when I read it in  2009) and its accompanying TV series, Marr decided to go with a prequel of sorts as this book tells the story of Britain from 1900 with Victoria still on the throne until the end of World War II.  Another TV series was made, but this is, as Marr points out, not the book of the TV series but very much a history in its own right.

It was a great period of change from the “imperial island, with essentially aristocratic values” to the victorious, but almost broken nation of VE Day,  but Marr guides us through, providing a history largely taken from the stories of individuals concerned who provide the starting points for Marr’s retelling of events.  This makes his work very readable.  The interest level is also kept up by his tendency to jump from one subject to another, but for me, this style of writing does have the effect of not having things stick in my mind as much as I hoped they would.

Given the scale of the time-span this can be little more than a general reader and Marr has whetted my appetite to find out more.  I’m nitpicking here but a bibliography would have been very useful, although some of the important references can be gleaned from the notes.  If there is a main character in this piece of non-fiction then that is surely Winston Churchill, whose influence comes and goes until he is elected the wartime Prime Minister and becomes lauded as the man who led the nation to victory.  He comes across here as more fascinating than I was expecting, with a lot of career ups and downs and I’m keen to read more.  The other “characters” who stuck in my head, played just a minor role, and these were the Mitford sisters, whose different obsessions could also be seen as a symbol of the troubled times in the between the war years.  Luckily, I have an unread copy of Mary S Lovell’s biography of the Mitfords on my shelves so have an opportunity to find out more.

This is another very good work from Marr.  If I’m not as enthusiastic it might be because I have now got used to his style which seemed so refreshing in the previous book, but he’s certainly given me a lot to ponder on.