Who on earth watches Channel 4’s annual injury-fest “The Jump”? Well, guilty confession time – I do and I have watched every episode of all three series and I have no idea why. Do I have some kind of sadistic pleasure watching minor celebrities picking up minor injuries taking part in a range of winter sports that are often over in a flash or just not that exciting anyway with what appears to be from what we are shown a minimum amount of preparation?

It seems madness that the climax of the programme builds up to a ski-jump (or air-jump) a “blink and you miss it performance” that has to be built up and replayed ad nauseam to make it more exciting in perhaps the most drawn out television since ITV’s “Splash!”, the Tom Daley diving show which even with celebrities in swim-wear had viewers deserting in droves. But still I watch it. I’ve seen Sir Steve Redgrave get badly injured in Series 1, experienced the shock of Ola Jordan’s serious back injury before the televised transmissions even began in Series 2 and watched Olympic swimmer Rebecca Adlington dislocate her shoulder live on TV on Sunday – none of that is enjoyable, is it? At least it’s a great leveller, the last series saw Joey Essex win against a set of some quite serious sporting talent despite not really ever having a clue what was going on. The first series saw last-minute replacement Joe McElderry victorious probably because he was the least battered and bruised by the end of the show. What must be the insurance premiums for this- and why does anyone participate? (I think I know the answer to that one – m***y).

Series 2 and Series 1 winners – only the strong survive!

The celebrities tend to fall into three groups – those who have been ski-ing virtually since birth, the “Made In Chelsea” brigade and the Socialites – think Tamara Beckwith and some posh bloke in this series and Lady Victoria Hervey in the past; the sporty ones who are quick learners and possess the right mentality (Linford Christie, Beth Twiddle, Becky Adlington) and our favourites the have-a-go’s whose reality TV options have become limited (James Argent, Sid Owen, Sarah Harding). These tend to have done the rounds of this kind of show and/or come from “The Only Way Is Essex” which at least for them, means they don’t have to spend the winter doing personal appearances around the country in some god awful night-clubs. This year’s surprise contestant is Dean Cain, who at 49 should know better and who once was the most handsome man on TV in the “New Adventures Of Superman”.

But God bless presenter Davina McCall! She does a valiant job in trying to keep us to think it’s all more exciting than it really is. Risk career-threatening injuries for a Cow-bell! Really?! The whole thing is portrayed as a steamy knees up, with lots of celebrity whooping and nodding, an oompah band to really liven things up and a local mayor having a few minutes of international fame. This is because most of the action has taken place before-hand. Think “Jeux Sans Frontieres” without…………..well, everything really.

But still I tune in. It was The Skeleton this week, which is we were told “a sport for the mentally composed” with pairs of celebrities battling against one another in timed races in repeatedly crashing themselves against walls of ice and ending up completely disorientated by the ordeal if they were lucky to hold on for long enough. We were promised squashed organs and 5G forces (only 1G less than fighter pilots experience). This was the event where in Series 1 Henry Conway (no I don’t remember either) “smashed his wrist to pieces”. The losers got to perform on the Air Jump (which should have been live but weather conditions, at night, up a mountain, prohibited it). So we watched a recording of Rebecca’s earlier dislocation and agonies on a stretcher. Still she’s an Olympian, so she’ll be back next week surely- but will I? Very probably, yes but with ample use of the fast forward button I’ve worked out there will be time to put the kettle on and get the Hob-Nobs out before “War And Peace” starts. 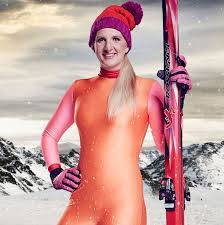 STOP PRESS : Today new injury announced!  Casualty Star Tina Hobley has withdrawn and made her own trip to casualty because of a dislocated elbow which occurred in practice.

The Jump is broadcast on Sundays on Channel 4 at 7.30 pm.  This first episode is available on the All Four catch up service.