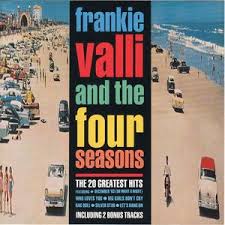 As one of the all-time greats singles acts I would consider a greatest hits compilation by the Four Seasons an essential part of a CD collection. I have chosen this twenty tracker, which released at a time when both vinyl and CD were being released oddly contains 22 tracks (two are bonus tracks probably not on the vinyl version). In fact, this was the first CD I ever bought, purchasing it on the same day I was tempted by a little Goodmans Personal CD which when plugged into the hi-fi system really did have a terrific sound. After years of vinyl records getting thinner and thinner and scratching and warping so easily this was something of a revelation.

The history of this group is a fascinating one and I would recommend the Clint Eastwood directed 2014 movie “The Jersey Boys” for a real eye-opener as to what it was like to be a successful group in the 60’s. It’s quite a dark ride and I would imagine a little different in tone from the joyful jukebox musical of the same name that has been packing them into theatres since 2005 (which I haven’t seen, but which is responsible for bringing this group back into the limelight after a few years of languishing in the shadows of nostalgia). And successful the Four Seasons certainly were, the hit single tally is 5 US number 1’s, 15 Top 10 hits and 30 Top 40 hits. In the UK they scored just the one number 1, 8 Top 10 hits and 17 Top 40 hits. Their chart career spanned from 1962-1976. In the UK they pulled off a Top 40 hit in 2007. Their chart history is a complex one, they had different big hits in the UK from the US. Until the mid 70’s from time to time Four Seasons tracks were released with just Frankie’s name, even though the group were on the recording session. This includes one of his biggest “solo” hits – “My Eyes Adored You”. In fact, it wasn’t until the follow-up to that single “Swearin’ To God” that Valli really began to go it alone.  This CD contains six of his “solo” hits. Frankie Valli scored another 2 US number 1’s and 9 Top 40 hits. In the UK his solo tally is 5 Top 40 hits. They scored big hits for 6 different labels – Vee-Jay, Philips, Smash,Warner Brothers , Private Stock and RSO.

The tracks on this CD are ordered largely randomly so I’m going to be slightly random in my appreciation. There are three main stages of the career- the 60’s hits, the Frankie Valli releases and the 70’s hits. I’m not sure which of these three phases I prefer –they all have more than the odd moment of greatness. In these days a fourteen year career is much less of a rarity but each time there was more than a couple of years between tracks this group were heralded as very much the “come-back kings”, as if they’d been written off as hit-makers in the meantime. This seemed to happen to them time and time again –but when they found the right songs the hits kept coming.

The guys’ breakthrough into the recording industry came when they were named The Four Lovers and did background work as session singers for artists who had made inroads into the pop charts including Danny & The Juniors and Bobby Darin. In the second half of the 50’s they released a string of singles with only one, from 1956 “You’re The Apple Of My Eye” making any impression on the US Top 100 (#62). It wasn’t until the boys began working with Bob Crewe and put out their first Vee-Jay single accredited to the Four Seasons that major chart success came their way. The song written by band member and song-writer extraordinaire Bob Gaudio was claimed as an overnight success, even though the boys had been slogging away for some years. “Sherry”(US#1,UK#8) served as a brilliant introduction to the extraordinary Valli voice, a three and a half octave range with a falsetto which can reach to the stratosphere and that plaintive tone which some have unfairly described as a “whine” which can be used to such great effect.

The early singles are perfect examples of pre-Beatles era pop- “Big Girls Don’t Cry” (US#1,UK#13), “Rag Doll” (US#1,UK#2), the stomping “Walk Like A Man” (US#1,UK#12) are works of three minute genius. The song-writing team of Four Season Bob Gaudio and producer Bob Crewe should be spoken with the same reverence as Goffin & King and Leiber and Stoller. Over the whole of the Four Seasons career they came up time and time again with a thrilling range of songs. Both Crewe and Gaudio collaborated with other song-writers over the years (Sandy Linzer, Denny Randell, Judy Parker Peggy Farina, Kenny Nolan).

There’s a slew of songs that the Four Seasons first recorded that went on to be UK number 1’s for other artists – “Silence Is Golden” (Tremeloes), “The Sun Ain’t Gonna Shine Anymore” (Walker Brothers), Bye Bye Baby (Bay City Rollers), “Walking My Way Back To You” (Detroit Spinners). Other highspots of these early hit-making years include perhaps the mighty and really quite complex “Opus 17” (US#13,UK#20) (a Randell/Linzer track reminiscent of another of their hits penned for girl group The Toys “A Lover’s Concerto”, the hook laden “Dawn (Go Away)” (US#3), the urgent singalong of “The Proud One” (better known as a hit for The Osmonds, but this superior original is presented as one of the two bonus tracks). Then of course there’s the song that just won’t die, not a huge hit when first recorded (US#16) “Beggin’” which puts the plaintive qualities of Valli’s voice to the fore has been reworked in recent years by other artists (Madcon) and also gave the original hit-makers that 2007 UK Top 40 hit forty years after its first release. When they moved away from the Gaudio/Crewe songbook perhaps the results could be a bit more unpredictable, but one of their hits, their version of Cole Porter’s “I’ve Got You Under My Skin” (US#9,UK#12) could very well be the best take on that much-recorded number.

The tracks accredited to Valli as a solo artist include the Motown-esque “I’m Ready Now” (UK#11) (which to me has a slightly sinister edge with more than a hint of “grooming” about it), the under-rated “Swearin’ To God” (US#6,UK#31) with vocal assistance from Patti Austin and “Fallen Angel” (US#36,UK#11) and his two US number 1’s. “My Eyes Adored You” (US#1,UK#58) must have been a track I listened to a lot at a formative age as it is one of the few songs that I know all the words to, a fact which surprises me because it veers close towards the line of cheesiness making it a true guilty-pleasure. The Bee Gees penned “Grease” (US#1,UK#3) is what it is, a title song by the hottest writers of the time tacked onto the beginning of a film to further the link between John Travolta and the Brothers Gibb established to wild acclaim with “Saturday Night Fever”. It’s not a great song (what does it mean “Grease is the word?”) but it tapped into the public enthusiasm of the time and gave him a much appreciated US chart-topper. Perhaps Valli’s best solo moment was with a song that many think is an old standard rather than a Gaudio/Crewe original penned for him in 1967. “Can’t Take My Eyes Off You” (US#2) has that perfect combination of smoochy ballad then bang into that big band section which gets you every time. This song has also done big business for artists as diverse as Andy Williams (who got the UK hit#5 in 1968), Boys Town Gang (UK#4 in 1982) and the Pet Shop Boys (UK#4 in 1991) who with their bizarre sense of genius paired it with U2’s “Where The Streets Have No Name”. 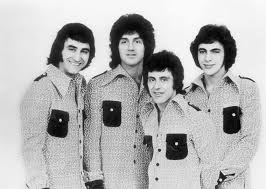 I have a huge affection for the band’s hit output of the 1970’s written by Bob Crewe and the lady he married Judy Parker. “Who Loves You” (US#3,UK#6) might have felt at a time a gimmicky track put out to cash-in on TV’s Kojak’s catchphrase but it has certainly stood the test of time and is a tour-de-force of a track. “Silver Star” (US#38,UK#3) puts Frankie into the background and is another phenomenal production. For me this track should be up there with “Hotel California” “I’m Not In Love” and “Bohemian Rhapsody” as great examples of the 70’s song but although it was amongst their biggest hits in the UK their homeland did not really warm to it, perhaps it was a little too far removed from the Four Seasons sound they loved. This could not be said of the track which brought them back to the top of the charts and gave them their only UK chart-topper in 1976. “December 63 (Oh What A Night!) (US#1,UK#1) was really a perfect song for the band. It managed to feel both relevant and nostalgic and is perhaps one of the greatest loss of virginity songs (I’m rating it significantly above Bobby Goldsboro’s melodramatic and disturbingly tacky “Summer (The First Time)”). It has just the right balance of nostalgic joy and male concern (“as I recall it ended much too soon”) If this is the track that this band are remembered for, coming 14 years after their first hit then so be it.

With only 22 tracks there is going to be so much missing and the track which I feel the absence of on this compilation is their UK only hit “The Night” (UK#7 in 1975). In the early 70’s the band signed to Motown with fairly disastrous commercial results. Berry Gordy put them on his subsidiary Mo-West label which was set up to branch out with more rock orientated act when the band, with their brand of blue-eyed soul could have been very much at home on the main Motown label. Mo-West wasn’t such a great priority and the albums recorded for them (although history has seen them critically well-received) did not sell. “The Night” however found its way to the UK charts via the Northern Soul clubs who pounced on its rarity and forced a commercial release. This is a superb track and is available on other compilations.

Perhaps the Four Seasons are unusual a band in that we do not really need to delve too deeply into their studio albums. For the early part of their career albums were just a couple of singles padded out with other tracks which were hardly essential. The only album that wasn’t a hits compilation that charted during this time in the UK was the debut “Sherry” (#20 in 1963) and that has versions of tracks such “Yessir That’s My Baby” and “Can’t Give You Anything But My Love” which would have appealed more to the parents of the early fans. Their 1976 album “Who Loves You” charted but the best tracks are available on this and other compilations. The Motown albums might be worth considering and 1977’s “Helicon” as they are not chock-full of hit singles which you should already have. They even tried a “concept” album in 1969 “The Genuine Imitation Life Gazette” containing tracks such as “American Crucifixion” which sounds such a distance away from “Big Girls Don’t Cry” that I’ve never been tempted to experience it.

This compilation (Telstar 2320), which was known as “The Collection” is a perfect illustration of one of the great American vocal groups and the unique voice of its lead singer.

“The Greatest Hits” is currently available from Amazon in the UK for the bizarre price of £48.95 used from £6.98.  It does not seem to be readily available in the US. In both markets other Greatest Hits compilations are available.