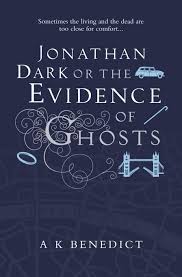 This is the second novel from AK Benedict following 2013’s “The Beauty Of Murder”.  I haven’t read that but will certainly be seeking it out after reading this.  As suggested by the alternative titles this is a book with its foot in two camps.  Part crime novel involving a murder and a stalking and part ghost story, it manages to be very effective on both counts.

Central to the plot is the fascinating Maria, blind since birth, but whose sight has been restored.  Maria cannot cope with being plunged into the sighted world and shuts it out with a blindfold.  She is a mudlarker, collecting treasures on the foreshores of the Thames and uncovers a grisly marriage proposal which leads the police to make connections with an earlier murder and assume that Maria is in danger.  If you can buy into this and not read the book yelling at her to take the blindfold off so she can see the danger then there is so much to enjoy.

Investigating officer Jonathan Dark, homeless because of a crumbling marriage, has his own secrets, some of which he has repressed since childhood.  His involvement in this case reawakens these secrets.  As Maria’s vision is limited through the blindfold so is the vision of most other Londoners who cannot see the ghosts of the departed moving around the city streets.  The few that can see become vital to the solution of the case.  There’s also a group of influentials who are using murder as an entree into an elite group, “The Ring” who infiltrate Dark’s investigation.  I found the whole thing quite fascinating.  It works well on a number of layers and I think would appeal very much to those adults who grew up with Harry Potter and are still searching for adult reading with the perfect blend of fantasy and reality and there are a good few million of those out there.  Swap the school story and the magic for the adult world of crime and a ghost story and you have a book that has the potential to be a real crowd-pleaser.

I loved the ideas of ghosts being ferried around in the back of taxi cabs, some drifting shapelessly within “The Gloaming” and some taking stronger identities to sort out unfinished business and I loved how Benedict blends this into a modern day police investigation.  I loved the connection between the secret keeping police officer and the girl who has needlessly closed her world around her and who has no secrets because her stalker observes everything.  It was tense and chilling both as a crime novel and ghost story.  The presence of London, even when through a blindfold, was palpable and I was kept totally involved as I couldn’t work out the ending.

This is a cracking example of a crime writer attempting to do something different and a fantasy writer using the crime genre to attract a more general readership.  It is solid on both counts. Highly enjoyable and if it just misses out on being one of my rare five star reads it’s because of the niggling “Why doesn’t Marie just……?” questions which would remove some of the peril she is plunged into.  This for me is nitpicking but I feel it might overly frustrate some readers.  It’s quirky and different and yet given the right push still has the potential to snowball into a big seller.

Jonathan Dark Or The Evidence Of Ghosts is published by Orion on February 25th.  Many thanks to the publisher and Netgalley for the advance copy.