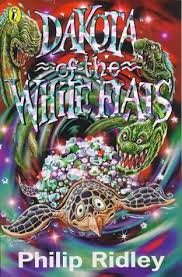 Philip Ridley is responsible for one of my all-time favourite children’s novels “Krindlekrax” (1991).  It is a book which reads aloud perfectly and was always a huge hit from my Primary School teaching days and was, I know, for a number of children I taught the book which turned them on to reading.

I have read another four of Ridley’s children’s books- “Mercedes Ice” (1989), “Meteorite Spoon” (1994), “Kasper In The Glitter” (1995) and “Scribbleboy” (1997) but only in “Kasper..” does the magic come close to Krindlekrax.  Ridley does not seem to have published any children’s novels since 2005 so I thought I’d go back and read one of his earlier novels I hadn’t experienced before.  “Dakota Of The White Flats” was republished with new illustrations by Chris Ridell by Viking and Puffin in 1995 but actually pre-dates “Krindlekrax” as it first saw light of day published by Collins in 1989 when it obviously did not set the world of children’s books alight.  I was glad to find out that it was earlier than “Krindlekrax” because you can see some of the elements which came together to make that book so marvellous here in a formative shape.

The plot is not quite as rich but some of the characters have the little identifying quirks which made them so memorable in “Krindlekrax”.  Ten year old Dakota Pink is no Ruskin Splinter but there is depth to her and a surprisingly prickly edge.  There’s a passive aggressiveness in her relationship with best friend Treacle that parents might want to highlight.  She looks after her Mum, permanently cocooned in her armchair since the failure of her marriage by cooking her dumplings and looks after the lodger (the most “Krindlekrax-ish character of the lot – Henry Twigg, with his “clicketty-clackitty-click-clock shoes”) by clearing the silverfish out of the bathroom.  The children become fascinated by the secret in mad-woman neighbour Medusa’s (think Absolutely Fabulous’ Patsy combined with Cruella De Vil) cabbage-strewn pram.

For me there are not the layers of depth of “Krindlekrax” with its themes of bullying, old age and death, loneliness, self-esteem and heroism although these children have their own quest.  It doesn’t have that same resonance of the traditional fairy-tale and myth nor the magical way that sound effects are used to build the story.  I did, however, very much enjoy the spirited Dakota’s challenge and the sense of accepted craziness which thinks nothing of a mother fed only on dumplings and an unresolved piece of magical transformation.  I still have a number of Ridley’s children’s books to read and I’m still hopeful of finding one to rival “Krindlekrax”.  “Mighty Fizz Chilla” (2002) which was shortlisted for the Blue Peter Book Awards sounds as if it has potential.  And then I have his adult work to consider.  There are three novels, the screenplay for the 1990 British film classic “The Krays” to his latest film work, as writer and director for 2010 British horror “Heartless”.  There’s a number of highly-acclaimed plays (available in two volumes from Methuen) for adults and also some for children.  Should I wish there’s also poetry , opera, photography, rock music and art to explore.  This man is a real all-rounder and an under-rated British talent.