I concluded my recent tribute  to writer Tony Warren who passed away in early March by hoping that this 2010 drama first shown on BBC4 would be repeated.  This week it made an appearance on ITV3 and it was good to see it again.  It tells the story of how twenty-three year old Warren under contract as a writer at Granada television came up with perhaps the most important television programme in British history.  I think this was first made as part of the celebrations for 50 years of Coronation Street, but it did provide a very fitting tribute to the man behind it.

Granada Studios set up in Manchester with the remit to make programmes in the North of England and to support Northern writers.  Warren (ably played by David Dawson) announces his arrival with “I’m a writer, I’m Northern and I’m ready to be nurtured.”  This leads to him writing scripts for series such as “Biggles” which is not really what he had to mind.  What he has in mind (which came to him after he barricaded himself in his superior’s office by refusing to come down off the top of the  filing cabinet) was a tale set around Manchester, “the story of a back street terrace and all the people who live in it.” 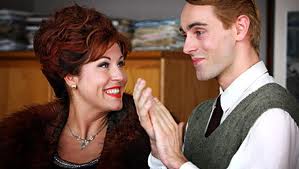 Jessie Wallace and David Dawson as Pat and Tony

The green light was not immediate.  There were reservations about this young writer, about using Northern actors in a drama, “North Country accents- it’s the language of comedy” and certainly the name of the piece (originally Florizel Street- cue the much quoted story of the cleaner who said it sounded like a disinfectant) but eventually casting began and a pilot episode was commissioned.  The most fascinating aspect of the programme was the casting, both in terms of the original “Coronation Street” cast and who was chosen to play them.  Warren was keen to use Doris Speed who he had worked with on radio.  Doris had more or less given up acting but came on board to play Annie Walker.  Celia Imrie played Doris with just the right level of haughtiness.  Ena Sharples was originally played by Nita Valery in the pilot but she didn’t have enough edge and it seemed as if no-one would be able to play the character to the team’s satisfaction.  Warren remembered another performer who had terrorised him as a child – Violet Carson.  It was made clear that she was going to be difficult but was perfect for the role of the harridan with a heart.  Lynda Baron played her beautifully. Most inspired of all was East End Soap Queen Jessie Wallace (Kat Slater) as Weatherfield Soap Queen Pat Phoenix.  This was a pitch perfect performance of the woman who was central to the show’s early success and became a great friend of Tony Warren.  These were performers who had struggled – Pat’s professional career had become a round of auditions where she was told to “Come in, flash your tits, piss off-it’s no life.”  Tony Warren’s creation certainly gave the actors life. 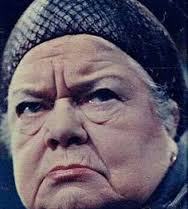 William Roache was played as a go-ahead young actor who was roughing it for a while until his big break in films came alone:  “It’s only a week.  What harm can it do?”  This said by the man still a mainstay of “Coronation Street” fifty-seven years later.  His part was played by his son, James, so this portrayal must have Roache’s approval.  For me it ended too soon with the transmission of the first episode.  I would like to have known how the instant stardom after years of struggling affected the cast and , indeed, Tony himself.  With only a 75 minute running time  for “The Road To Coronation Street” events were obviously condensed.  It chose to focus on just a handful of the performers- yet a number of the other original cast were fascinating – Jack Howarth who played Albert Tatlock, Margot Bryant who played Minnie Caldwell could have a ninety minute docu-drama all to herself as far as I am concerned but these were barely visible here.   Philip Lowrie who played Dennis Tanner from the first episode has said that Warren wrote that part for himself and subsequently found it hard to write for Lowrie but this was not touched upon here other than him reading the part in Pat Phoenix’s mesmerising audition.

“The Road To Coronation Street” was written by a man with a pedigree, Daran Little.  Script writer and for many years a historian for the street this is a man who knows his stuff well and was a perfect choice to script it.  He is also a great friend of cast members and I have read a number of books he has written which has chronicled the life of the street over the years.  He also co-wrote Betty Driver’s autobiography.  It was directed by Charles Sturridge who also worked on “Coronation Street” so it was  obvious that these people knew what they were doing.  In 2011 it won the BAFTA for Best Single TV Drama and both Jessie Wallace and Lynda Baron were nominated for Best Supporting Actress. 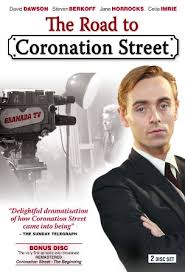 It was great to see this again both as a tribute and as an example of a piece which is superbly written, acted and with a real feel for the period.  ITV3 does tend to show things over and over again so keep a look out for it.  Now all we need is to get Warren’s novels republished.

The Road To Coronation Street was shown on Monday 14th March at 10pm on ITV3.  It is currently available on catch-up on the ITV hub. It is also available on DVD.