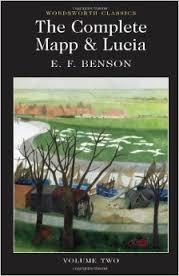 Yesterday a friend and regular commenter on this blog site sent me some pictures she had taken of Rye in East Sussex.  This charming little town has been on my mind recently because of the recently published book by Helen Simonson “The Summer Before The War” and EF Benson who both lived and set his most famous novels there.  It was lovely to see the pictures and it got me thinking once again about Benson and his Mapp and Lucia stories- so it was time to dig out the second volume of the Wordsworth Classics Editions which contains, at a bargain price, the remaining three novels of the series “Mapp and Lucia”, “Lucia’s Progress” and “Trouble For Lucia”.

After the first three novels Benson must have tired of his creations for a while as there was an eight year gap between the publication of “Lucia In London” and the first novel in this volume.  His wizard wheeze in re-activating these stories was to pair up his two formidable creations.  Fans of the television adaptations may very well be surprised that these two only meet up in the fourth novel of the sequence.  Up until this point I had preferred the characters in Lucia’s Riseholme (based on Broadway in Oxfordshire) to Mapp’s Tilling (based in Rye) but Benson obviously did not feel this way as Riseholme is the main setting only for the first novel although it does feature as a secondary location in others including this.

In “Mapp And Lucia” (1935), Lucia and then Georgie decide they need a break from Riseholme and Lucia rents Mapp’s cottage in Tilling.  Lucia has become widowed in the gap between the novels and life at Riseholme has become drab.  Tilling provides her with the opportunity to re-assert herself in a new social circle, one which has hitherto been dominated by Miss Mapp.  Cue much tension between the two.  Most of the time Lucia manages to outwit Mapp as the two plot and plan their way around various social gatherings.  I did find this novel to be a little on the over-long side and the pace dips when compared to “Queen Lucia”.  It is often funny, however, and the last third is extremely memorable as Benson takes the unusual step of having the two heroines swept out to sea during a flood, perched on an upside-down kitchen table.  They are missing and presumed dead for months.  It is a brave move as the readers do not know what has happened to them but get to relish Mapp and Lucia’s friends’ reaction to their demise before they show up again (I’m not plot spoiling- you know there are another two in the series) to bring the book to a satisfactory and memorable conclusion.  This is my third favourite of the series so far (behind “Queen Lucia” and “Lucia In London”).

My fourth favourite out of the first five is “Lucia’s Progress” for which there was obviously a demand as it was also published in 1935.  In this book Lucia makes a fortune on the Stock Exchange inspiring the residents of Tilling to follow her lead.  She manoeuvres the now married Mapp out of her home with the two women swapping houses.  She discovers “Roman artefacts” in her garden.  Georgie has shingles and has to grow a beard.  Mapp is believed to be pregnant and uses this to her advantage.  Lucia becomes a benefactor to all of Tilling and disappointingly, as I feared it would damage his characterisation in the next book gets married to Georgie.  There’s quite a bit of re-jigging in this book as if Benson is getting them into position for the next (and last) in the series.  It isn’t quite as funny and doesn’t sparkle as much as some of the earlier novels.

His 1939 publication “Trouble For Lucia” ends his nineteen year sequence of the six novels and for me eases into fourth place ahead of “Lucia’s Progress” and “Miss Mapp”.  In this Lucia needs to find a mayoress and the female residents of Tilling scramble to apply for the role, the wonderful Olga Braceley returns in a somewhat minor role and Lucia and Georgie revisit Riseholme.  Lucia aspires to befriend a Duchess and for a while all the plotting gets the better of her and she actually manages to squeeze out a couple of tears as things do not go to plan and she begins to lose face.  Georgie’s a bit sidelined and a new character Miss Leg, an author who writes as Rudolph Da Vinci, is introduced without making the impact of some of the much more rounded established characters.  It was quite good to see that the playing of Bridge did not have such a dominant role as this as Benson’s love for the details of the card game has had a tendency to slow things down at times in others in the sequence.

For those who find that these six novels are not enough Guy Fraser-Sampson who has written the recently published and reviewed “Death In Profile” (link) has reactivated the series in novels such as “Au Reservoir” and “Lucia on Holiday” (haven’t read these yet).

E F Benson (1867-1940) was a prolific writer who produced over 60 more novels apart from his “Mapp and Lucia”sequence and numerous collections of short stories are available.  Sitting on my shelf I have a compendium of his horror stories “Night Shivers” as well as a biography of his childhood by Rodney Bolt focusing on his mother “The Impossible Life Of Mary Benson” as well as a non-fiction work “As We Were: A Victorian Peepshow”.  I have noticed that Amazon have a Benson collection in e-book form as part of the Delphi Classics, but I am trying to keep away from that as I have too many of the Delphi Classics series already and probably enough unread Benson on my shelves for the time being. (although I’ve looked just again and its currently £1.49 for 32 novels and many short stories- how long will I be able to resist?).

The Complete Mapp & Lucia Volume 2 was published by Wordsworth in 2011.  Other versions are available.