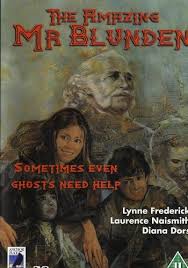 An early morning Easter treat was on BBC2 on Bank Holiday Monday.  This is a film often tucked away in the off-peak schedules at holiday times.  When I first saw it as a child on its cinema release I became quite obsessed by it and have watched it quite a few times since and find myself looking out for it at Christmas and Easter. 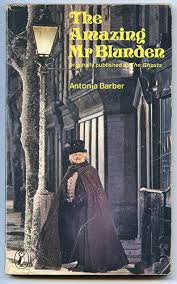 Based on the book “The Ghosts” by Antonia Barber (it was republished with the film’s title on its release- I know this as I had a much thumbed Puffin copy) the screen version was written and directed by Lionel Jefferies whose profile was hot after his much praised appearance as Grandpa in “Chitty Chitty Bang Bang” and who had garnered much critical and popular acclaim with his previous job at directing “The Railway Children” in 1970.  At the time I wasn’t that excited about that film because it came out too soon after a BBCTV serialisation (which also starred Jenny Agutter) that I much enjoyed and I really didn’t see the point of them releasing a film.  In later years I’ve revised my opinion as it is a lovely family movie but I also still have a strong attachment to “Mr Blunden” which on its release I vociferously preferred.

Dating from 1972, it seems earlier, especially in the early sequences set in Camden Town.  The print that appears on television always looks a bit dodgy in this section (would they have been filming on videotape then?).  One evening in 1918 a strangely out of place elderly gentleman turns up at a depressed looking basement flat to offer its occupants the job of a caretaker of a large, deserted house in Langley Park with free accommodation in a nearby cottage.  The offer is taken up by the mother and her three children (baby Benjamin need bother us no more) but Lucy (Lynne Frederick) and James (Gary Miller) will.  There’s heavy hints that this gentleman, a solicitor named Mr Blunden, is a ghost but I can recall that on my first viewing I didn’t pick up on this until quite some way into the film- Oh the naivety of youth! 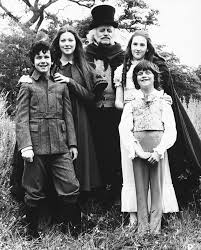 Once on the Langley Park estate we move into time-slip territory when two child ghosts from 1818 make an appearance and enlist the help of Lucy and James to try and change events.  This is what I would have loved as a child- anything to do with moving time fascinated me.  (“Tom’s Midnight Garden”, the truncated time of the Narnia Books.  Anyone remember the ITV series “Timeslip” with a barrier to different eras?  I adored all these).  The youngest boy, Georgie, is heir to a £30,000 fortune and in 1818 people want him out to the way.

There’s familiar faces from the time – Lynne Frederick appeared regularly on television (this was her first film) and went on to marry David Frost and Peter Sellers.  James Villiers made a good living playing cads and Madeline Smith, a regular in everything from “The Two Ronnies” to Hammer horrors plays his child-like bride with aplomb.  There are two scene stealers, however, Deddie Davies as the put-upon cringing skivvy Meakin and an absolute revelation of a performance from ex-glamour puss and British national treasure, Diana Dors playing the hideous, warty and wicked Mrs Wickens.  This was her biggest part in a long time and reminded moviegoers who knew her more as a celebrity and via tabloid headlines that she was a great character actress.  If anything, I think she is underused in this film as she steals every scene she is in.

Watching this again I had a wry smile at the Isle Of Wight being advocated as an ideal honeymoon resort (“Cor, Strewth! The Isle Of Wight!) exclaimed Arabella and anyone wishing to follow up on this could do worse than follow the links to my guesthouse found on the side of this post. 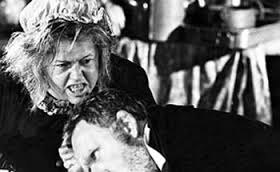 It all ends satisfactorily with a climactic fire scene which is better than the special effects capabilities of 1972 might suggest and I absolutely love the credits.  The fourth wall is broken down and the cast wave to us in turn and thank us for watching.  I adore this and think it should be the compulsory way to end things.  Even the near-perfect “Happy Valley” might have been improved by Sarah Lancashire, James Norton et al smiling and waving at us in the credits!  After watching this film I felt I’d had a real Easter treat and it helped me get over the disappointment of finishing all of my Rolo Chocolate Egg the day before.

The Amazing Mr Blunden was shown on BBC2 on Monday 28th March.  It is available to buy used and new  as a DVD from Amazon.