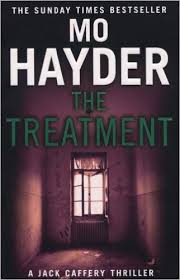 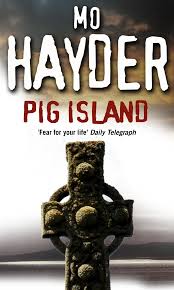 Mo Hayder once ruined my holiday!  I went to the Canary Islands for a week of sun and relaxation and took her debut novel “Birdman” (2000).  I thought it would be a perfect read by the pool on a sun-lounger.  It was not.  The word for it was visceral, and although gripping was so chilling that it gave me nightmares throughout my holiday- and this is one of the few times a book has had this effect on me. I felt a little bit guilty that when I left I placed it on the bookshelves in the lobby of the complex, for other holidaymakers to pick up.  Well, if she ruined my holiday, she could darn well ruin somebody else’s to make up for it!

But then I read her standalone novel “Tokyo” and really enjoyed it and back in 2009 it was my favourite read of the year.  “The Treatment” is the third of her books and like “Birdman” features Detective Inspector Jack Caffery and like “Birdman” I found it very disturbing.   The theme is paedophilia and a case becomes personal for Jack as it plays into his obsession with his brother’s disappearance as a child.  Jack suspects the abduction was carried out by a neighbour who still taunts the detective.  This neighbour was also in “Birdman” and I found this plot-line very disturbing then and it is more satisfactorily resolved in the follow-up but the main case is pretty ghastly.  Hayder is superb at cranking up the tension but it can all become a little too much for this reader.  I wondered how much gender plays a part in this- does she get away with such dark material because she is a woman writer?  Not sure.

Anyway, with “Tokyo” still in mind I abandoned the Caffery series for my next read and went with another stand-alone “Pig Island” which even from the title suggests it’s not going to be a barrel of laughs. In fact I thought it was relentlessly seedy with its tale of Satanism and strong horror story influences, especially in its first half.  Joe Oakes, a journalist, goes to a remote Scottish isle to meet the members of a sect, the Psychogenic Healing Ministeries who have settled there.  Oakes also has a score to settle with the leader who he has had a previous run-in with.  What he finds on the island is a community divided and living in fear of Satanic influences.  Things get progressively worse for Joe, who is not the most likeable of characters and also for his damaged, neurotic wife Lexie and their lives are under threat.  The tension is unceasing and there is no doubt that Hayder is first class at achieving this but sometimes once again things are a little too much and the reader ends up for a bit of light in the shade.  So what was it about “Tokyo” that got me so excited when I read it in 2010? Why did that work so well and stand out from all the other books I read that year?  It’s no good – I’m going to have to re-read to find this out…………..Stay tuned!