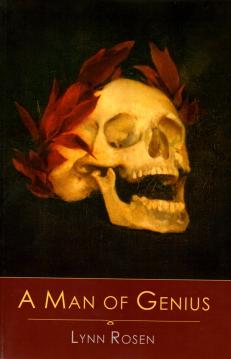 I was approached by the publicity team working on this novel to take a look.  I’m always fascinated by late developers.  Ian McKay, charmed me last year with his debut novel at 76.  Here we have an American octogenarian’s debut.

It seems from the author’s acknowledgements that this has spent many years in the pipeline but has now made its appearance via Una publications and is available in the UK as paperback and e-book via Amazon.

Early reviews have made comparisons to both “Wuthering Heights” and “Rebecca” and I can see where they are coming from, to an extent, particularly in structure.  Basically, Rosen’s book is an old-fashioned murder mystery, that fits in nicely with the Golden Age of Crime Fiction.  It’s a little more than that, however.  There are gothic undertones and a number of quite thorny moral issues are raised.

At a social event a lawyer, Carlyle Richards, approaches her superior with concerns she had over a case involving the estate of a famed architect.  This causes a string of reminiscences from the veteran lawyer Arthur Dolinger who undertakes to fill the gaps.  This is his account.  It is the narrative style that brings to mind “Wuthering Heights” as Dollinger, an unreliable narrator, produces his version of events through what he believes other characters encountered with occasional interjections from himself.  Like that classic novel, you do have to keep reminding yourself who is telling the tale.

“The man of genius” is architect Samuel Grafton-Hall.  “Cunning” might be a more fitting epithet.  With many unfinished projects due to litigation from over-expenditure, a wife who is often the uncredited creative force, a team of hand-picked architects working under his name and a complex love life which involves remote island locations this is a man with a lot of secrets to keep.  It is up to Dollinger putting himself in the position of the junior lawyer, Grafton-Hall’s wives, lovers and the architect himself to unravel things.

It is all quite intriguing.  The architectural theme gives the whole novel a sense of grandeur and the resolution taking place on an island which consists of one large house feels suitably Agatha Christie-like.  I’m sure Lynn Rosen must be delighted to see this labour of love in print and she certainly exhibits enough talent for me to want to read more from her in the future.

The Man of Genius is published in 2016 by Una Publications