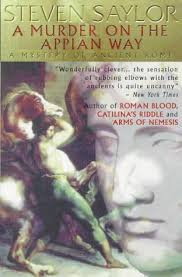 This is the seventh book in the Roma Sub Rosa series (for my reviews of the previous two see here).   Unfortunately, this is the weakest in the series.  It took me until I got to the Author’s Historical Note at the back of the book to appreciate just how much of this story was based upon fact.  Saylor takes as his inspiration a real-life murder, defended by Cicero and seen as one of the factors which led to the Civil War which breaks down the Roman Empire.

The novel is set in 52BC.  Main character Gordanius The Finder is now in his late fifties.  The whole thing kicks off with a riot after Clodius (who we met in “The Venus Throw”) is murdered apparently by his arch-enemy Titus Milo.  Gordanius is asked to find out what happened and alongside son Eco and new slave Davus they go to the scene of the crime, the Appian Way, to question potential witnesses.  There’s a lot of political intrigue amongst Clodius’ followers, Milo, Pompey and Cicero and as a result this novel feels a little stodgy compared to its predecessors and the investigations upon the Appian Way become somewhat dull.

All is not lost, however, as the novel does pick up considerably in the last third with the trial and its after-effects and the characters I have enjoyed reading about so much in the past regain their vivacity.  Perhaps there is just a little too much fact in this novel when a bit more fiction might have spiced things up a little.  There are some new characters who look like they might have significant parts to play in later novels and all this suggests that the slight dip in quality for this instalment might just be a little blip.

A Murder On The Appian Way was published in the UK by Robinson in 2005.  There have been a number of re-issue editions with different covers.