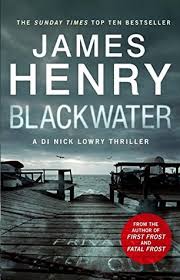 Reading this first in a projected series of police procedural thrillers featuring DI Nick Lowry I kept thinking about what makes a distinctive British crime series.  A lot is to do with location (Dexter’s Oxford, James’ Brighton, Rankin’s Edinburgh immediately springing to mind).  I was interested by Henry’s Colchester, its garrison town status gives it an added dimension which will pitch army against police and the location itself (with which I am not familiar) with its nearby coastal flats and Mersea Island has much dramatic potential.

Secondly, we need an involving set of regular characters.  Sometimes this can take a book or two to get established so I’m not that worried that I feel I don’t have the measure yet of DI Lowry nor his team nor superiors.  The “crime” itself is obviously an essential.  Does it involve the reader throughout?  On this occasion, I’m not totally sure it does.  In the first week of 1983 a soldier falls to his death after being chased, a headless corpse turns up on a causeway and a drugs run goes wrong.  How far these are connected to one another are up to Lowry and his team to work out.

Finally, a little something special is needed, that unique twist to make the series stand out.  By setting it in the 80’s Henry recreates a world of phone boxes rather than text messages and of police officers more interested in arranging boxing and football tournaments than anything else.  And oh yes, the sexism, this is reminiscent of “Ashes To Ashes’” Gene Hunt (a name that may very well be mentioned regularly in reviews of this book).  Consider the Chief Superintendant’s words;

“ The police force is a man’s arena, and as such any woman prepared to play in this world has to be prepared to take a few punches, much like inside the ring….Figuratively of course- we can’t go knocking them around, that would be wrong….But ordinarily, the odd grope, an arse squeeze on a night out, is acceptable.”

Henry’s world of crime solvers is a macho  and often disinterested one but there’s an awareness that times need to change and this is conveyed well.  A woman is in charge of these boors (albeit a fur coat clad one) and her WPC niece is keen to make an impression and you get the feeling that this is where the mileage is for this series.

The author has previously written three well-received prequels to RD Wingfield’s “Frost” novels  but this has more grit and the lingering air of Old Spice about it.  He has created a series which has the potential to do well.

Blackwater was published in July 2016 by Riverrun (a Quercus imprint)