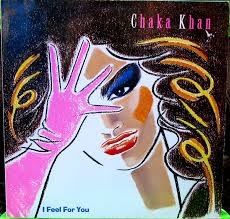 This was Yvette Marie Stevens’ 5th solo album under the name Chaka Khan in a solo career with Warner Brothers which had spanned eight years.  Emerging as the featured vocalist in Rufus, Chaka exploded onto the music scene, like the fireball she is in 1974 with a string of eight US Top 40 hits – the biggest being the debut hit, the Stevie Wonder penned “Tell Me Something Good” in 1974,  This blend of Rock/R&B and Funk didn’t not go down so well in the UK where commercial pop success eluded them.  (It would not be until Chaka was an established solo star herself that Rufus would score with an all-time classic hit).  With tensions in the group by 1978 it wasn’t too much of a gamble for Warner Brothers to launch Chaka as a solo artist and by pairing her up with songwriters and producers Ashford and Simpson produced one of the all-time classic disco tracks on their first attempt.  The gold debut album “Chaka” gave her a solo career high US chart placing (#12).

Six years on and the music world had changed.  1984 was a year when new-ish  UK bands were dominating charts worldwide including Frankie Goes To Hollywood, Wham and Duran Duran.  Many of the female soul/disco artists who were, like Chaka, recording in 1978  were finding success a struggle –something new was needed.  Chaka looked like she might be opting for a more jazz-orientated path after receiving much critical acclaim for her jazz based tracks on her albums and the release of a highly-regarded jazz album for Elektra“Echoes Of An Era” on which she contributed vocally.  Warner Brothers, and especially legendary  Executive Producer Arif Mardin had not finished with Chaka yet.  The title track from this 1984 album put her to the top of the UK charts for three weeks in November –the first time an American female had done so since the last hurrah of Disco of the movie-linked “Fame” by Irene Cara over two years before.

The album “I Feel For You” featured ten tracks and eight producers yet there is a definite unifying feel to the album and it certainly sounded unlike anything Chaka had recorded before.  There was a strong electro hip-hop feel to the whole proceedings, a lot of special effects and big productions that needed a powerhouse vocal like Chaka’s to cut through.  In the US it became Chaka’s only platinum album reaching number 16, going one place better in the UK and becoming a Top 20 album in a number of European territories – including Sweden (#9), Switzerland (#14) and Germany (#17).

The album kicks off  with a superb introductory track for the new Chaka sound and one which became the follow-up to the number 1 single reaching 14 in the UK and topping the US dance charts.  “This Is My Night” is a brash and loud Arif Mardin production but the whole thing works extremely well especially in the middle section where the effects kick in.  It was an excellent choice as it has provided Chaka with a built-in show starter.  When the introduction kicks off the hairs stand up on the back on my neck and Chaka convinces that this really is her night.  The second track was Chaka’s version of a song originally recorded by Carole Bayer Sager and written alongside her then-husband Burt Bacharach with Bruce Roberts.  “Stronger Than Before” is a great empowerment song and is saved from being a fairly standard 80’s power ballad by the more street-wise production by Mardin with Robbie Buchanan.  There’s powerful multi-tracked vocals which Chaka singing effortlessly at the top of her range.  “My Love Is Alive” has an ear-worm of an introduction with Chaka scatting over the top.  The Khan voice is often compared to a saxophone and this is an example where this applies.  This song,  a cover of a song by American artist Gary Wright contains some serious “scratching”, which was still quite a new sound in 1984 and certainly would not be something associated with Chaka Khan.  Anastacia did a good version of this song on her 2000 “Not That Kind” album.

Another gem track next is “Eye To Eye” where production duties are handed over to Russ Titleman and a song written by Don Freeman and three members of the Sembello family (Michael Sembello most famous for “Maniac” from the “Flashdance” soundtrack).  This is a more mid-tempo number and quite a sophisticated song which reminds me of some of the work Quincy Jones did with George Benson.  Less electronic sounding than some of the tracks and with a nifty guitar solo by Sembello, this has a warmth to it which really wins me over every time.  As single number three from the album it reached #16 in the UK in 1985 and did slightly better in Ireland (#12).  The three singles from this album show Chaka at her commercial peak and all three are amongst the best tracks off the album- so Warner Brothers made some good choices. 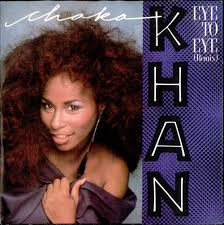 The first side of the old vinyl copy ended with the Marif produced “La Flamme” and some more scratching in the introduction.  Chaka got a  lyric co-writing nod for this and the whole thing hits a pretty potent groove- perhaps slightly reminiscent of the earlier “Papillon” track from the 1980 “Naughty” album with its occasional French lyrics but with a stronger hip-hop feel.  It doesn’t really do anything out of the ordinary and it is unlikely it would be too many people’s favourite track on the album as there are better examples of what this has to offer.

An all-star package was put together for “I Feel For You”- song courtesy of Prince, who became a great friend of Chaka’s and who would work with her on later albums but for this one she’s covering one of the songs off his 1979 second album.  Prince was hot by the time of this release and would have guaranteed Chaka airplay.  Also hot was rapper Melle Mel who provides the signature stamp on the track from the introduction and add to that the harmonica of Stevie Wonder in a sample from his early instrumental hit “Fingertips”. Stevie had that year got one of his biggest ever hits (and first UK number 1 solo single) with the sub-standard “I Just Called To Say I Love You”.  This combination resulted in a track  that just leapt out of the radio.  Melle Mel’s introductory rap in the course of a few seconds changed Chaka’s life forever, with the “Chaka Khan” namecheck which made her a household name and is the thing most associated with her.  It was certainly not love at first listen for Chaka.  She told David Nathan in an interview which is reported in his “Soulful Divas” book;

“I said, “Oh my God!” and I turned to Arif and asked him how he could do that to me! (Now) I just have fun with it when we perform…”

It is the thing that has lasted with the song and helped get it to number 1 in the UK for three weeks and become her biggest US solo single reaching number 3.  It also topped the chart in Ireland and got to number 2 in Canada and New Zealand suggesting this really was a track with world-wide appeal.  There was an affectionate nod in the closing moments of Whitney Houston’s 1993 big hit cover of “I’m Every Woman” when she sneaks in the “Chaka Khan” refrain and including her in the video. 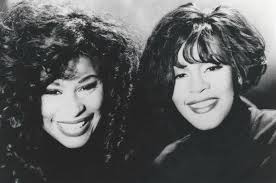 “Hold Her” deceptively in the introduction has us thinking we are going to have a ballad but the beat kicks in for another solid track.  This album does have one more gem in “Through The Wire” a superb song written by David Foster and Tom Keane with lyrics by Cynthia Weil (who with husband Barry Mann were one of the leading lights of the 60’s New York songwriting scene penning such classic tracks as “You’ve Lost That Loving Feeling”, “On Broadway” and “Make Your Own Kind Of Music”.  With production by David Foster and Humberto Garcia there’s a move away from the more heavy-handed production to produce a much gentler touch which really gives Chaka the chance to shine vocally.  It is a great soul ballad and has even survived a risible sampling by Kanye West who sped the track up in true Pinky and Perky/The Chipmunks fashion in his 2004 debut hit single of the same name (US#15, UK#9).  If it introduced only one person to the original track and the work of Chaka Khan then maybe he has done his job.  Closing tracks “Caught In The Act” and “Chinatown” wrap things up without being stand-outs.

Not long after the release of this album I saw Chaka on tour at The Hammersmith Odeon.  She was apparently suffering from laryngitis and had to have a helping hand from backing vocalists for the top end of the range but she turned in a good show.  I’ve seen her a couple of occasions since and she really is an effortless performer – those notes can soar from her without it seeming to have any physical effect.  That’s also where the musical instruments comparisons come in.  This was her commercial and, taken as a whole as an album, her creative peak.  It ensured that by the end of 1984 everyone knew the name “Chaka Khan”.

The video for “I Feel For You” is, how should I say it, very much of its time………