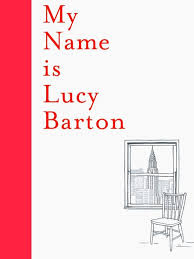 “…..I think of something Sarah Payne had said at the writing class in Arizona.  “You will only have one story”, she had said.  “You’ll write your one story many ways.  Don’t ever worry about story.  You have only one.”

This is the  fifth novel by American author, Elizabeth Strout.  She is most famous for “Olive Kitteridge” (2008), which I have not read but which recently gained a new lease of life following the multi-Emmy prize winning adaptation by HBO starring Frances McDormand.  It is a sparse tale, a well-written series of observations from the main character, a twice married author from a poverty-stricken background looking back on her life.

Lucy’s one story focuses on a nine week stay in a New York hospital in the mid 80’s as a result of complications after an appendectomy.  Her mother, who she has not seen for many years, comes to sit beside her bed.  The two, struggling through their difficult relationship swap incidents and memories of their past.  With the reality of their own past being too much to deal with the talk is often of people they knew distantly.  Lucy reflects on her childhood, her life at the time of her hospitalisation and on the years following this.  Much is understated and anyone wanting a full revelation of Lucy’s background will need to piece it together from the events described.  The tale moves quickly through short sections.  The only characters we really get to know is Lucy and her unpredictable, enigmatic and extremely bottled-up mother.  The city of New York has a part to play, the hospital is in the shadow of the Chrysler Building and the city swallows up the people who vanish from Lucy’s life.

It is a very quiet novel with the hushed calmness of the hospital dominating in its superficial way.  Like Lucy’s hospital room the calmness belies how much is going on under the surface.  It is a quick read and moments will no doubt linger but I wonder if it just a little too subdued to wow the Man Booker judges.  I would be pleased to see it on the shortlist but would be very surprised should it win.

Its length and the potential for open-ended discussion would make it a productive reading group choice.

My Name Is Lucy Barton was published by Viking in 2016