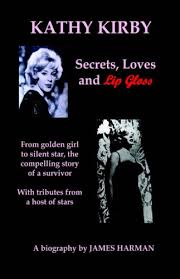 This is a very British tale.  The story of the singer dubbed “The British Marilyn Monroe” who at one point in the mid 1960’s was reputed to be the highest paid woman on UK television – and then it all went wrong.  I think this is what is termed a “published on demand book” (I got my copy from Amazon ) by Harman, a life-long fan who went one step further and for a short time believed he could engineer a comeback when he became Kathy Kirby’s manager.  It didn’t turn out quite the way he planned it.

Kathy Kirby   and Ambrose at the peak of their fame

Essex-born Kirby was discovered by Bert Ambrose, a band leader, big in the 1940’s, who by this time was really from another era who saw her as a way of bringing a younger audience to his venues.  Her look, the obvious glamour and the fantastic voice made her a television regular and she was very much a household name even before she began a run of chart hits in 1963-5.  Kirby was very much controlled by the much older Ambrose and they became lovers.  He reputedly financially exploited her, gambling away her money whilst all the time convincing her she was a great star.  When Ambrose died Kathy went into free fall- a catalogue of bankruptcy, incarceration in a mental hospital, inappropriate relationships, attempted comebacks and increasing mental health problems.  For the last years of her life she lived very much as a recluse, shunning the limelight she once craved.  She died in 2011, but throughout Harman’s work there is the hope that she would return and shine in show business again.

The structure of the book is odd.  It begins with an extended series of tributes from those in the business, wishing her well.  Frank Ifield uses it as an excuse to plug his autobiography and when you get to singer from much the same era, Julie Rogers, beginning “Kathy and I never met” you do begin to question this format.  The narrative throughout is brokn up by italicised sections of Harman’s own words and reminiscences, rather needlessly as the whole book is surely his own words and reminiscences.  That aside, this book is a permanent fixture on my bookshelves because of the absolutely fascinating story he tells.  I re-read this to remind myself of some of the incredible things that happened to her before reviewing the Essential CD – The Very Best Of Kathy Kirby.  Kathy was obviously too naive for a life in show-business but kept attempting to bounce back – a real survivor.  She was also too honest for the press and many  way hastened her own “downfall” by the things she told them.  The media treated her very much as the girl who found fame and lost it, creating a self perpetuating myth which got her selling stories but probably didn’t do her much good.  If anyone wanted a view on the fickleness of fame it was Kathy they turned to.  The Sunday press were always keen on stories about her and scandal made good reading- her every mistake and misery was taken apart by the press.

Kathy was really just a victim of changing tastes in popular culture.  By the 1960’s fame was not a life-long thing it had maybe been the generation before  and Kathy became one of the many casualties of changes in pop music at this time and yet she railed against this.  She was determined to remain a star, her legion of fans saw her always as a star but bookings diminished to bingo halls and restaurants as, despite the talent, she was just no longer in vogue and that had a serious effect.  As time went by she became deemed to be“difficult” which further compounded things.

For anyone who wonders “Whatever happened to Kathy Kirby?” Harman’s tale is an eye-opener and very much a tale of the shallow world of showbusiness and the vulnerability of some who rose to the top.

Kathy Kirby- Secrets, Loves and Lip Gloss was published by Mediaworld in 2005