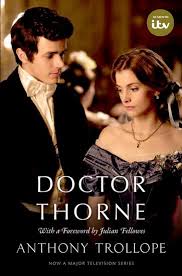 This is the third of Trollope’s “Barsetshire” sequence and even by the author’s admission, takes quite a while to get going.  There’s a lot, he informs us, of back story which we need to get to grips with before his plot can unfold.  He even apologises “for beginning a novel with two long dull chapters full of description” (that would be the modern publishing deal out of the window then), but Trollope is a master of lighter-than-you-would-expect him-to-be classic fiction and it isn’t long before his characters are winning us over.

Dr Thorne lives with his niece.  Her father died in a brawl with the brother of the woman he had got pregnant.  A story was told about the baby not surviving and the mother went off to America where she married and had a new family.  Few people know of Mary Thorne’s real background.

She is the object of affection for the Squire’s son, Frank Gresham, who needs to marry money if the family’s status is going to continue.  Mary Thorne is considered a disastrous match and that’s without most knowing the full details of her parentage.  How much should Dr Thorne reveal and to whom?

Trollope handles this kind of social comedy very well and has sparkling characters on the sidelines, including the older heiress lined up for Frank, Miss Dunstable and the drunken reprobate Sir Roger Scatcherd, the killer of Mary’s father. 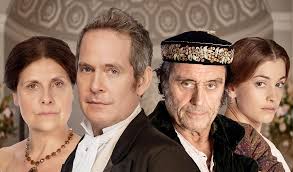 ITV recently did a good three part adaptations starring Tom Hollander as Thorne and Ian McShane as Scatcherd.  They simplified Trollope’s plot to get to the resolution in three hours but it helped keep me moving through some of the legal intricacies and Trollope’s digressions.  Thorne is viewed sneeringly by the other local doctors and politics of the time is lampooned when Scatcherd stands in an election against tailor’s son and beau of Augusta Gresham, the pompous Mr Moffat.

After a slow start this ends up certainly on a par with the two earlier book and by choosing to continue the general location and selected themes rather than the characters (other than the odd cameo performance) it would imply that there is much mileage left in his “Barsetshire novels.”

Dr Thorne was published in 1858.  I read a free e-book version.  There are many print and digital versions available.