Day 41 without internet access.  It seems that BT Open Reach have at last got round to doing what was needed to give me Broadband (in a property where there was broadband already) but for the last few days we have been “backed up in the system” whatever that means.  This means that the line still has not been showing as “order complete” and that needs to happen before our EE router gets triggered and actually sent to us.  It apparently can take 5-8 working days before the problem in the system is sorted and there seems to be no way that EE (because I am being told that they are systems based) can actually send off the router before then so we can check that the broadband work which has apparently been done has actually been done).  So no Broadband for Xmas or the New Year then on an order that was placed in the beginning of November!  The whole thing is beyond belief- hard to believe its soon going to be 2017.  A complaint has been registered to Ofcom on our behalf but that does not seem to make any difference to BT Wholesale whose job it is now to sort out the mess they have created (in their own time).  I have spent over 5 hours on the phone on this just this week alone. All I want to do is get back into the swing of posting and reviewing…………………………….  Here’s a book to consider…. 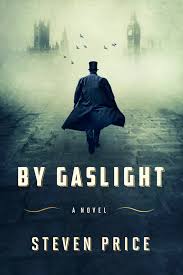 I think most reviewers experience a slight sagging of the shoulders when faced with a long novel.  Anything over 600 pages and I know that the To Be Read pile is going to be mounting up.  Long novels have to be really good to get over the anxiety of not meeting deadlines.  Canadian authors Steven Price’s doorstep of a Victorian-set novel comes in at 730 pages of a large format paperback.

I’m not writing off those authors who wish to write at length, especially with a nineteenth century London setting.  One of my all time favourites is Michel Faber’s “The Crimson Petal And The White” (Bloomsbury 2002) and one of the things I love so much about it is how Faber, right from the start, takes the reader in hand and leads us through the daunting opening chapters really drawing us into the reading marathon he has set up for us and ensuring that we last the distance.  My main  criticism of Price’s second novel is that it is initially rather difficult to get into which, given the length and heaviness of the book, might lose him some readers.

Main protagonist William Pinkerton is the son of Allan, who set up the famed Pinkerton Detective Agency in 1850.  Using this real-life basis Price spins his fictional tale of treachery, crime and families from these two real-life characters.  Pinkerton the elder became obsessed with a thief known as Edward Shade, an appropriately shadowy figure who managed to evade all attempts to track him.  Following the old man’s death, the son, William takes on this obsession and, following a lead, comes to the foggy streets of London in the 1880’s.  When a mutilated female corpse is extracted from the river Pinkerton becomes involved in a police investigation with the hope that it will lead him to Shade.

At the same time fellow American, Adam Fool, thief and confidence trickster, arrives in London with his entourage of heavy man Fludde and young “dipper” Molly also on a quest to find the woman Pinkerton believes will lead him to Shade.

The narrative switches from London to the events of the American Civil War some 20 years early where Price gradually unfolds the motives behind the events in London.  As a writer he sometimes leaves us too much in the dark and sometimes, because of the novel’s length, puts in a fair amount of repetition to keep us in the loop.  This does make me question whether some of the length could have been pared somewhat.

Around 500 pages in things began to click into place and I found myself more gripped than I had been.  Price is a poet and is able to easily to summon evocative passages and descriptions but I did feel sometimes, through the atmospherics, that I would have welcomed more variety in terms of pace.  He may be a little guilty of over-reliance of attaining authenticity in his portrayal of the London streets.  The pace does ramp up for the last quarter but I am concerned that readers may have flagged by then.  The plot revelations and outcomes were not shattering as Price sets them up quite a bit in advance but the ending is involving and made me realise that my investment of time with this novel was well spent.

By Gaslight was published by Oneworld in  September 2016