Day 45 from the date I was told I would have internet access and I have it!! Hallelujah!  It’s a Christmas miracle – not even an apology from BT so far.  Anyway, I’m feeling jubilant, I’ve just been to the panto (“Cinderella” at Shanklin Theatre) and to celebrate here’s a review of a second good book by Tommy Wieringa that I have read this year………. 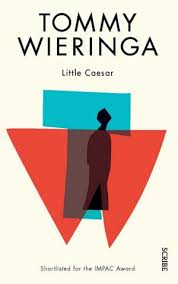 Scribe continue their English publications of Dutch author Wieringa’s works with this translation (by Sam Garrett) of his 2007 novel “Caesarion”.  This is the third of his books I have read to date and although it is not quite up there with “Joe Speedboat” it is a fascinating read.  Elizabeth Strout and Deborah Levy have both published highly acclaimed studies of the daughter mother relationship this year but Wieringa here focuses on mother and son.  This relationship is the most dynamic aspect of this novel.

Ludwig Unger returns to Suffolk for a funeral.  He and his mother had settled there some years ago until their cliff-top house collapsed into the sea.  His mother has recently died and all this revisiting of the past sees Ludwig recalling events.  Ludwig is an odd combination of talented pianist and rugby player and is not that sympathetic a character.  His mother lives her life without responsibility or even being able to account for her actions.  His frustration towards her is palpable throughout and totally understandable.  His father, who left when Ludwig was very young is even more morally dubious, an artist who specialises in demolishing natural environments in the name of art.

Wieringa writes beautifully and this is an unpredictable read and I was drawn into this young man’s search for support.  There is throughout a coolness and detachment which was reminiscent of the author’s “These Are The Names” yet in its strength of characterisation it feels closer to “Joe Speedboat”, but the warmth and humour of that novel is replaced with a degree of impassivity with the character’s dealings with one another.  Both this and “Joe Speedboat” can be seen as coming of age novels but the latter faces adulthood with energy and vivacity whilst Ludwig has been aged by parent/child role reversal and faces this part of his life with a wandering listlessness.  Both are valid responses, given their circumstances, but I must confess I found it more rewarding to spend time in Joe’s company.

Little Caesar is published by Scribe in the UK in January 2016.  Many thanks to Scribe for the review copy.