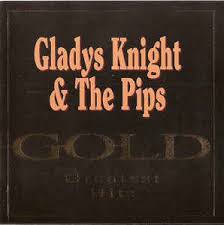 Gladys Knight, born in 1944 in Atlanta, Georgia, was a child phenomenon scooping first prize as an eight year old on the nationally televised “Ted Mack Amateur Hour”.  By the age of 10 she was working as part of her family group- alongside her brother and sister and two cousins.  This three girls, two boys incarnation of the Pips lasted until 1958 when Gladys became the only girl left in the group and two more male cousins joined.  By 1961 they had scored their first US hit as The Pips when “Every Beat Of My Heart” reached number 6. 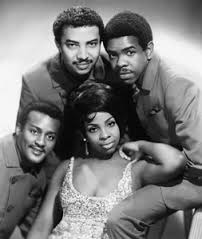 There were a couple of other appearances in the US charts in the early 60’s by which time Gladys had become the powerhouse in front of the group and this was acknowledged by pushing her name to the front.  In 1967 Gladys Knight and the Pips signed to Motown where great things were expected of them.  For the next six years they were regular visitors to the pop charts with tracks such as “I Heard It Through The Grapevine” (#2 in 1967), “If I Were Your Woman” (#9 in 1971) and “Neither One Of Us” (#2 in 1973).  In the UK a couple of tracks that hadn’t exactly hit set the charts alight in their homeland became big hits, “Take Me In Your Arms And Love Me” (#13 in 1967) and “Help Me Make It Through The Night” (UK#11, US#33).  The group felt increasingly confined by the Motown sound and Gladys, quite rightly assumed that they were not top priority on the label.  By 1973 after 13 US Top 40 pop hits and a reputation of being amongst the very best in the business the group left Motown and moved to Buddah records. 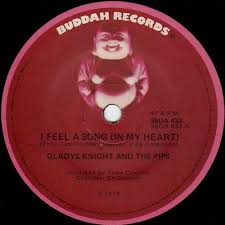 This is where this 19 track, budget compilation kicks in.  The Buddah recordings upped the sophisticated gloss of the later Motown tracks and by using top producers and great songs continued the run of hits for another few years, during which time the group were really at their commercial peak.  On this CD you get all 7 of their Top 40 hits of this period, including their only US Pop #1 hit.  In the UK the Buddah years were perhaps even more cherished than in their homeland as they scored 11 Top 40 hits between 1975-78, with a run of songs with which they are most closely associated over here.  They are probably one of the greatest groups never to score a UK #1.

Contained within these 19 tracks are three of my all-time favourites singles as well as a resoundingly strong collection of performances which shows how good Gladys Knight and The Pips were.  It kicks off with the biggest and the best, the all-time soul classic which is “Midnight Train To Georgia”.  This Jim Weatherly song started off life as another form of transport where “plane” took the place of “train”.  After the name change it was recorded by Cissy Houston, Whitney’s mum, whose version is very good but it is the vocal interplay between Gladys and The Pips which really took this song to another level.  Released as a single it topped the US charts in 1973 but was not a hit in the UK until 1976, by which time it was already an established soul classic when it reached #10. Gospel roots are very much in evidence as the Pips confirm, question and comment on the proceedings and even get to sound like the train with their “wooh-woohs”.  This is a track I never get tired of hearing and each time I marvel over the quality of the song and the performance.  This is a great way to start the CD. 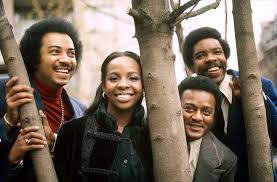 “I’ve Got To Use My Imagination” is a funky little track with driving drum and brass work.  There is this perception of Gladys Knight and Pips as a ballads-only supper-club type group but they could excel on the uptempo funk of tracks such as this as well as disco.  This was taken from their debut Buddah album “Imagination” and written by master songwriter Gerry Goffin alongside Barry Goldberg.  The US liked their Gladys Knight & Pips tracks a little funkier and more rhythm and blues based  than we did over here (further proof of this is the lack of pop chart success for the disco tracks that became some of their biggest and best hits over in Europe) and it reached number 4 in the US pop charts as a follow-up to “Midnight Train.”

Two more Jim Weatherly songs follow and first off is their second all-time classic track, one I love so much that I actually had as a wedding song (couldn’t run to Gladys performing it, however).  “The Best Thing That Ever Happened To Me” is such a well-written song, which could have been sugary in anyone else’s hands but with Gladys’ voice cutting through the whole thing is a sublime treat.  There’s a few lines in here that remain as almost a mantra in my head, one of my ultimate ear-worms as Gladys sings;

“If anyone should ever write my life story

Between each line of pain and glory

‘Cos you’re the best thing that ever happened to me.”

Gladys very appropriately named her autobiography “Between Each Line  Of Pain And Glory” (what else could she call it really?) On the best tracks the Pips’ contribution is vital, they operate far more than as backing singers and this is the case here.   It had previously been a chart-topper on the US country charts by Ray Price.  Gladys’ version topped the Soul Charts, went to number 3 in the US  pop charts and became another belated hit for her in the UK two years later when it reached #7 in 1975. 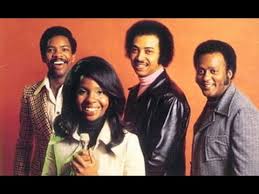 The third Jim Weatherly song was chosen as the debut single from the Buddah association.  “Where Peaceful Waters Flow” (US#28 1973) puts the Pips in a prominent position.  It’s a gentle, graceful track which is unlikely to be anyone’s favourite Gladys moment but always sounds good and fits in beautifully with this compilation.  This moves into the Pips led version of Johnny Nash’s “I Can See Clearly Now” which demonstrates clearly the group’s gospel roots.  The vocals are somewhat far back in the mix of this which is strangely effective but I think here Nash’s original version is the stronger track.

For a time Gladys looked as if she might follow Diana Ross into the world of Hollywood movies.  She starred in the film “Pipe Dreams” but the only thing that is now remembered about that is the title song written by Tony Camillo which makes its appearance next and is a very good example of a Gladys ballad.  Camillo continues the writing honours with Mary Sawyer on “I Feel A Song (In My Heart)” a track which just oozes with class.  It was the lead single from their third Buddah album.  Once again it is the driving quality of the performances that takes this to another level.  As a single, it perhaps wasn’t the best commercial option as its number 21 placing in 1974 ended their run of four consecutive US Top 5 pop hits.  It was, however, another R&B chart-topper for them.

If Gladys is associated with schmaltz it is probably because of the next track.  The song was a bit of a game-changer for them in the UK which saw them begin a run of consecutive hits and established them on radio playlists was a live version of the Barbra Streisand weepie “The Way We Were” teamed up with a hint of “Try To Remember” which Gladys largely speaks through.  It is a sentimental track but the live performance and Gladys’ voice when she gets into singing mode stop it from going over the edge.  In the UK it became the group’s biggest hit to date getting to number 4 and prompting re-issues of earlier tracks which hadn’t made the grade first time round. In the US it hovered just outside the Top 10.

From this point on Gladys’ chart performances were more consistent in the UK as we really took her to heart.  An association with disco supremo Van McCoy brought forth three top 40 singles and includes what I would consider to be the third all-time classic by this group.  I love the work that was done with McCoy, who died in 1979 at the tragically young age of 39.  Where he worked best is with gutsy vocalists who could cut through the lushness of his arrangements which combined together beautifully –so here I’m thinking of  David Ruffin, Melba Moore, Faith Hope and Charity and especially Gladys Knight & The Pips. The driving “Come Back And Finish What You Started (UK#15 1978) the disco bounce of “Home Is Where The Heart Is” (UK#35 1977) are great tracks but eclipsed by “Baby, Don’t Change Your Mind” (UK#4, 1977) which effectively conveys the paranoia towards a partner’s commitment once his “ex is back in town”.  This track also marvellously rhymes “mind” with “genuine” and all to a disco beat.  I know that many soul artists struggled during the disco years and didn’t hold the music they were being asked to do then in high esteem but Gladys is just great at this and these tracks show why. 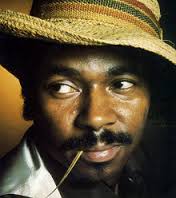 Elsewhere we get Gladys re-exploring “The Way We Were” feel with a version of “Georgia On My Mind”; one of the most sensitive vocal performances ever on David Gates’ “Part Time Love” (US#22, UK#30 1975) and a couple of Curtis Mayfield penned and produced tracks which came off the soundtrack for a movie “Claudine” which starred Diahann Carroll.  “On and On” (US#9 1974) is a track which has grown on me over the years and “Make Yours A Happy Home” (UK#35, 1977) has an irresistibly infectious warmth. 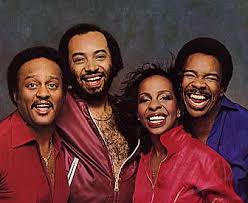 The Buddah association came to an end in 1980 when they signed to Columbia Records.  Towards the end of the stay Gladys and the Pips began to explore solo projects.  The Pips could never be great without Gladys despite good vocals and excellent stage presence but Gladys without the Pips recorded one of the great James Bond Themes in a “Licence To Kill” and topped the US charts as part of the Dionne Warwick led AIDS fund-raiser “That’s What Friends Are For”.  The post Buddah years threw up a few good tracks for the group including the Ashford-Simpson penned “Bourgie Bourgie”.  In 1988, 27 years after their first chart hit the group disbanded and Gladys embarked upon her solo career.  Pips Edward Patten and William Guest are no longer with us but Gladys now aged 72 released her latest album “Where My Heart Belongs” in 2014.  Her recordings encompass R&B, standards, jazz and gospel, where she has remained incredibly active.  She is truly one of the legends of the entertainment business.

I’ve gone for this European budget compilation using tracks licensed from Buddah because it contains the Van McCoy songs which, because of their lack of commercial US success, some compilations do not feature.  There is also of course great Gladys and Pips tracks to be found from the Motown years (the double CD “Anthology”from 1990 brings out the best of these) as well as great tracks from after the Buddah years, but this is the one (although not the easiest to find and with no frill in the packaging department that I would consider to be essential.  There is a 2006 Double CD available also called “Gold” which takes in both the Motown and post- Buddah years but for a single CD compilation this one is hard to beat.

Gold is currently available from Amazon in the UK for £7.99, and used from £0.81. It does not seem to be readily available in the US.