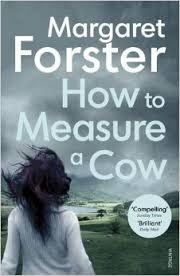 Margaret Forster sadly left us in 2016 and this is her final novel published just after her death.  She was a prolific writer of some 27 novels and a number of non-fiction works.  Perhaps her most celebrated novel is “Georgy Girl” (1965) which summed up the swinging sixties as both a book, a film and the theme tune by The Seekers.

I have never before read any of her novels and it seems a little strange starting at the end of her work with this critically well-received publication.

Sarah Scott is starting a new life with a new identity and in a new location following time in prison.  She puts a pin in a map and selects Workington for this.  Sarah Scott is very different personality-wise from the person she has been before.  Will she fit into life in Workington in a mundane job and living in a back-street terrace with an elderly neighbour as her only friend or will her former self break through?

It’s a very tight, tense read with Forster only drip-feeding us information about Sarah’s past.  A reunion of old friends beckons which will challenger her commitment to her new identity.  In part, however, this is a study of the two lead characters, someone leading a double life and of the lonely neighbour, trying to relearn how to make friends. This element of the novel feels poignant and is very touching.  Plot-wise it all feels like it is building to something immense but this doesn’t quite kick in with the power I was expecting.  There is no denying that it is well-written by someone who was totally confident with her craft and characterisation is strong.  What Forster obviously excelled in is portraying the dynamics between her female characters in a way which feels thought provoking and convincing.  She here has produced a closely plotted novel which will delight her fans.  It has proved a good introduction to her work and I will be seeking out further titles.

“How To Measure A Cow” has been shortlisted for the Bookhugger Book Of The Year over at Nudge books.  Take a look to see the other nominations and if this is your favourite read of the year vote for Margaret Forster.  You have until  10th February to register your vote.

“How To Measure A Cow” was published in 2016 by Chatto and Windus.