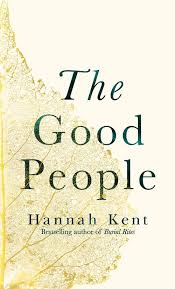 Having only very recently read another Picador publication “The Wonder” by Emma Donoghue it is easy to see parallels between that and this book,  Australian author Hannah Kent’s second novel.

Both are set in nineteenth century Irish villages and feature the highly questionable treatment of a child as central.  In both novels belief overshadows rational thought.  In “The Wonder” it is religious fervour which proclaims a child not eating as a sign of the miraculous, in “The Good People” religion is itself at odds with the lore of fairies and the superstition of deeply entrenched folklore.  The local priest can only speak out about this, his influence upon it is limited.  In many ways this makes for a book that is darker than Donoghue’s but both are equally effective.

When the son of Nora Leahy’s recently deceased daughter fails to develop in the way he should the locals believe that he is a changeling and that the real Michael has been swept away by the fairies (the “good people” of the title). It is when Nora seeks the help of the isolated local wise woman Nance (described by some as the “herb-hag”) that Nora begins to believe they can get the real Michael back.

The evocation of life in this Irish valley a day’s walk form Killarney, Co. Kerry, is very strong.  Is there currently some masterclass about recreating the hardships of nineteenth century rural life dominated by peat, mud and potatoes that both Kent and Donoghue attended as they both manage to get this over very convincingly.  It is a tough existence where the survival of the community is so much to the fore that superstition provides a strong grounding for luck or lack of it.  Kent has used a real incident as her starting point and has developed believable characters and highly plausible situations. At times this can make for difficult reading as misery is heaped on the unfortunate child “to put the fairy out of it.”

Anyone expecting tweeness so close to the realm of the fairies would be wrong.  What you get from this book is the real sense of how important folklore was to this village’s everyday existence.  This suggests seamless research as the book is saturated with the feel of the times.  It is dark, has a strong sense of foreboding, with inevitable tragedies and is a very involving read.

The Good People is published in the UK hardback by Picador, an imprint of Pan Macmillan  on the 9th February.  Many thanks to the publishers and Netgalley for an advance review copy.