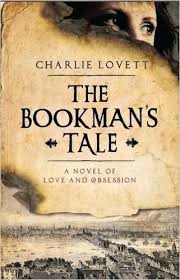 Here is a debut novel that I missed out on when it was first published in 2013 and I’m delighted to put that right as it is a thoroughly entertaining read.  Combining the adventure and puzzle-solving of a superior example of the “Da Vinci Code” genre with old books certainly gives it an original slant.  I’ve never read a novel with so much information on book binding and preservation and which has got across so well the appeal of old books.

Author Charlie Lovett is also a playwright, and significantly, for the authenticity of this work, a former antiquarian bookseller and this love for the quest of a miraculous find which is surely present in all those who deal with old and precious books certainly permeates this novel.

American Peter Byerly is drawn into the world of books when he is working at his University’s library and finds his way into Special Collections.  He’s also drawn, for the first time, into connecting with another human being when he meets Amanda, another student, in the library.  Lovett’s tale switches from their courtship to Peter adapting to the early death of his wife some years later and a much older tale of a book which would provide ultimate proof that Shakespeare wrote his plays.  A discovery of a portrait inside a book in a shop on Hay-on-Wye provides the link for these strands.

It works well as an adventure tale but it is more than this as it also works as a love story and an account of obsession, in this case towards book collecting.  It features (and Dan Brown and some others of his ilk need to take note here) well rounded characters.  There’s a clear motive behind every action and we’re not hurtled around the world in wearying globe-trotting fashion.  True, the use of coincidence does begin to pile up, but then the author’s following a time-honoured tradition headed by Hardy and Dickens who were both masters of coincidence to further the plot.  Some of the love scenes are also a little clunky but the two young people have never really related that well to anyone before so perhaps its applicable for the characters if the early days of their relationship seem a little stilted.  I was won over by the obvious devotion for all-things-book-related and by the skill in which this perhaps rather unsexy passion has been incorporated into what is rather a thrilling read.

The Bookman’s Tale was published by Alma Books in 2013.