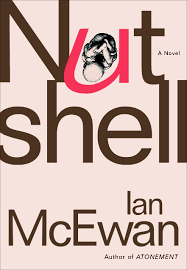 I feel that Ian McEwan has been part of my reading life for a long time.  I was 18 and supposedly revising for my A Levels when I discovered his first two collections of short stories, the Somerset Maugham award-winning “First Love, Last Rites” (1975) and “In Between The Sheets” (1978).  I had never read anything like these tales ever before.  I also devoured  his dark debut novel “The Cement Garden” (1978) whilst I should have been listing the reasons for the French Revolution.

His next couple of novels seemed slighter affairs but I was back with him for “The Innocent” (1990) and particularly for his tale of  hot air balloons and obsession “Enduring Love” (1998), a book I am determined to re-read this year to see if it is as good as I remembered.  His 1998 Booker Prize winning “Amsterdam” is less memorable and came before the book which should have picked up every accolade going, his masterwork as far as I am concerned “Atonement” (2001), one of the best novels of this century so far.  I still have the last three before this latest, “Solar” (2010), Sweet Tooth (2012) and “The Children Act” (2014) sitting on my shelves waiting to be read but I couldn’t hold out when I saw “Nutshell” in my local library and had to borrow it and read it, especially as he is the current holder of my  Reviewsrevues Book Of The Year Re-Read Award.

My verdict- it is very good but not classic McEwan.  It lacks the richness and depth of his very best but it is a very involving and memorable read.  Narrated by a foetus in a womb this is certainly a crime novel with a difference.  This very well-informed youngster has picked up significant life experiences from listening to podcasts and the radio as well as a gourmand’s tastes from the rich food and copious amounts of wine his mother imbibes.  He has a vivid sense of the world he has never seen, two factors which make him a fascinating if not totally reliable narrator.  When he hears his mother and her lover, Claude, his father’s brother, plotting to kill his father (obvious shades of “Hamlet” here) he faces the dilemma of being a small part of a “perfect crime” coupled with a need for his biological father backed by an awareness of what repercussions there will be for his young life if things go wrong.

This is very much a character study of the three sides of the love triangle as seen through the (unopened) eyes of the embryo.  There are digressions aplenty as he attempts to make sense of his world before he makes an appearance and an attuned awareness of the developments of the murder plot.  The three adults are brought to life vividly but it is the unborn who the reader will be rooting for.  It’s original and like the best crime novels I did find myself holding my breath towards the end as McEwan’s plot comes to resolution.

Nutshell was published in hardback by Jonathan Cape in September 2016.  The paperback edition is due in June 2017.