The success of the first series of Peter Kay’s Car Share certainly took the  name-checked star and director by surprise.  It was a much lower-key  piece than we had come to expect from this larger-than-life stand-up.  It was subtle and character-led.  I was talking to a friend about it today who said they watched just one episode and it was like watching paint dry and in a way I know what she meant.  I think expectations were high for another series like “Phoenix Nights” which could make you laugh until your sides ache or something which reflected his live shows with not enough recovery times between jokes.  A series largely composed of two people sat in the car on the way to work needed time to work its magic.  But for those of us who stuck with it, the charm of the piece hit home.  It was almost a case of letting the jokes find you.  There were the big laugh moments but for much of the time this viewer would have little more than a wry smile.  Series 1 won the BAFTA award for Best Comedy and a viewer voted National TV Award.  This was a great surprise to Kay but not, perhaps for the majority of us who are now struggling to find TV comedy funny.  For the BAFTAs it was up against “Peep Show”, which I had given up with quite a few series back and “Chewing Gum” and “People Just Do Nothing”, two shows on smaller channels E4 and BBC3.  Kay’s uncommercial idea was the most commercial of the lot. The audience rating led National TV Award saw him a worthy winner against two comedy juggernauts, long past their prime “Benidorm” and “Birds Of A Feather” and “Not Going Out” of which I’ve seen only one episode. 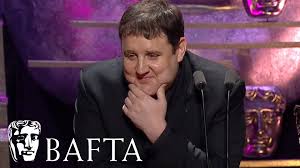 Peter Kay speechless at the BAFTAs

For those who had stuck with Series 1 and its more leisurely pace Series 2 was an essential.  The relationship between characters John Redmond (Kay) and Kayleigh, his car share partner from the supermarket where they work (Sian Gibson) was simmering nicely.  The warmth generated by these long-time off screen friends was palpable and it was this rather than laugh out loud jokes which made it special.  Series 2 consists of four episodes and once again followed the now more common but radical idea of having all four episodes available on BBC I-Player as soon as episode 1 has been transmitted.  Last time round I watched each episode as they were shown on a weekly basis, not really understanding why anyone would do anything different.  At time of writing two episodes of Series 2 have been transmitted, but for the purpose of this review I have found myself downloading and watching the other two.

Checking reviewsrevues for a good review?

This series seems to be bookmarked at each end by two quieter episodes.  The first re-establishes the characters, carries on from Kayleigh giving John a copy of her all-time favourite album (Now 48) with a note to listen to a specific track (“Pure And Simple” by Hearsay).  According to news reports the reintroduction of Now 48 to Series 2 caused a huge demand for the 16 year old double compilation CD which led to appearing it on Amazon.co.uk’s Charts on the basis of its second-hand sales alone.  That demand is still continuing.  Now 47 and 49 are in plentiful supply for a penny, yet Now 49 will currently set you back £24.75.  I absolutely love that this has happened on the strength of its mention in a comedy show.

I bet that has got you going off to the CD shelves to see if you own this potential money-spinner.  (I’ve just checked Now 46 is the closest I’ve got).  I enjoyed this first episode with Kayleigh attempting to find her own way to work “I’m in court shoes, I’m not Zola Budd.”  Much of the humour came from the soundtrack of Forever FM and the character’s reactions to the ads and playlist (Eurovision runner-ups Bardo’s “One Step Further” being a little gem here).  The fourth episode has to deal further with the relationship between John and Kayleigh with some knockabout comedy when Kayleigh finds herself locked indoors and a nod towards “La La Land” for the resolution.  Once again there’s musical highspots in Grandmaster Flash’s “White Lines” and Neneh Cherry’s “Buffalo Stance”.  However, in both of these episodes I found myself wishing that there was just a little more to laugh at.

Get it on E-Bay quick!

What lifted this series were Episodes 2 and 3 for different reasons.  Episode 2 (shown on BBC 1 last Tuesday) set the comedy up with John and Kayleigh on the way to a staff do fancy dress Chinese banquet but then handed the whole thing over to a new character, Elsie, who they give a lift home to dressed as a Smurf.  (“There’s no taxis, it’s the Ramadan”). Costume and make-up were so convincing that I wasn’t sure if it wasn’t Peter doing one of his double roles, which had fooled many people in “Phoenix Nights” days when he played Brian Potter and the bouncer Max.  It turns out that this comedy-tour-de-force was Conleth Hill, best known for his role as Varys in “Game Of Thrones”.  Peter played second fiddle and the result was comedy gold.  But for bigger belly laughs Episode 3, which will be shown on BBC1 this week is a gem.  When John and Kayleigh decide to skive off work for a day it leads to a section which had me laughing like I haven’t done for a TV comedy in ages- a sequence where laugh is piled upon laugh which was certainly nothing like paint drying!

Not Peter Kay but it could have been! 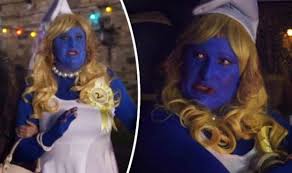 This second series of four episodes has felt familiar and yet surprising.  I love Peter Kay when he is unsubtle (presenting Royal Variety Performance and in the magnificent TV talent show spoof “Britain’s Got The Pop Factor….”), I love his stand-up (made Guinness Book of Records for most successful of all time playing to 1.2 million people) I loved the whole set-up of “Phoenix Nights”, have enjoyed his three number 1 UK hit singles, but admittedly was not wild about his “Max and Paddy’s Road To Nowhere” series.  This revitalised attempt at a very British road trip, a car share journey to work, has seen him once again getting close to comedy gold.

(On the strength of Episodes 2 and 3)

The third episode of “Peter Kay’s Car Share” will be shown on Tuesday on BBC1 at 9pm.  The whole series (4 episodes) is currently available to view on the BBC I-Player.