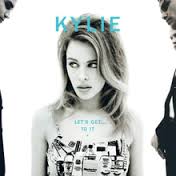 Kylie Minogue’s 4th studio album was the last for the PWL label which had transported her from Aussie soap actress to international singing star.  It was very much a parting of the ways.  Kylie would go on to leave the label to join Deconstruction for her next release.  The PWL label masterminds were already down to two thirds strength as  life at the” Hit Factory” which had spawned close to 100 UK Top 40 chart placings by this time was beginning to waver.  The UK chart of 13th October 1990 was the first for over two years that had no Stock, Aitken and Waterman produced songs in it.  A burnt out, stressed Matt Aitken left the team leaving Mike Stock and Pete Waterman to work with their number one artist.

The men from The Hit Factory – Stock, Aitken and Waterman

“Let’s Get To It” ended up as Kylie’s least successful studio album .  The number 15 placing is lower than anything apart from compilations and mix albums.  All this is rather bizarre, as it is one of her best and is certainly superior to the three she had put out with the SAW team in the previous three years.

One of the most watched TV weddings of all time

Kylie Minogue joined the Australian soap “Neighbours” as garage mechanic Charlene in 1986.  At this time the show, broadcast at teatime in the UK, was gaining huge audiences and the romance between her and character Scott, played by Jason Donovan, captured the British public’s attention in a very big way and ensured that both actors were well on their way to becoming household names over here.  A recording deal for both was inevitable.  Kylie signed to the Australian label, Mushroom records and her first recording, a cover of Little Eva’s “The Locomotion” became Australia’s biggest selling single of the 80’s and number 1 over there for seven weeks.  Sensing international success, the label sent her over to work with Stock, Aitken and Waterman.  The story goes that they forgot she was waiting to see them, had very little to offer her and quickly wrote a song “I Should Be So Lucky” which became a massive hit single in many countries and began the reign of the new pop princess.  The trio remixed the first Australian hit and released it as “The Loco-Motion” which gave her another worldwide smash.  The first two albums “Kylie” (1988) “Enjoy Yourself” (1989) were both huge number 1 albums in the UK, but were pretty light pop confections, centred around the hit singles, of which there were becoming many.  The third album “Rhythm Of Love” saw Kylie beefing up the image somewhat.  It contained probably her two best ever singles “Step Back In Time” and the phenonomenal “Better The Devil You Know” and it was probably around this time that  I joined the Kylie party.  As an album it is still a little patchy apart from these tracks.

Album number 4 seems to carry on with what “Rhythm of Love” had attempted in making Kylie a credible artist who could achieve commercial pop success and also extend the fan base from those who would put up her poster on their bedroom wall.  This album, in its range of more mature styles, together with Kylie’s consummate stage performances help pave the way towards the longevity which has really been extraordinary in the pop arena.  That people didn’t buy into it in this occasion has always been puzzling.  It might just have been by 1991 people had tired of the whole domination of the Stock-Aitken-Waterman sound in the UK charts and that the backlash was beginning to set in.  The trio had scored their last number one production the year before in 1990 with Kylie’s rather pedestrian cover of “Tears On My Pillow”.  It might have been a wise move for Kylie to move on to the more street-cred label Deconstruction, but this was actually a stronger album than the two released on that label. 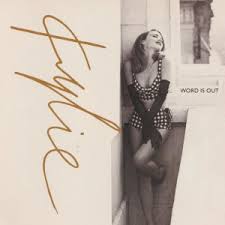 The first of the ten tracks on display was lead single “The Word Is Out” which saw Stock and Waterman experimenting with New Jack Swing.  It was the  jury that was out with this one as well as the word, as with its number 16 UK Chart placing it became her first ever single to miss out on the UK Top 10.  It’s a chunky little opener and I have always liked it.  It almost has a group feel to it as it features an uncredited male vocalist taking a bit of the lead just before the end.  It’s a great opener, rather than classic Kylie.  I think it shows that the producers were not stuck in a groove, the criticism being levied towards them at this time was that their songs were beginning to sound the same.  This is a definite attempt to keep up with the sounds that were current in 1992- I just think that New Jack Swing was not always dated that well.  The single did make the Top 10 in Australia and Ireland. 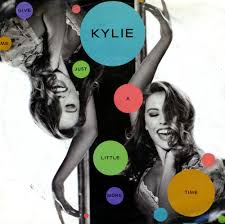 Cover version time up next and Kylie’s version of the great song by Chairmen Of The Board “Give Me Just A Little More Time” became the big success off the album when it was released as the third single becoming her sixth track to reach number 2 in the UK.  This an affectionate cover version with a nod towards the original artists as Kylie includes lead singer General Johnson’s trademark “Brrrr”. Like other Kylie covers, the chart-topping “Tears On My Pillow”, and “Celebration” they do not challenge the originals in terms of quality.  This, however, is the most successful of the three by far. (I think “The Loco-Motion,” which let’s face it, is going to be a fluffy novelty track whoever sings it does actually challenge Little Eva’s as a fun track for a generation who did not know the original)

“Too Much Of A Good Thing” has a Madonna feel to it and a nod towards House Music.  It is the first on the CD where Kylie also takes writing credits alongside Mike Stock and Pete Waterman.  “Finer Feelings” was the fourth hit single taken from the album.  Four hit singles show that this album was certainly no slouch quality wise.  It shows a mature Kylie, some distance away from “The Locomotion” and “Hand On My Heart”.  Kylie references sex on here, for goodness sake!  The whole thing comes across as really quite sophisticated and was perhaps a precursor to the type of tracks which appeared on the first Deconstruction album.  Although the UK bought enough copies to take her to number 11, her native Australia were not so sure as it became her first single to miss out on the Top 50 over there.

There’s a definite nod towards the American market with the slightly Disney sounding ballad duet “If You Were With Me Now”.  To this point in the US Kylie’s SAW debut had reached number 28, but “The Loco-Motion” had passed expectations and reached number 3.  From then on things had been a bit of a struggle (the non UK single “It’s No Secret” crept into the US Top 40 at number 37) but there was enough kudos to persuade an artist who looked like he was on the way to become a big US Soul star, Keith Washington, to record with her.  Her first duet, with Jason Donovan “Especially For You” had charmed and topped charts but it was one heck of a cheesy track.  This, still a little schmaltzy felt like a much more mature track and took the pairing to number 4 in the UK Singles chart.  It became the first hit single to credit Kylie for her songwriting.  The duo, in what was then common in pop music, did not record their vocals together and only met for the filming of the video (where oddly, they also do not appear together – somewhat like the Patti Labelle/Michael McDonald track “On My Own”).  Here once again the song’s lyrics have been interpreted literally.  Washington, incidentally, had topped the US R&B charts with his debut single “Kissing You” and won a Soul Train Award but lasting success eluded him.  He puts in a good vocal on this track and is well matched by Kylie’s.  If it was an experiment to garner American sales, however, it did not work.  Kylie would have to wait another ten years for her next US hit.

Title track “Let’s Get To It”is a rare thing.  It was perhaps the first great Kylie track not put out as a single.  It’s a real earworm of a song and probably my favourite on the album.  It’s mid-tempo classic Kylie, builds well and stays in my head long after each listen.  Both “Right Here, Right Now” and “Live And Learn” are good quality album tracks and good examples of dance-floor Kylie.  “No World Without You” shows a different side of Ms. Minogue.  It is a nicely-performed, melancholy, sparsely accompanied ballad.

At the time eyebrows were raised by closing track “I Guess I Like It Like That” which boasted a harder dance sound than Kylie fans were used to.  It sounds like a track that might have had a big gospel disco diva such as Martha Wash or Jocelyn Brown on it.  At six minutes in length, it’s almost twice the length of most of the other tracks on the album.  It’s club music rather than commercial dance and this was somewhat of a departure.  It contains samples of 2-Unlimited, Salt N’Pepa and the Freestyle Orchestra and yet the whole thing blends well as a cohesive, contemporary track and shows that , in case there were still any doubters out there that Kylie was no pop puppet and that there was considerable diversity there.  And that is one of the reason why this ex-Australian soap star has had a music career now pushing thirty years.

Despite the disappointing sales this is a Kylie album that has stood the test of time and was a glorious final hurrah for the team who made her famous.  It was a brave move to leave this nest, but the time was right and there would be even better for her to come.