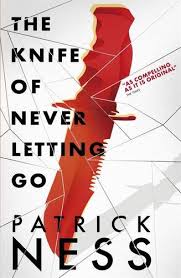 The first book in British author Patrick Ness’ “Chaos Walking” trilogy really does span boundaries.  Aimed at a teen audience it works well for adult readers.  Its Sci-Fi/Fantasy elements are well thought out and do not get in the way of first class storytelling and there’s so much running in it that I’ve classed it amongst my adventure novel/running man thread.

I’ve never read Patrick Ness before but I know he has many fans mainly through this trilogy and “A Monster Calls” which was recently made into a film.  Main character Todd Hewitt is approaching manhood as a settler in a New World.  A battle with aliens living on the planet has wiped out the human female population, made animals talk and all men’s thoughts expressed out loud as “The Noise”.  Todd makes a discovery which challenges all he has been told and the only option open to him is to run.

Patrick Ness has got me eating my words as here he does something I normally gripe about yet here it works.  Much of the novel is written in present tense.  I moaned about this in Andrew Pyper’s “Demonologist” a horror novel made significantly less scary as a lot of the action becomes reported rather than letting us readers experience it.  Ness avoids this largely because of his “The Noise” device.  With all thoughts coming out as a stream Todd’s narrative can be filled with interactions from other characters which enables it to remain in the present.

It makes for action all the way and works here as a narrative style just about as well as it can.  It also makes it quick to read but it can feel a little like it is all on one level.  He maintains a fairly high octane pace throughout which may frustrate readers looking for a little more light and shade.  Being much older than the intended audience I wasn’t sure about the talking animals but I was soon won over by Todd’s dog Manchee who becomes a great character in his own right.  Animals in novels always cause me anxiety in case bad things happen to them.  (I’ve discussed this before on here.  I can read all kinds of things happening to humans without flinching but put an animal in the mix and I become squeamish.  I used to think that odd, but a number of you have agreed with me).  The relationship between Todd and his dog adds much to the novel.

This kind of dystopian future feels right on trend and if this appeals then I’d urge you to seek this book out as it is so well done.  The world in which they live is revealed to us very much as it’s revealed to Todd and that provides a great opening for the trilogy.  We’re left with a cliffhanger and the edition I read had a bonus short story “The New World” (published 2013), which, because I knew by then how it fits into the general narrative proved to be chilling reading.  The whole thing would seem to be of lasting appeal to young adult readers and possesses the qualities to win over a much wider audience.