Well, I did it.  Once again it was right up to the line but I managed to get all of my stickers on my Book Bingo card.  Here is the proof! 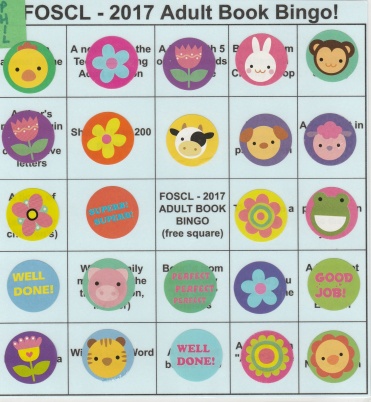 It did mean in the last month I had to make some slightly odd reading choices, which might explain the randomness of some of the last few reviews.  At the end of my last update my card was looking like this;

It looked possible, but I wasn’t convinced because the Man Booker longlist had been announced and I was itching to get started on those and couldn’t find any place for those titles in my remaining categories.  I had six books to read and this is how I did it:

On the top line I still had “A book with five words or more in the title”.  I first pulled from the shelf French crime best-seller “Murder On The Eiffel Tower” (2003) by those fascinating Parisian book-seller sisters Lilianne Korb and Laurence LeFevre who write together as Claude Izner with their series about a nineteenth century bookselling sleuth.  I have the first three of these waiting to be read and I thought this would be my chance until I was seduced by a copy of “The Wolves Of Willoughby Chase” by Joan Aiken (1962) which I really wanted to get my teeth into and which I knew would be a quicker read.  Time was at a premium by this point and so Izner has temporarily returned to the great un-read.

From the second row I needed a book that was “Shorter than 200 pages” so I went for the Quick Read “Chickenfeed” (2006) by Minette Walters.  Considering the third row I’d thought about polishing some worthy tome of poetry but went instead for children’s poetry collection (Well, it did suggest children’s poems in the square) “How To Embarrass Teachers” (2006) which, had I still been teaching Junior School Children, I would have added to my Essential Classroom Books list because I think there was a lot of fun to be had with this selection by Paul Cookson.

I needed to buy a book from the “For Sale” shelves at my local library and I was pleased to discover “Eeny Meeny” by M J Arlidge.  I know why the previous reader donated it, because although it looked in very good condition and had only probably been read once it was badly bound and fell apart as I was reading it.  I didn’t let that put me off too much and really got into Arlidge’s dark debut.  (This also happened when I read “The Night Circus” (2012) by Erin Morgenstern a couple of years back which, together with me being in bed with flu whilst reading  most of it and its self-destructing tendency did prejudice me against the book).  Arlidge’s novels have been getting really good reader-feedback in the libraries where I work from a real range of readers.

There were two squares for me to complete on the bottom line of the card and these were probably the two I was least enamoured by.  I don’t often read “Family Sagas” and find the look of those mob-capped mill girls of this genres stalwarts Catherine Cookson, Dilly Court etc all rather depressing.  I did discover something a lot lighter and more recent in Wendy Robertson’s “Sandie Shaw And The Millionth Marvell Cooker” (2008).  To be honest it wasn’t really a family saga at all but I think it had been categorised as such to fit in with a number of Robertson’s other novels which are more obviously family sagas, but it came from the right section, had the right sticker stuck on the spine and so it fitted the bill (and actually I really rather enjoyed it),

A book set before 1700 remained my final  square to cover.  This had caused a bit of panic amongst other Book Bingo participants who had this as some misinterpreted the category to be a book written before 1700, which caused blank looks around the library to find the medieval scripts section.  The correct interpretation opened the reader up to a whole range of highly readable historical and historical crime novels.  I went with the twelfth century and the introductory book to Bernard Knight’s Crowner John series “The Sanctuary Seeker” (1998) which gave me my last “Well Done!” sticker and finished off the card.

Once again the Book Bingo has been popular and successful and people are already talking about next year (maybe starting it earlier in the year).  I very much enjoy setting it up and doing it, but I’m glad I can move onto the pile of books waiting for me that I couldn’t fit in the categories as the squares began filling up.