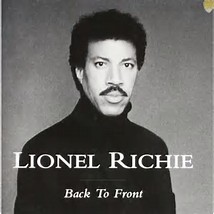 The Commodores were signed to the Motown label in 1972 and built up a following as a support act for the Jackson 5. Pretty much a funk band in the early days the group member initially playing the saxophone was one Lionel Richie from Tuskagee, Alabama. The group’s first hit “Machine Gun” (1974 UK#20 US# 22) was actually an instrumental where Lionel’s sax work can be heard. As the group diversified into ballads alongside the funk Lionel’s vocals began to be heard in hits such as “Sweet Love” (1976 UK#32, US#5) and the all-time classic “Easy” (1977 UK#9, US#4) and a song penned for his wife “Three Times A Lady” became the group’s first chart-topper on both sides of the Atlantic and opened doors for Richie. Asked to write and produce a hit for country singer Kenny Rogers, “Lady” saw Richie crossing into new markets and scored his biggest hit to date, his first US #1 in 1980. The following year saw Richie pen a song from the throwaway Brooke Shields movie “Endless Love” and record it as a duet with Diana Ross. In the US that became Motown’s biggest selling single to date with a nine week run at number 1. (In the UK it stalled at number 7). A solo career inevitably beckoned. 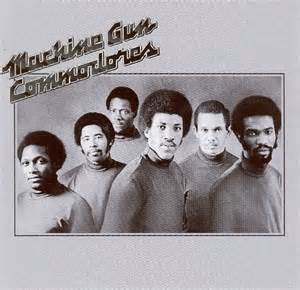 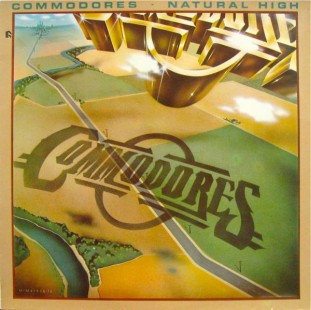 From “Machine Gun” to “Natural High” the Commodores became one of Motown’s biggest groups.

By 1992, after three huge selling albums Richie had experienced a five year career hiatus and to remove the pressure of having to come up with a whole new album Motown green-lighted “Back To Front” which would feature three new recordings alongside 13 of his biggest hits, predominantly from the solo career. The title explains the format- the new material was not tucked in at the end but led the recording. It brought Richie back into the limelight and topped the charts in the UK. It’s a great one- album introduction to what Richie was all about.

The format, does mean, however that the CD opens with the weakest track on display. “Do It To Me” like the rest of the new material was written by Richie and produced by Stewart Levine. All three were released as singles in the UK. This came out about a month before the album was released and is a pleasant enough early 90’s laid-back ballad with plenty of saxophone. It is a long way from the classic Richie songs and feels the most like album filler of the three tracks. It gave Richie his first UK Top 40 hit for over five years when it reached number 33. In the US it did better and became the highest placed track of the new material, scoring him his fifth solo R&B chart-topper and making 21 in the pop charts. In the UK we favoured the second release, “My Destiny” which is, as far as I am concerned, his last great single release. Its number 7 placing was his highest since 1986’s “Dancing On The Ceiling”. It also topped the charts in the Netherlands. It feels the most contemporary of the three, a slinky mid-tempo number which felt like just what Richie should have been releasing in 1992. It’s a great little sing along track

Major anthem status was sought out for the third of the three tracks, “Love Oh Love” which has the feel of “We Are The World” the all-star USA for Africa song written by Richie with Michael Jackson as part of Live Aid. This tracks hovers very close to the cheesy with its chorus of children, “Little Drummer Boy” rhythm and big themes of world peace and eradicating sorrow but rather like Mr Jackson’s “Earth Song” I personally think Richie gets away with it and it’s all rather charming. At the end of 1992 I thought this could garner the Xmas single market and be a big hit but it didn’t happen, falling short of the Top 40. Once again it had its strongest approval in the Netherlands where it was a Top 20 hit. 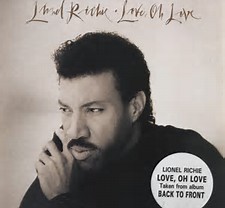 I don’t feel that these new tracks let the album down in any way but it is more likely that people purchased it for the remaining thirteen tracks, probably to replace on CD what was already owned on vinyl. There’s no chronological approach as suggested by the title, we just get a mixture of tracks from the back catalogue. As a solo artist Richie released three solo albums on Motown and here we get the cream of those tracks – just one from the first album, five of the original eight tracks from the second and two from the third. As well as this there is the non-album duet and four of his biggest Commodores hits to make up the 16 tracks. It made better sense to buy this on CD to replace a vinyl copy of “Can’t Slow Down”, that second Motown album, as you got the best tracks from that and much more besides. I don’t think it totally encompasses the cream of the Commodores output – for that I would recommend the 2005 double CD “Gold”. 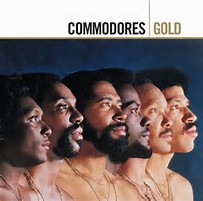 The thing that slightly overshadows Richie’s career as far as I am concerned is that with both his solo hits and works with the Commodores, the biggest hits, the ones that have come to define the artist are some distance from his best. “Three Times A Lady” with its quite traditional waltz feel and ever so cheesy lyrics sounded alright at the time of release and certainly broadened the group’s appeal with an older generation above their usual market falling for this schmalty track and it gave the group their first Pop #1 on both sides of the Atlantic. Solo Richie’s pretty-enough ballad from his second album “Hello” was the third single release off a very big release so something was needed to bring it to record buyers who had not gone for the album. A cheesy video, which at the time seemed more like a movie with a blind girl fashioning the head of Richie out of clay was fine for the first few viewings but then its out and out cheesiness became indelibly linked with the song in my head and is often the first thing people remember about Richie. This track also topped the Charts in the USA and became his only solo number one in the UK. I tolerate both these tracks on the CD but don’t exactly look forward to either of them, but probably for many people, these may have been what decided them to part with their cash for “Back To Front”. 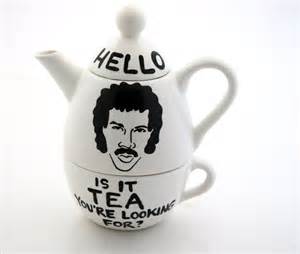 So, that’s the negatives done with. Let’s look at what is really special about this album. Firstly, that’s all the rest of the Commodores tracks, particularly “Easy”. How great a track is this? Penned by Richie and produced alongside James Anthony Carmichael, it is real laid-back sophisticated soul, stopped being totally as “easy as a Sunday morning” by one of the great guitar solos in a pop hit. There’s a great echoey feel to the whole thing. It’s one of the best not-out-of-Detroit Motown singles of all time. “Still” is also excellent and became their second US chart-topper in 1979 (in the UK#4) a real piece of calm amidst all the Disco that was released that year and sounding pretty much like a deep soul ballad with an orchestral backing. “Sail On” (1979 US#4 UK#8) perhaps underlines more than any of the others how close this group could go towards country music, and may have been behind the idea to have Richie work with country legend Kenny Rogers, this kind of musical boundary blurring quite unusual in the days of genre-specific radio play in the US. There’s a lovely build to this track.

To launch his solo career Richie took producer James Anthony Carmichael with him and with him now penning much of the Commodres material it was really the smoothest of transitions to solo stardom as first solo hit “Truly” fits in perfectly with The Commodores ballad sound. Another calm ballad very much in the feel of “Still” with the build of “Sail On”. It was an unsurprising US Pop #1 and reached 6 in the UK in 1982. 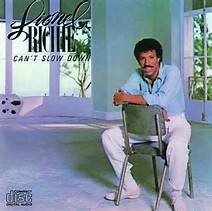 The album “Can’t Slow Down” was a clear statement at propelling Richie towards super-stardom. It fused musical styles ending up really as one of the early classic black pop albums and won the Grammy for the Album of The Year in 1985 and topped charts all around the world. The infectious “All Night Long (All Night)” proved that Richie wasn’t just a ballad singer but was also no longer the funk singer who snarled his way through “Brick House”. This was bright and breezy and intended for the masses and they loved it as it topped the US chats and got to number 2 in the UK. Its carnival feel ensured its worldwide success. Less showy but successful tracks from the album here included are “Penny Lover” (1984 US#8, UK#18), Stuck On You (US#3,UK#12) and the rock-lite of “Running With The Night” (US#7, UK#9) where a rock guitar which made “Easy” holds this track back . 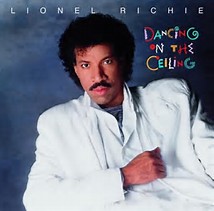 The third Richie solo album, “Dancing On The Ceiling” didn’t impress me nearly as much. The tracks included here, the title track, (1986 US#2, US#7) and “Say You Say Me” (US#1, UK#8) actually sound better now than they did at the time of release when I found one cheesy and one a little dull. Other single releases from the album, especially “Ballerina Girl” and “Sela” seemed to suggest Richie had lost his way somewhat as far as this record buyer was concerned. They are not included on “Back To Front” and led to a burnt out Richie beginning his extended break from recording and the public arena.

Lionel Richie was not able to build on the success of this album and it was not until 1996, four years after this compilation and ten years after his last studio album that he re-emerged on the Mercury label with “Louder Than Words”. Over the years his subsequent albums have seen him toying with R&B and hip-hop influenced tracks with varying success. Nothing he has recorded since I would consider essential, although there was a triumphant return to form in 2012 when a back-to-his-country roots album “Tuskagee” topped the US charts marking his first Number 1 hit in 26 years. This revisited his hits alongside collaborations with country music stars including Shania Twain, Willie Nelson and with Kenny Rogers on a new version of “Lady” which helped catapult him into solo fame. This was too much country for me, but it was great to have him back in the limelight. 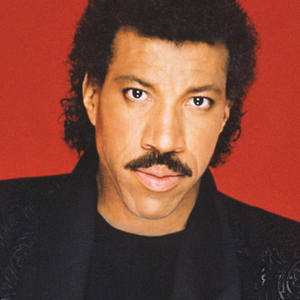 Richie has sold over 100 million albums worldwide and features on lists of the biggest selling stars of all time. This album reminds us why.