Now, before I start, I consider Dawn French to be a National Treasure.  She has kept me laughing for more years than I care to remember. I’ve watched every episode of “French & Saunders”, and some many times over and there is no doubt that their peak as a comedy partnership came quite a few years ago.  There has been a tendency from both Dawn and Jennifer to try too hard to get us to laugh and not all the projects that they have worked on, both separately and together have always been successful as far as I am concerned.  For Dawn, there can be both a darkness and a lack of subtlety which can creep in to the detriment of her work.

This was her first novel published in 2010 and which has just been sat on my shelves for the last few years waiting to be read.  I found her 2008 memoir “Dear Fatty” to be impressively written but her chosen style felt slightly alienating for this reader.  It was really a selection of letters aimed for those she cared about, reminiscing along the way.  I thought this device held the reader away at some distance, her offerings of wise words and advice felt like I was reading something I had no real business to read.  There were jokey letters to the likes of Madonna and David Cassidy which felt they were there just for a laugh and didn’t work well, but central to the piece were two recipients, Jennifer Saunders (the “Fatty” of the title) and, very powerfully, Dawn’s father who committed suicide when she was in her late teens.  Reading these letters in particular showed a writer who can work with emotions and humour which boded well for her as a novelist.

The buzz she got from writing this inspired her to have a go at fiction and this book is the result.  Structurally, she’s gone along similar lines to the letters by using the journals of members of a family to tell her tale.

Let’s just say she didn’t win me over immediately.  Dora is approaching eighteen in a fug of rage against her mother, Mo, a child psychologist who is struggling with her own teenagers, also including Peter who has adopted a fey Oscar Wilde young dandy persona.  It is largely these three who provide their accounts of the weeks leading to Dora’s 18th and Mo’s 50th birthdays.

To start with the vitriol in this family took me aback and I found it quite difficult to read.  In my job at the library I’m aware of a number of people who have borrowed this book with great anticipation and returned it with the feedback that they gave up on it quite early on.  I’m made of sterner stuff and persevered even when the characters were at their most unlikeable. I found myself waiting for laugh out loud moments which were just not coming.  In fact, once I began to appreciate that I wasn’t going to do this I found myself getting more into the plot and finding that this is all rather effectively done.  There’s actually a great deal of control being operated in what I found initially unsubtle and as the tale develops the characters did begin to win me over.  So much so that I felt a little bereft of their company when I finished the book.  Dawn has even included the cake recipes cooked for the family members by grandma, Pamela, who is the voice of reason throughout the turmoils of family life.  We all know that most problems can be alleviated somewhat by cake and here is the author illustrating this very nicely.

Once again, as with “Dear Fatty”, this was not totally what I was expecting and it took a while to draw me in but I found this a strong fictional debut which deserved the healthy sales it attracted. 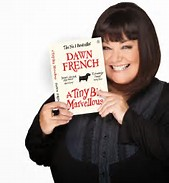 A Tiny Bit Marvellous was published in the UK in 2010 by Michael Joseph.