The good folks over at Nudge-book.com in conjunction with publicists Thinkjam contacted me regarding a book to film adaptation.  Due to unforeseen circumstances the book has not yet arrived but I have had the opportunity, thanks to Liongate to view the film which opens this week.

Stronger is the real-life story of Jeff Bauman who, in an attempt to win over his ex-girlfriend decided to stand at the finishing line of the Boston Marathon in 2013 with a congratulatory poster praising her achievement.  This meant he was at the wrong place at the wrong time as a terrorist bomb explosion shattered his life and led to a double above-knee amputation.  “Stronger” is the tale of Jeff’s attempts to fight back and get his life back on track. 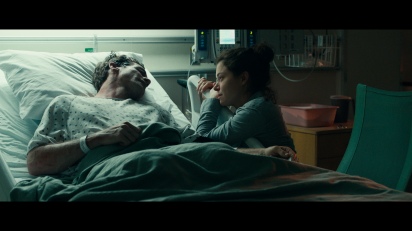 To be honest, this is not the sort of film I would normally seek out.  It makes for tough viewing and there is little in the way of light relief but it is undeniably very well done.  The film is directed by David Gordon Green, a screenwriter and producer, who has worked in different film genres and also in television since his critically acclaimed 2000 debut “George Washington” (not about the President) which he wrote, directed and produced.  It stars Jake Gyllenhaal as Bauman and Miranda Richardson as his mother, Patti.  Both performances deserve to be given consideration at Oscar nomination time.

We first meet Jeff in the middle of a losing streak.  His relationship with Erin has ended, he is botching things up in his job as a chicken roaster for Cost Co, he’s living with his mother who has a drink problem and socialises with a group of boorish macho sports fans.  His relationship has ended because “he never shows up”, the irony being when he does show up to cheer Erin on he gets blown up. 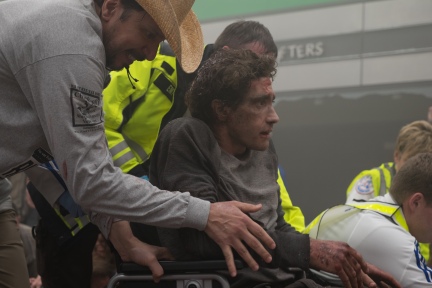 I do think that this is a film which will resonate more with an American audience.  There’s an entrenched Americanness which is inescapable.  It’s rooted in American working- class culture, depicting Jeff as an ordinary guy, which here comes across via sport, beer and macho male banter.  I did initially feel quite distanced.  There’s also the American sense of “Gung-ho” and flag-waving patriotism which we British viewers find a little strange.  In many ways the film does challenge this.  In a very unsettling scene Jeff has become a beacon of hope for the Boston community and the embodiment of the “Boston Stronger” campaign.  He is asked to come on to the rink with a flag at an ice-hockey game far too early in his rehabilitation and is unable to accept the title of “hero” which is bestowed upon him.  His family find this difficult to comprehend leading to a showdown with his mother when she invites Oprah Winfrey to interview him. 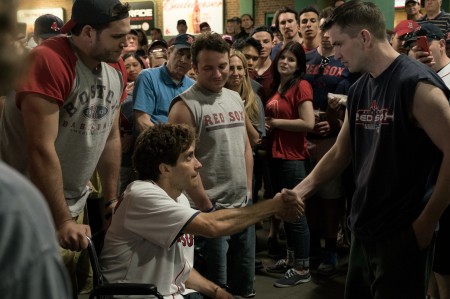 The whole thing is extremely sobering and powerfully brings home the long- lasting repercussions for Jeff and those around him.  A couple want their photo taken with him because they seem him as an example of “don’t let the terrorists win”.  Jeff’s response is that the terrorists have won- they have taken his legs from him.  It’s not possible to watch without sensing that taste of bitterness in the mouth.  A scene of reckless behaviour whilst drunk and high and the official response to it would have seemed too much if it was not obviously rooted in truth.  None of this makes for easy viewing.

We can tell from the title and the existence of an autobiography that at some point Jeff has to begin to put his life back together, but it does seem a long time coming.  A long-delayed meeting with the man who saved his life begins that process and we are left, inevitably and thankfully, with a feeling of hope for this extraordinary survivor. 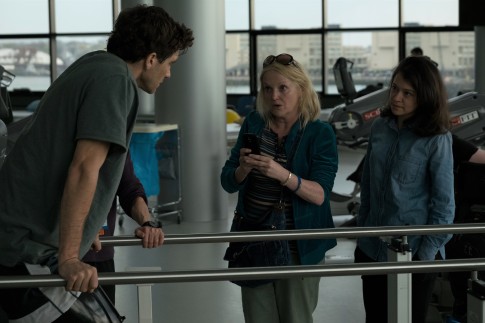 Jake Gylennhaal is a fair chunk older than Bauman who was 28 at the time of the bombing but he gives the part the right sense of experience and gravitas to make the painful scenes plausible yet watchable as it is hard to keep your eyes off him.  Moments where I felt an urge to close my eyes (there’s removal of bandages) I found myself fixed on Gylennhaal’s reactions.  Tatiana Maslay as Erin is so often the voice of reason and Miranda Richardson as his mother plays a significant part in the success of the film. 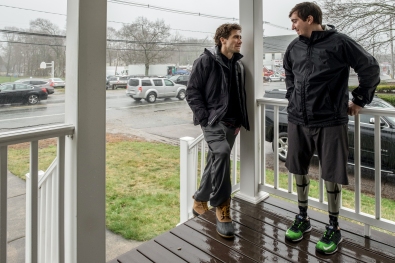 It’s not an easy film to watch and would certainly not be first choice for a festive night out but one man’s determination to succeed should entice audiences.  I did emerge from it feeling like I had been pulled through the wringer but Jeff Bauman’s fight-back deserves to be told and this production has done his real-life story justice.

Stronger is released in cinemas nationwide in the UK on December 8th.  View the trailer here. Many thanks to Nudge for the opportunity to do this.