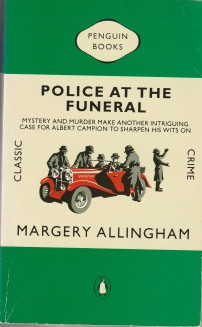 Margery Allingham is the first of the novelists celebrated in Christopher Fowler’s “The Book Of Forgotten Authors” (2107).  I have never read her before but I know that she is an acclaimed golden age of crime doyenne but is arguably less known (and according to Fowler less read) than her contemporaries Agatha Christie, Dorothy L Sayers and Ngaio Marsh.

I’ve had this book sitting on my shelf from some time.  I’d bought it from a charity shop because hers is a name often mentioned in “Best Crime Writers” lists and apparently once discovered she inspires devotion in her readers.  I was also very attracted by the lovely green Penguin cover in this reprint of a Classic Crimes edition.

“Police At The Funeral” was Allingham’s fifth novel, which in itself is an unusual starting point for such a chronological reader as myself and by this time her sleuth Albert Campion is well established.  He operates more as a private eye/police consultant, although in common with many of the early crime writers, not in any real official capacity.  It seems that he is working under a pseudonym as some of the characters know of him under a different name and also know members of his family, suggesting a well-heeled background.  Allingham is not particularly kind to Campion, he is regularly described in terms such as “vacuous”, “bland” and “vague”, so we get the impression he’s certainly no James Bond.  Maybe it is that blandness that allows him to work his way into crime scenes, as he certainly does in this novel.

After a kind of coincidental prelude where we meet some of the main characters Campion is drawn into a case where an intense family dominated by a fearsome matriarch lose one of their members when a disappearance turns into a murder investigation when a bound body is discovered in a river.  As other members of the family begin to make quick exits Campion helps the police.

It starts very well, drifts a little in the middle and reaches a satisfactory conclusion.  I did think Allingham had dug a hole too deep to get out of without a very contrived ending but she manages to extricate things nicely.  There’s a bit more verve than the typical Christie novel, but it does not seem to be as meticulously plotted, based on this novel alone.  It has made me want to go back to her first book “The White Cottage Mystery” to find out more about his gentle mild-mannered yet perceptive  detective.

Margery Allingham, who died in 1966, did receive a surge in sales of her books in 1989-90 when the BBC series starring Peter Davison was shown but according to Christopher Fowler since then she has been under-appreciated.  Although this particular novel  hasn’t turned me into a devotee I would suggest she is certainly worth seeking out.

Police At The Funeral was first published by Heinemann in 1931.  I read a Penguin Classic Crime paperback edition.