Having just got around to reading the novel, which I consider to be the best of the three JK Rowling- as- Robert Galbraith works I was looking forward to catching up with this two-parter shown over the last couple of Sunday nights.

I read “The Cuckoo’s Calling” a few months before the TV adaptation which was early enough to get my own visual impressions of one-legged man mountain Private Investigator Cormoran Strike and of his assistant Robin Ellacott and to initially feel that neither Tom Burke nor Holliday Grainger seemed right.  It took about 20 minutes to revise my opinion of Burke as Strike and admittedly a little longer to see Holliday as Robin but I’m there totally now with both portrayals. 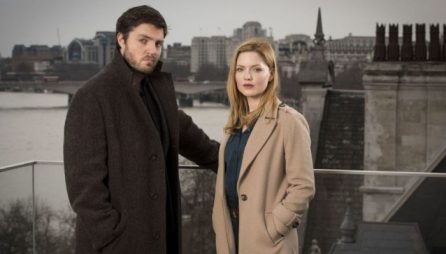 “Career Of Evil” is pushing 500 pages in the hardback edition and I did wonder how this could be compressed into two hour long episodes and how some of the darker fare on offer in the novel would be translated onto the screen for Sunday evening viewing.  That job went to writer Tom Edge, who also had some considerable condensing to do when “The Silkworm” was adapted into two hours.  The first episode seemed to rattle along, and was good quality story-telling and television.  I did have reservations about the second part as  in the rush to get things to the conclusion it inevitably became confusing.  “So who did it then?” my partner (who had not read the book) asked as the end credits came up- not the best result for a crime drama.

In my review of the book I mentioned my difficulty in distinguishing between two of the suspects.  Here I felt that they were introduced with more distance between them so thought they would get around this but there wasn’t the time to devote to them so it became equally confusing.  There was some too obvious sign-posting of one of the main twists in the book and an implausible touch about identity towards the end which would not have been out of place in an episode of “Scooby Doo”.

I quite like it when Rowling gets dark.  It’s like seeing Holly Willoughby swearing on “Celebrity Juice”, it feels so unexpected and naughtier.  Here the serial killer elements which darkened the novel considerably were very underplayed and the whole theme of Body Integrity Identity Disorder (a feeling that a limb does not belong by an otherwise healthy person and needs to be amputated) which was disturbingly explored in the novel was very much left on the shelf here with Cormoran’s appeal to the murdered girl being teen adulation rather than for his missing leg.  Strike was also made more of a suspect here when the plans to undermine his business came across more subtly in the book. Some characters had their parts bumped up (Matthew) and some reduced (Alyssa).  The Blue Oyster Cult, whose role I felt the author had overplayed in the book also moved more into the background.

Still, there were only two hours to play with and as much as for the crime most of us were tuning in to see the relationship and interplay between the two main characters, especially with Robin approaching her nuptials (no Royal Wedding element here as in the novel with its more specific time frame) and here we were certainly not disappointed.  I do like these adaptations but feel here an extra hour was required to bring out the richness there is in the novel, both in terms of plot-line and character.  The book is better than the TV adaptation but I still felt highly involved.

Strike: Career Of Evil was shown in the UK on Sunday 25th Feb and 4th March 2018.  It is currently available on the BBC I Player .