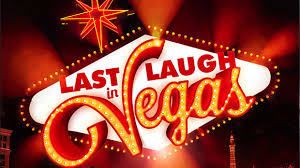 Reality shows provide work for past-their-best celebrities.  Fact.  There’s a whole posse of them (including Debbie McGee, Christopher Biggins, Wayne Sleep etc etc), well known names from 30+ years ago who are happy to go into jungles, sit on boats, travel to retirement places, learn to dance etc etc etc to boost their pensions.  But ITV’s “Last Laugh In Vegas” a five parter which started this week has a slightly different premise.  Here, the celebrities are, for the most part, from an even earlier era of heyday, from 40-50 years ago and they will not be attempting to learn new skills but will be doing what they did then but this time for a new audience.  It’s bringing British variety to a Las Vegas crowd used to megastars and state- of -the- art dazzling technology.  How can it possibly work? 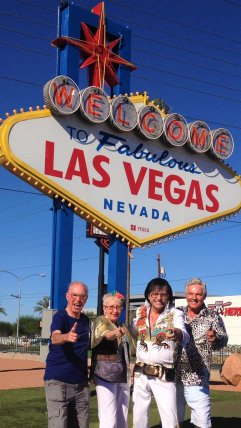 Well….even though I can find car-crash television as compulsive as the next person I’m hoping here that ITV haven’t set up this group of long-ago-more-famous-than-they-are-now celebrities for a fall.  To prevent this, they have brought in someone who is going to help them with their acts which would be more at home on old re-runs of  “The Good Old Days” than working amongst the razzle dazzle of Vegas.  And at this stage, I’m not convinced by this help.  I was vaguely disturbed that the person chosen looked like a white Michael Jackson tribute act, a Vegas performer by the name of Frank Marino.  We were told that Marino is a top comedian which just in itself reinforces the differences between live US and UK comedy and brings home the vast gulf between him and Bernie Clifton, the man who has pretending to ride an ostrich for his laughs for over half a century.  In fact, a modicum of research reveals Marino is best known as a drag act, something ITV is obviously keeping up their sleeves for a later episode.

Much obviously depends on the people chosen for this Vegas show.  The obvious headliners would seem to be Cannon and Ball, but their brand of Northern humour and rapid wordplay seems more likely to bemuse an international audience.  There’s Su Pollard (was “Hi Di Hi” as well known worldwide as “Are You Being Served which turned its cast into household names in America?) who has chosen to sing, which wasn’t actually the best idea even in 1986 when she had an inexplicably big British hit (the #2 “Starting Over”).  Also attempting to revitalise their music careers are a frail looking Kenny Lynch (7 Top 40 hits 1960-65), a vulnerable Anita Harris (3 Top 40 hits 1967-68) and the supremely confident Jess Conrad (just 1 Top 40 hit back in 1961).  Admittedly, all three of these were British film and TV regulars throughout the 60’s and 70’s- old troopers who just kept going after their hits dried up.  The baby of this musical bunch is 64 year old Bobby Crush, thrust into stardom as a teenager by Hughie Green’s “Opportunity Knocks” for his piano-playing and his David Cassidy-on-a-budget looks.  Comedy is represented by the aforementioned Messrs. Clifton, Cannon and Ball together with “star of TV’s “The Comedians”” Mick Miller whose “trademark” long hair of his bald patch Marino is keen to cut.

The whole thing was tinged with sadness as their big opportunity became shadowed by squabbles over bedrooms, over billing and dawning realisation that they may be getting in over their depth.  There is probably a reason why most of them never played American in their glory days.  And yet, I am willing them to shine.

Towards the end of this first offering they watched  a show-reel of their acts in their younger days in what was an affecting few minutes of television.  Thus Su Pollard watched herself impersonate Gracie Fields on a Royal Variety Show (how lost this would be on a Vegas audience), Anita Harris performed in her slinky, sophisticated style, the comics were shown being funny and Mr Conrad and Lynch looked dapper and Bernie Clifton rode around faster on his ostrich.  The passage of time and the trials of being in the public eye, to some extent, for decades, showed on their faces but none more than on a tearful Bobby Crush, who was watching once again the unhappy young man, struggling to cope with sudden fame and sexuality, grinning at the camera as the show went on regardless. 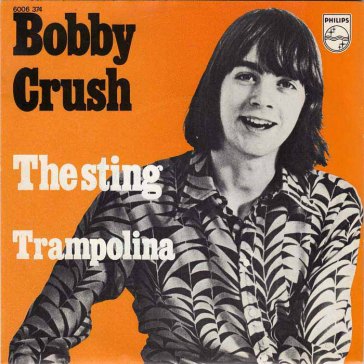 Bobby Crush – then and now

And this show will go on regardless over the next five week and I suspect ITV will be providing us with more tears through the laughter as well as quite a few more moments I’ll be peering through my fingers to watch.

The whole idea might seem somewhat cruel and heartless but I’d like these unlikely Vegas stars to hit the jackpot so I’m going to continue to watch. 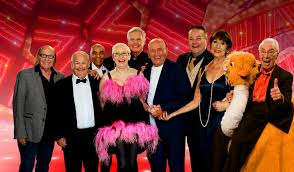 Last Laugh In Vegas is being shown on Tuesdays at 9.00 pm on ITV1.  The first episode is available on the ITV Player