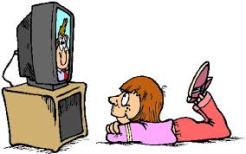 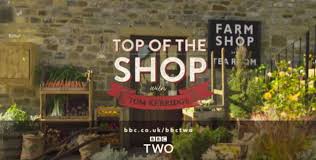 I have a limited idea as to who Tom Kerridge is.  Initially, I did think he was on the last series of “Strictly Come Dancing” but that turned out to be another follically-challenged chef, Simon Rimmer. I did watch one episode of his “Lose Weight For Good” which has spawned one of the biggest selling books so far this year but decided as a television format it didn’t have much originality  and there is a limit to the number of new year-new start-new you programmes you can watch whilst dealing with January blues.  I preferred to stick with the diet-testing Channel 4 Show “How To Lose Weight Well” probably because I like Dr Xand Van Tulleken.

I don’t often watch tv featuring chefs (other than Mary Berry who is more a national institution than chef) but Tom Kerridge is obviously an important enough figure in the world of TV cooking to put his name in the title in this new format which had two of its eight episodes shown on consecutive nights on BBC2 this week. 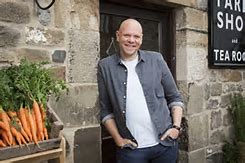 It wasn’t the named presenter but the format which drew me in.  It is only indirectly a cooking show as the food preparation has largely been all done by the time we meet the contestants but it is about passion.  Artisan food producers (of which there are a growing number) bring their products to a farm shop in the Yorkshire Dales to compete against three others to entice shoppers into buying their products and being in with the chance of being judged the best in terms of sales, taste and business viability by judges artisan expert Alison Swan Parente  and  entrepreneur and founder of Mowgli Street Food restaurants  Nisha Katona (no relation to Kerry). 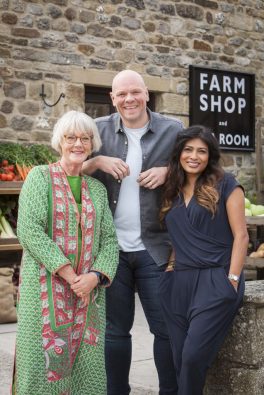 What I like about this format is that being judged here are people who have already put their lives on the line and are so committed to their project that they are selling on some scale, either locally or on-line and are ready to spread their belief to a much wider audience.  In the first episode we had preserves and the competitors were members of a family who made a runner bean chutney from the beans in their garden, an apple and chilli jelly made from the by-products of cider-making, a handmade peanut butter and a passed down the generations recipe from the Philippines of a papaya pickle.  My mouth was watering throughout. 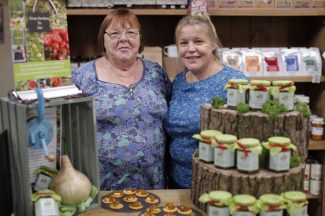 Who will buy our runner bean chutney?

It watered even more in the second episode where the focus was on cheese and there were a couple of goats cheeses (including one from a man who had just one goat with obvious issues of business viability there- a local environment officer who produced the spiced cheese in his shed) an apple-smoked cheddar produced at the weekend initially as a hobby and a Welsh cheddar.  The competitors set up their stalls in the shop and midway through use their produce in a recipe which is sold in the tearoom of the farm shop.  These people are dedicated and so enthusiastic about their product that is hard not to be drawn in and there wasn’t one of the competitors in the first two episodes that didn’t deserve to do well. 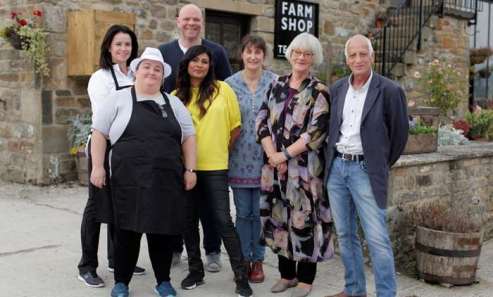 The cheesemakers with the judges

The star of the show for me, however, is the farm shop itself.  It looks a lovely place and I would love to have such a venue walking distance from my home.  The people in that Yorkshire Dales village are extremely lucky and I hope they are doing everything they can to ensure that a place like that continues to thrive.  I live in an area which attracts tourists and has a strong farming pedigree but there is nothing anywhere near as good as the farm shop/tea room with its real community feel shown on the programme. 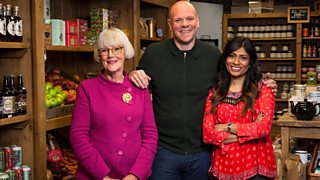 Inside the farm shop

There’s a lot of elements to be considered which makes the programme more fascinating than watching an episode of “Masterchef” (which I have never done).  Pricing for one (there was some very expensive peanut butter which could have potentially restricted sales) and as the winners from each category meet up in a final I’m sure the business elements will become even more of a focus.  In fact, I might have liked a little more idea as to how the judges came to their decisions about the winners, I’m not arguing about the decisions they have made thus far but wonder how much they have taken all their criteria into consideration.

There’s one thing I’m not happy about.  Why do we have to see scenes from both the episode we about to watch and the rest of the series before the opening credits?  This drives me absolutely nuts, as does the “Next Episode” preview at the end.  Do any viewers actually like these?     I know anyone watching TV with me is likely to become exasperated by me reversing and forwarding to get to the moment where the episode I have chosen to watch actually starts.  I might like the odd reminder as to what happened in the last episode if I am watching a Drama series but I don’t need to know what is coming up.  I think I should make a note about the programme-makers who don’t do this and praise them to the skies rather than continually grumble about the majority that do.

Anyway, with this series we have a likeable format with devoted competitors with a proven commitment other than just wanting to be on telly.  I’m certainly going to be sticking with it and, even though it’s been pretty unheralded this far (and on consecutive nights – grr!) this actually could be the “Bake Off” replacement hit that the BBC are looking for.

The first two episodes of Top Of The Shop With Tom Kerridge were shown on Tues and Weds 17/18 April on BBC 2 at 8.00pm.  They are currently available to watch on the BBC I-Player.