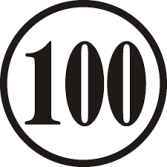 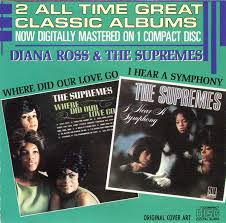 Back in the mid 1980’s the Motown label began a series of releases to capitalise on the vibrant back catalogue CD market.  These releases put together on one CD two albums by one artist giving those of us replacing our vinyl copies with CDs great value for money.  This 1986 release was the best of the lot.

The CD was credited as being by Diana Ross and The Supremes yet when the original vinyl recordings were released the trio were just known as The Supremes.  This two in one put together their 1964 second album, which very much marked their breakthrough,  a superb girl-group album containing three of their five consecutive number one singles alongside their eighth album released just two years later (boy, these girls were being worked hard in the recording studio) which gave them another US number 1 with the title track.  Chartwise, on original release the album “Where Did Our Love Go?” reached number 2 in the US and “I Hear A Symphony” reached number 8.  The innocent girl group sound of chirpy three minute tracks had over those two years evolved into a more sophisticated sound which combined the tracks written to appeal to Young America with cover versions of standards which might appeal more to their parents.  This was all part of Berry Gordy’s strategy to make his acts appeal to as wide an audience as possible.  Occasionally, on some recordings this acted as little more than filler around the hits but here sublime Holland-Dozier-Holland productions ensure that this is a top-notch pairing alongside the first classic Motown album.  Neither albums were UK hits but that says more about the UK album chart of the mid 60’s rather than the quality of either of these recordings.

It had taken quite a while for the career of The Supremes to get off the ground and it would have been likely that had they been with a larger record company they would have been dropped.  But the early days of Motown were very much a family affair, with all the acts supporting one another and schoolgirls Diane Ross, Mary Wilson and Florence Ballard had just hung around at the Hitsville studio until they got noticed and continued to hang around until they were offered songs that could become hits. They had been recording singles since 1961.  Berry Gordy, fascinated by Diane (soon to change the last letter of her name) had seen them as his pet project but hadn’t had a hit with the singles he had written and produced for them and neither had Clarence Paul or Smokey Robinson.  People were referring to them as the “No Hit Supremes”.  It took the genius of Holland-Dozier-Holland’s writing and production skills to ensure that within the space of a few months The Supremes had become one of the world’s top recording artists and it all began with the tracks on this album.

Lamont Dozier and the Holland Brothers at the piano

In fact, the game changer was the title track which kicks off this CD.  An H-D-H song and production which was reputedly turned down by the top Motown girl group of the day, the Marvelettes (who to this point had scored five US Top 40 hits including the #1 “Please Mr Postman”) but before it might be offered to the second group in line, Martha and The Vandellas , the Supremes stepped in.  It’s a simple song, distinguished by a stomping beat and set the pattern of Supremes recordings with Diana as lead vocal and Mary and Florence reduced to little more than “baby-baby – ing”. Although early Supremes releases had switched lead vocal duties once the hit pattern was established it became very much Diana Ross’ group.  The song reached the top of the US charts.  In a UK, obsessed with everything Liverpool in 1964 it got to number 3.  The album was released just a couple of months after the single and it did give fans the opportunity to catch up with previously released singles and B sides together with some new tracks.

The new track that caused the most attention was put out as the follow-up single, something of a rush release in the UK where its predecessor was still in the charts but “Baby Love” just could not be contained.  One of the finest girl group singles ever, it retains the simplicity of “Where Did Our Love Go” and is not so rhythm dominated and just has an extra little sparkle which makes it a phenomenal track.  It topped the charts on both side of the Atlantic and is perhaps the song most strongly identified with the group.  A further US chart-topper “Come See About Me” was less successful in the UK where it stalled at number 27.

Other first class Holland-Dozier-Holland recordings on show here include the track which marked their first actual appearance on the US pop charts the #23 hit “When The Lovelight Starts Shining Through His Eyes” an excellent but unexpectedly raucous sing-along track for the ladies who would be known for their sophisticated cooing.  On some of the earlier tracks there are male voices (apparently the producers themselves and The Four Tops) and this is certainly the case for the rather startling male grunt which explodes mid-way through.  “Run Run Run” has a honking brass and piano sound and male voices in the back-up and a great rough edge to it.  There’s a much softer edge to the subtle soul ballad “I’m Giving You Your Freedom”, “Standing At The Crossroads Of Love” is a charming piano backed mid-tempo number and “Where Did Our Love Go”’s closer is one of the finest tracks Motown never  released as an A-side.  “Ask Any Girl” sounds like a monumental hit that never was with its flamenco feel, dramatic intro and perfect girl-group feel with a nod towards the best of the Phil Spector groups, the Shirelles  and the Shangri-Las.  The couplet “It’s heartaches without number/ Many nights without slumber” is one of the greatest girl group lines.  It’s a stunning track which has that heady combination of youth and sophistication.

Other song-writing and production teams do get a look-in.  Smokey Robinson was one of those that had tried and failed to give the Supremes a hit and it is rather amazing that he missed out with the sultry “A Breath Taking Guy”, which is unusual in that it features all of the girls having a stab at lead vocals.  The other Robinson track “Long Gone Lover” is a nod back to earlier doowop tracks given a girl group slant.  Norman Whitfield would go on to produce some classic tracks for The Temptations but here his “He Means The World To Me” is an attractive Mary Wells-style track.  Label boss Berry Gordy gets in on the action with “This Kiss Of Fire” without challenging the best tracks on the album. 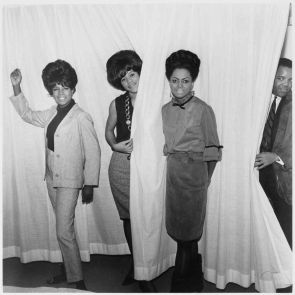 Berry Gordy hiding from The Supremes

It is likely that “Where Did Our Love Go” with its range of very good quality songs and performances and that great trio of HDH hits would have made it alone onto my 100 Essentials list but here we’ve certainly got more for our money with the other twelve tracker “I Hear A Symphony” on the same CD.

We fast forward to 1966 and the Supremes are known worldwide.  Berry Gordy, always the businessman has begun, especially on albums, to extend the fanbase and not just bring in the young, the traditional 45RPM single buyers but also their parents and grandparents and has his eye on the world’s most prestigious night spots for his acts to perform in.  By this time all the exciting rough edges have gone from the music and the girls themselves, smoothed out by formidable Deportment Coach, Maxine Powell, a Motown employee, who both Diana and Mary today would credit for turning them into ladies and who took the “girls from the Brewster Project” and enabled them to mix with VIPs and Royalty – all part of Berry Gordy’s plan for his leading act and, especially, Diana Ross. 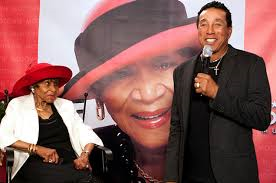 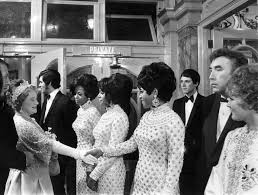 The Supremes meets The Queen Mother

“I Hear A Symphony” reflects this as alongside the four Holland-Dozier-Holland compositions we get show tunes, standards and recent pop hits.  Brian Holland and Lamont Dozier get to produce all the tracks bar one from Norman Whitfield, where the girls tackle the Beatles’ “Yesterday”.  Album-wise since “Where Did Our Love Go” the trio had put out a run of themed long players, tackling the Lennon-McCartney songbook with “A Bit Of Liverpool” (1964 US#21), Country and Western (1965 US#79) and a Sam Cooke tribute album (US#75).  There had also been a non-charting Christmas album all of which showed that the heady days might be over as these albums garnered only a fraction of the sales of “Where Did Our Love Go”.  A more traditional studio album “More Hits By The Supremes” had been a success, reaching number 6 in the US as it featured two more number 1 US singles.

The more sophisticated style can be seen in the title track which became their 6th US chart-topper with its classical musical imagery of symphonies and rhapsodies, it feels more complex than some of the earlier hits.  That had been released a few months before the album, which was very much built around the sound of the hit single.  Thus we get the girls’ intepretations of “Stranger In Paradise”, “Unchained Melody” “Without A Song” together with a touch of Rodgers and Hart and “With A Song In My Heart” an idea which would spawn a whole album of these songs in the future.  Earlier Pop hits Johnny Mathis’ “Wonderful Wonderful” and the Toys’ Bach-influenced “A Lover’s Concerto” are also present.  This might sound a little hackneyed and it does veer dangerously close to the middle of the road at times but the performances and productions are exemplary.  I know the people can be critical of Ross’ distinctive slightly nasal voice but given the right song and production and boy, can she shine as a song stylist.  The back-up work by Florence and Mary also works sublimely on these tracks with both the versions of the Mathis and the Toys hits eclipsing the originals. 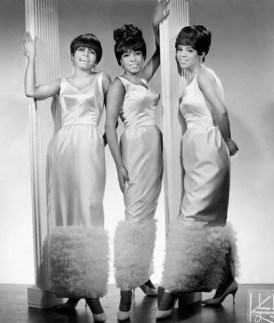 Amongst these you also get the Holland-Dozier-Holland numbers (helped out on two of the tracks by one James Dean).  “My World Is Empty Without You” followed the title track up the charts (US#5) and perhaps better than all these is another of those Motown tracks which should have been a single, the excellent “Everything Is Good About You” which just must have been an influence for Barry White as it sounds so much like Love Unlimited’s “It May Be Winter Outside”.

The album “I Hear A Symphony” reached number 8 on the US pop charts and is a perfect accompaniment to the earlier album on this CD to show just how good these girls can be.  It revitalised the trio’s career and there would be another 6 US number 1 Pop hits before they hung up the matching sequin gowns and Diana Ross went on to solo superstardom.

The two-on-one CD “Where Did Our Love Go/I Hear A Symphony is available used on Amazon UK from £14.99 and in the US from $7.99.  Both albums are available separately and as a download.  In the UK they are also both separately available for streaming on Spotify.