I have resisted this so far.  Now on its 4th season on ITV2 this became a particularly big talking-point last summer, gained a lot of popularity through word of mouth and won awards including a TV Bafta for best Reality Show.  On second thoughts, I haven’t totally resisted it as the idea behind this programme had a previous lease of life in a celebrity version back in 2005 on the main ITV channel.  I did watch a couple of episodes of this and can recall Brendan Cole and one third of Atomic Kitten participating but it was fairly ghastly.  So this is a programme which bucks the trend with beginning with a celebrity version and evolving into a non-celebrity rather than the industry standard of the other way round.

This series relaunched in 2015 in a bright, brash non-celebrity format, helmed by Caroline Flack (who isn’t in it much).  Before this series started it was getting headlines due to the involvement of daughter of EastEnders lead and distant descendant of royalty, “hard man” Danny Dyer.  I thought on Monday I’d just watch the first episode to see what the fuss was all about and I have stuck with it each night since.  It is very much a tweaking of the Big Brother format and really after one week of this I cannot see the point in tuning into the non-celebrity Big Brother ever again.  Here the participants seem less in your face and show-offy, there’s considerable more sunshine in the Majorcan villa than on a studio lot in Elstree to brighten up our duller summer days and the focus of this programme is to fall in love rather than just survive the machinations of the Big Brother producers.

We’ve certainly seen a quest for love umpteen times before from “Blind Date”, “First Dates” to substandard fare like “The Bachelor” (anyone else remember rugby star Gavin Henson having to work his way through a bevy of girls in a similar villa to find out who he fancied most in a TV show that veered from misjudged to completely unwatchable).  The minor TV stations have schedules full of (mainly) imported find-love formats of questionable quality.  So why has this one won awards and become a hit to the extent where it is now a major focus in Summer TV programming and for which, so I’ve been told, more young people applied to compete than applied for Oxford/Cambridge university entrance this year.  Is this the end of civilisation as we know it?

Largely, I’d say no and I think because these characters need to stay on very good terms with at least one other member of the opposite sex to be in with a stab at the prize and as the aim is to “find love” they are presenting a more likeable face than we see on “Big Brother” and its ilk.  There has been the odd meltdown (he fancies me/I don’t know if he fancies me/ he’s told me he’s no longer interested/I fancy him) but it’s all been a lot less tawdry than I was expecting.  It almost feels like secondary school again (admittedly with more flesh showing) where witnessing a couple kissing could be a major conversation topic for days.  And I was at secondary school in the 1970’s- a far more innocent time!

Line ’em up.  Who fancies this one?

Of course, every thing is manipulated to test the bonds of coupledom.  Forced to pair up in a fairly excruciating cattle market type sequence in the first episode, most seemed  happy with their initial choices (a link-up between West End performer Samira and A&E doctor Alex who has looked like a rabbit caught in headlights throughout and who seems so out of his element it is as if he took a wrong turning from Operating Theatre 2 and has gone through some Space and Time portal which has transported him to a sun-soaked villa forced to wear a microphone lead wrapped too high around his midriff seemed questionable) but the show was quick to throw an early spanner into the works and it was this which had me hooked. An extra man was introduced  and in 24 hours had to steal a girl from any other of the couples. 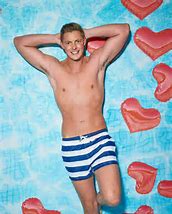 The fact that this man was Adam, a Geordie physical trainer, so handsome and buffed that the other men complained “he did not even look real” and that every girl seemed willing to ditch their first pairing for him was the first indication that this show (is it scripted? Don’t know, don’t really care)  had something deep psychologically going on which would sustain us for the summer.

Is this man even real?

By the end of the first week we’d lost one girl, banished from the island due to a sneaky mid-week introduction of two girls which rapidly changed dynamics and it looks like there will be enough twists in the plot to keep this multiple boys meet multiple girls format fresh.  It’s all far less sordid than I was expecting and I’m not sure whether to be disappointed or not.  I think civilisation is safe once again, for the time being and hopefully the participants will not be saddling themselves with the same level of debt as if they’d gone the Oxbridge route.  Here comes Summer!

I’ll have to update this after a couple of weeks.

“Love Island” is shown nightly on ITV 2 at 9pm.  Previous episodes are available on ITV catch-up services and for those for whom this is not enough I have noticed that Netflix has recently added earlier series to their output.