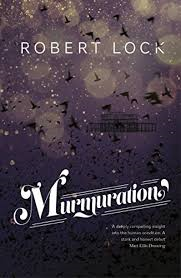 I have a thing about piers. As soon as I step onto one with all that planking where the sea is visible through the slats I always get a rush of the sense of history of the place far more than I would with a building. I remember very clearly standing on the beach whilst a burning Brighton Pier blazed in an incredibly sombre recollection. I spent many late afternoons in Brighton watching the swallows swoop and swirl around the ruins of the structure. The pier in Shanklin where I now live was destroyed in the big storm of 1987, washed into the sea taking with it generations of history and memories. All this, the sense of history and the growth and decline Robert Lock has incorporated into this debut novel. And the swooping of the swallows has given this book its title and its starting point. This is why I was delighted that Legend Press sent me a review copy.

The swallows’ movements recall a number of historical points of the life of the pier and its inhabitants at an unspecified seaside resort. We begin magnificently in 1863 with the recent erection (pun intended) becoming the home of bawdy music hall comic Georgie Parr, an evocative characterisation and a life more than tinged with tragedy. We move to 1941 where the pier is used as an observational outpost and the swallows become involved in a wartime miracle. There’s a less successful mid-60’s section with the pier coming to the end of its golden era and onwards to the 1980’s where local archivist Colin Draper seeks to solve a pier-based mystery whilst coping with the declining health of his mother in a painfully sensitive, touching section and then on again to present day where loose ends are tied (perhaps a little too tightly).

The undeniable quality of this book lies in its great sense of time with the pier standing as a central focus to these very human lives. The writing is of a high quality and Robert Lock shows he has what it takes to become a significant writer of historical fiction. Plot-wise the combination of detective story with the odd touch of magical realism doesn’t quite flow quite as masterfully as other elements in the book but this is a strong debut and would be a thought-provoking quality holiday read. I polished off a chunk of it on the seafront in front of Ryde Pier and it felt very fitting to Robert Lock’s vision of the British seaside, past and present.

Murmuration was published by Legend Press on 12th July 2018 . Many thanks to the publishers for the review copy.