I first encountered African-American writer Zora Neale Hurston’s 1937 novel “Their Eyes Are Watching God” back in 2011 where it became one of my Top 10 reads of the year.  This is a book which has grown steadily in reputation, particularly this century and now is a recognised American classic.  Hurston produced three other novels and was a significant folklorist of tales of black America as well as a short story writer, playwright and essayist.  This book caused quite a stir when it was published for the first time earlier this year, 58 years after the author’s death.  I’d highlighted it back in January in my Looking Back, Looking Forward post as one of nine titles I was looking forward to reading this year and now I have.  (I couldn’t resist a peep back at that post- I’ve read just two of these so far although a number have to still to be published).

Subtitled “The Story Of The Last Slave” this came about as a result of a series of interviews in 1927/8 with Oluale Kossula who had been snatched, aged nineteen, from his West African home and brought over on the last slave ship “The Clotilda” in 1860, an illegal act carried out long after the abolition of the trans-Atlantic trade.  The group of men responsible for this escaped any charges of piracy and trafficking by destroying the evidence by scuppering the ship on its landing on American soil.

By 1927 Kossula was the last known survivor of this crossing and thus the last known first-generation slave.  Renamed Cudjo Lewis he spent over five years as a slave in Alabama for one of the men responsible for his capture and following emancipation was instrumental in the setting up of Africatown- a settlement of former slaves. 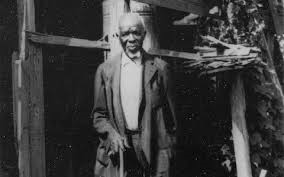 Hurston visited Kossula, by then widowed and lonely and brought him peaches, melon and ham to get him to open up and used his words to take down his life story.  It is a heart-breaking tale which demands to be read.

That Hurston never found a publisher for this work in her lifetime seems extraordinary.  Cudjo Lewis had been previously interviewed by others (in fact even by Hurston herself) and was known as the last voice of this previous era.  There’s a hint of the suggestion that Hurston’s reputation in her early years had been dented by prior claims of plagiarism which could have rendered her account as untrustworthy.  That this account was put together by an African-American woman would have also limited its publication appeal.  There was also some contemporary nervousness about what Cudjo Lewis had to say.  His most disturbing revelation being that he was trafficked by neighbouring tribes rather than white traders.

Kossulu began his journey into slavery in a barracoon, a shoreside prison where captured men, women and children were stored until deals could be made with the white traders.

Hurston lets Kossulu speak in his own dialect which might seem initially off-putting to the modern reader but as with her later celebrated novel meaning soon becomes clear and the reader is likely to be captivated by the rhythm and poetry of the language.  The actual text of the interviews moves along quickly and is supplemented by probably an equal amount of accompanying material including a Foreword by Alice Walker and an Afterword by Deborah G. Plant and a number of Ossulu’s stories that Hurston, as folklorist and anthropologist took down verbatim.  This is a work which manages to be spine-chilling and endearing and is a thought provoking, always relevant read.

Barracoon was first published in the UK as in 2018 by HQ.  It is available in paperback.