The evenings are only just drawing in and the battle for weekend ratings have started.  In a couple of weeks we’ll see the Clash of The Titans when Saturday night juggernauts “X Factor” and “Strictly Come Dancing” (I’m not counting last night’s non-essential “pairing” show) come face to face in what will no doubt be a very one-sided affair but much is also being made of these two newcomers on Sunday evening schedules in which a clear winner also appears to be emerging, both critically and ratings-wise.

“The Bodyguard” had a one week head start and decided to go consecutive nights for the first two episodes to draw us in, “Vanity Fair” did the same a week later, a strategy which no doubt we’ll be seeing more and more.  “The Bodyguard” had much of its audience hooked within the first fifteen minutes with a breath-sapping bomb on a train scenario.  Carbon Dioxide levels in the atmosphere must have been depleted as the viewing population drew in a breath and held it.  (Yes, I know it’s biologically more complex than that but I’m making a point).

I had very high hopes for writer Jed Mercurio’s latest series as I have only recently got round to watching (on Netflix) his “Line Of Duty” and have spent the last few months bingeing on this extraordinary police drama.  I’ve watched three series but haven’t seen the one everyone really talks about starring Thandie Newton (that isn’t on “Netflix” but  remain hopeful that it will appear), so no spoilers please. 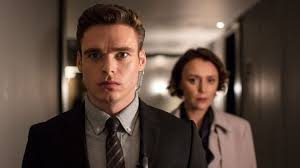 What makes “Line Of Duty” such gripping television is its sheer unpredictability.  It is unusual to watch TV in this day and age with no idea as to the direction it will go and Mercurio has certainly achieved this again with “The Bodyguard”.  Each of the three episodes I’ve seen so far will have rooted audiences to their seats by its dramatic shifts.  (That barometer of public taste “Gogglebox” returned this week and one of the highlights of opener was the looks of complete disbelief on assorted faces as episode three revealed its twist).  Keeley Hawes who became the ultimate victim in “Line Of Duty” despite being a tough and uncompromising character may very well be revisiting these traits as Home Secretary Julia Montague with her Thatcherish sharp edge yet the very human weakness for the man detailed to protect her.  And Richard Madden’s turn might just make Sunday night viewers forget that Aiden Turner’s “Poldark” and Tom Hiddleston’s “Night Manager” ever existed.  I know some opted to give this a miss fearing a re-tread of Costner and Whitney scenarios but the relationship, although central, is just one small facet of this television diamond.  There is so much going on and whilst we know what is happening when it happens (unlike many TV dramas with a political slant) we have no idea as to the direction this will go in and that makes for essential television. 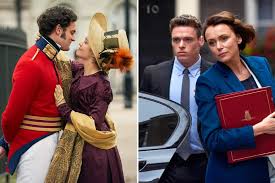 So, how can we compare this to “Vanity Fair”? They are polar opposites yet their scheduling and their respective channel’s confidence in them is demanding comparisons be made.  With “Vanity Fair” of course we know the direction it is headed from its existence as a novel and the number of previous adaptations.  I love the book although I haven’t read it in a long time.  It seems that every time I plan to re-read another version comes along making it seem less of a priority.  Here I think the show has been a victim of its pre-transmission publicity which suggested something youthful, vibrant and edgy.  Younger actors have been cast in main parts and we were told to expect modern music.  I have so far been aware of Madonna’s “Material Girl” at one point which seemed too obvious a choice and somewhat clunky in its scene.  I was expecting this version, created by Gwyneth Hughes to up the cool factor in much the same way Baz Luhrmann did for Leonardo DiCaprio in old Will Shakespeare’s “Romeo and Juliet” back in 1996.

I don’t think this has happened.  It hasn’t sparkled in anything like the way I was expecting.  I did enjoy the opener more and yet the scenes in Vauxhall Gardens which had the potential to display the series’ wares felt surprisingly low-budget for a channel hoping to push this as the new “Downton Abbey”.  Some of the casting doesn’t feel quite right.  I’m not totally at ease with the younger male characters, especially Dobbin nor Martin Clunes as Sir Pitt Crawley.  I do like Olivia Cooke who is playing Becky Sharp but she seems to be playing her as more opportunistic than manipulative and I’m not sensing the joy that was in the best portrayal I’ve seen by Reese Witherspoon in the 2004 film version where Julian Fellowes’ screenplay aimed for a more sympathetic character but Reese didn’t lost the glint which is so essential.  This version also has a great set of portrayals from the likes of James Purefoy, Jonathan Rhys-Meyers and Rhys Ifan as the stolid Dobbin. 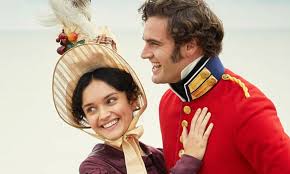 By Episode 2 I was wilting, Frances De La Tour’s arrival boded well but I was still wondering whether I’d actually last the course of five more episodes.  Perhaps I should just re-read the book for my dose of Thackeray.

It seemed as if Sunday nights were going to be superb for television with the launch of these two highly-anticipated shows.  One is certainly proving this, the other is showing room for improvement.

Both Vanity Fair and The Bodyguard are shown at 9pm on Sunday evenings.  Catch up editions are available on the ITV hub (VF) and BBC I-Player (Bodyguard)